Movie Catch-up: The Girl Who Kicked the Hornets Nest (2009) 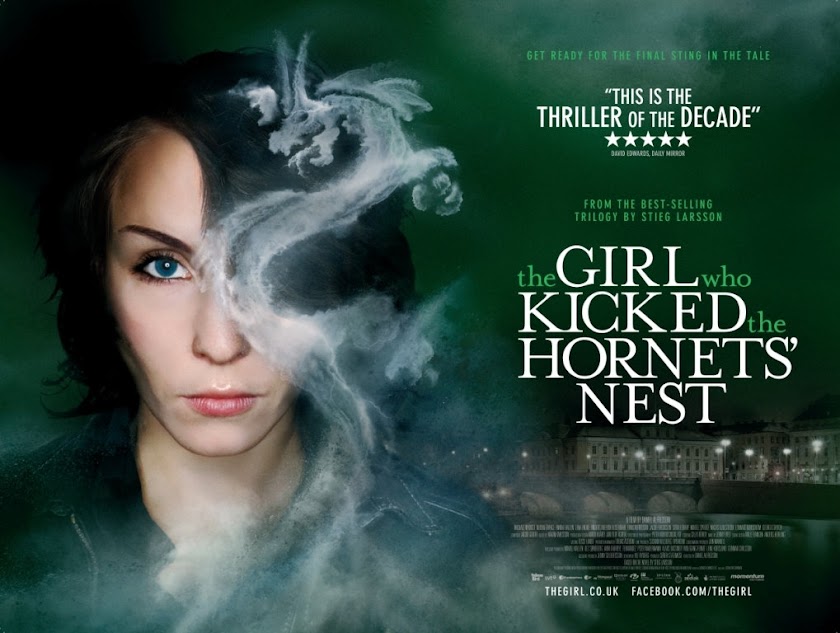 Author Stieg Larsson’s Millennium Trilogy grinds to a close in two and a half hours of TV-movie dullness.

After the excellent The Girl with the Dragon Tattoo, you knew the trilogy had gone off the rails when disturbed Goth heroine Lisbeth Salander’s father was revealed as a Soviet KGB defector. It took The Girl Who Played with Fire out of edgy serial-killer thriller territory into seen-it-before conspiracy non-thriller, with a disfigured dodgy Russian and a blonde East German side kick the size of the Berlin Wall and no sense of pain.

The Girl Who Kicked the Hornets Nest is less of the same, spread over a longer running time but with added espionage and a ludicrous court-room drama thrown in.

Beginning with Lisbeth’s (Noomi Rapace) surgery to remove a bullet from her brain, her convalescence is ruined by charges of multiple murder, while journalist friend Blomqvist (pastry-faced Michael Nyqvist, Mission Impossible 4) races to publish the state conspiracy at his daft, skeleton-staffed Millenium magazine.

He is joined, suddenly and conveniently, by a Constitutional Protection squad (how very Swedish) to shore up the integrity of the state being dragged down by corrupt intelligence officers lef over from the Cold War – The Section, I presume this translates with more resonance in Swedish too.

It better had, since The Section consists of two pensioners, a couple of bank managers an odd-job man and two Serbian ex-snipers plus some secretaries in a block of flats.

Lisbeth’s old nemesis, the perverted doctor Treborian from the asylum, is back to get her re-comitted, meanwhile, half-brother and full-time psycho Niedermann commits whatever murders he feels like while on the run.

Lisbeth and Blomqvist have almost no screen-time together, which leaves Blomqvist and his bland Journalism-101 crew flapping about, starting arguments they don’t finish, seething in an understated Swedish fashion, and producing a fat magazine with no visible circulation or income.

In a world where we’re supposed to trust no one, Blomqvist cuts a deal and joins the police team in thirty seconds flat: no bona fides, no checks. Clearly investigative journalism works differently in Sweden, or Swedish movies anyway.

This is the problem with Hornets Nest. Somehow it over-compresses to the point of silliness AND drags on. There’s a couple of decent action scenes, but the rest of the content is tension-free.

The only bright spot is Rapace as Lisbeth, ever fierce and vengeful, an Ibsen heroine with attitude, exuding trauma in every frame. She rocks up in full punk regalia for her day in court, running rings around the lamentable prosecution lawyer. It’s actually funny. But I don’t think it’s supposed to be. Much like the rest of this un-thrilling thriller.

Oh well, bye-bye Swedish Millenium, onto the US remakes. RC

Robin Catling gained degrees in both arts and technology which led to a diverse portfolio of employment. A freelance systems analyst, project manager and business change manager for the likes of American Express, British Airways and IBM, he moved on to web design, journalism and technical authoring. He has also worked in film and television, both behind and in front of the camera, including productions by Steven Spielberg, Martin Scorcese, Ron Howard and Ridley Scott. A qualified three-weapon coach, he runs West Devon Swords teaching sports fencing to all age groups, and in recent years qualified with the British Federation of Historical Swordplay to teach medieval and renaissance combat in the Historical Western Martial Arts.
View all posts by Robin Catling »
« How-to: Deal with Elephants with Agendas
Opinion: The Death of Privacy, Part Two [Guest Post] »