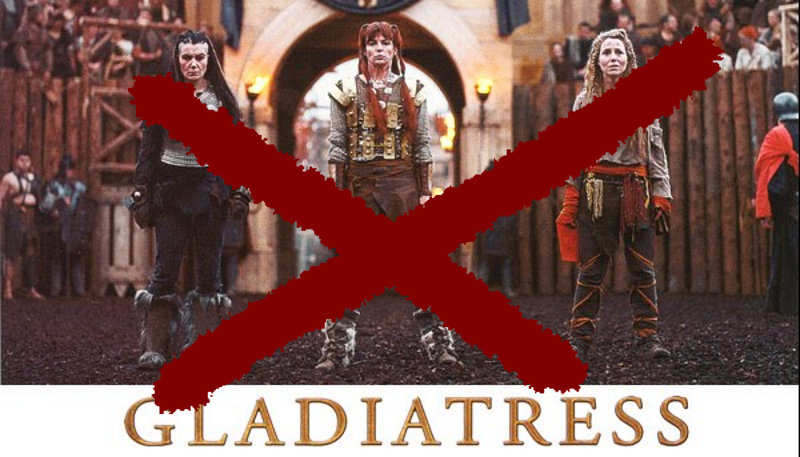 This is a public service announcement. Never EVER be tempted to watch Gladiatress. This alleged ‘comedy’ from Channel 4’s Smack the Pony comedy team misfires on every level. It’s like Vogon poetry – you may have to gnaw one of your own legs off in order to survive.

Ostensibly a sword-and-sandals comedy adventure spoof about three “unlikely heroines” who try to thwart the Roman invasion of Britain in 55 B.C., Gladiatress fails in all departments.

So badly does it fall into self-parody of their own post-feminist counter-comedy show, it’s impossible even to identify what they thought they were producing. It is time-travel back to the worst 1970’s comedy franchise spin-offs. No wonder it failed to get a release on completion in 2002.

The one thing you could bet on with the Smack the Pony girls (Sally Phillips, Fiona Allen and Doon Mackichan) is that one lame sketch would limp quietly into another with the occasional funny line or sight gag. The movie just goes on like the longest hidden-camera, public embarrassment show ever. Without Ashton Kutcher to end it. At least they didn’t go on holiday somewhere (re. Are You Being Served, worst British movie of all time).

The comedy isn’t comic, the adventure isn’t adventurous; the acting is terrible in the way that (British) comedians making feature films have deluded themselves into thinking is great: Morecambe and Wise, Cannon and Ball, Tony Hancock, Dick Emery – all fell into the abyss trying to leap from stage or TV to the big screen.

Actually I quite like the Morecambe and Wise movies. Just thinking about them lifts me out of the depression brought on by Gladiatress.

However cringe-inducing were Frankie Howerd’s TV antics in Up Pompeii in the 1970’s, they are Shakespeare compared to the Gladiatress festival of gurning, grinning and mumbling accompanying a wagon-load of fart-jokes, fanny-jokes and general toilet humour. The dialogue is, of course, entirely anachronistic and about as Imperial Roman as Carry On Cleo, altogether lacking the cheek, brio and fun of that movie institution that you’ll wish you were watching instead.

Even Gladiatress‘ central conceits don’t work. The Brits are stereo-typically downbeat and British; the Romans are played by more Brits with gob-smackingly bad parody Italian accents. What persuaded well known British character actors such as David Hayman (Trial and Retribution) and Ronan Vibert (Hatfields and McCoys, The Borgias) we may never know.

A painful experience for all concerned. Don’t watch it. RC