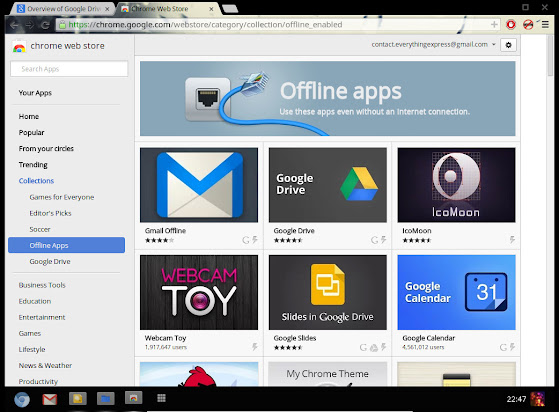 So, if nearly everything is cloud based, does that mean your Chromebook is a brick if no connection is available?

Contrary to other reviews I’ve read, not true at all. Go to:
https://chrome.google.com/webstore/category/collection/offline_enabled?utm_source=chrome-ntp-icon, and you’ll find roughly 500 apps that can be run without having an active connection (but,  of course, you have to have an active connection to get apps that work without one – how ironic).

So, if you can’t run programs,  and you’re limited to apps, how do you perform basic office functions such as word processing?

Enter Google Drive, a poor man’s version of MS Office. Those buying new Chrome OS devices get 100GB storage space free for 2 years (at $5 monthly as the normal fee, that represents a savings of $120), and with that comes a series of online programs (or are they apps, too?) to handle office functions. This includes Google Docs, Sheets, Slides, Forms and Drawings, all self-explanatory in naming (nobody can accuse Google of wasting marketing funds on program titles). These are worthy competitors to the likes of LibreOffice, and do contain most of the basic functions, with the major difference being the method of saving files. For example, instead of the usual .doc you might find in Word, Docs uses .gdoc, but files downloaded away from the Google drive can be reset to formats including .docx, .txt, .rtf, and even .odt (normally associated with open document formats used by LibreOffice Writer).

Word of warning, though. Google Drive’s office offerings cannot open Open Document (.odt) files. I found this out when I created a review in Docs, downloaded it as .odt and then decided to go back for editing only to discover Docs couldn’t open it  again.

One good point about Google Drive is that you can set the parameters to allow for offline editing, with any changes made without an internet connection being uploaded the next time one is present. It does have a tick in that spreadsheets and drawings can only be viewed, but not altered; yet documents and presentations can be changed.

For those tethered to LibreOffice, there is the rollApp app which installs a link to http://www.rollapp.com (any OS can use this site). Pay a visit and you’ll be greeted by nearly all of the programs normally found in nearly all Ubuntu variants, even games, but there is a price to pay. Since these are actual programs attempting to operate in a browser  window, there is some lag (I could out-type the cursor), but I got used to it.

What of music and video files? Take your choice of Play Movies or Play Music, and, while either one is as plain as beige paint, they are instant (less than 2 seconds from click to play), and do an admirable job  even if controls are limited to volume, rewind, reverse, and stop/play. The only failure experienced on my end was an inability to play .flv files, but those  are easily converted to mp3 or mp4 and then played.

Chances are if you look long and hard enough in the Web Store, you’ll find something to replace your favorite program. For Facebook and Skype, that replacement was imo messenger (all lower case), and, for Quicken or MS Money, the Finance41 app will probably do the trick (for those needing just a checkbook, there are several nice templates in Sheets in Google Drive).

What about Pictures, Documents, Videos, and the like? Sorry, no folders for them, nor can you add any to the Files area directly. The only option is to add sub-folders to either Downloads or Google Drive, or insert a flash drive or SD card at which point a new folder is created.

In short, anything you download or add to your computer from flash or other external drives goes to Downloads, never mind the fact you may not have downloaded any of it. Anything you want shifted to the cloud goes to Google Drive (yes, you can use Dropbox, Spideroak, and others, too). End of story.

Ah, but now for the bizarre aspect of Chrome OS – printing. Unlike wired, wireless or networked printing formats, this OS uses Google Cloud Print, a system in which your files are sent to a server that eventually connects to your wireless cloud-aware printer and finishes the job.

Notice the word eventually. In my testing of two documents (both just one sentence) one took nearly 5 minutes to finally print, and the other took almost an hour. Checking online, I discovered some complaints that jobs were delayed nearly a day before finally printing. Welcome to server based printing – where you’re at the mercy of somebody’s server in Timbuktu.

Not only that, but this OS is snotty about the printers it’ll play nice with. Go to http://www.google.com/cloudprint/learn/printers.html# for a current and extremely limited listing. Unless you have one of these hanging around, the only other option is to have a Windows, Apple or Linux computer with the Chrome browser installed in which case it can be set to accept your Chrome OS documents for printing (not as complicated as it sounds). AS