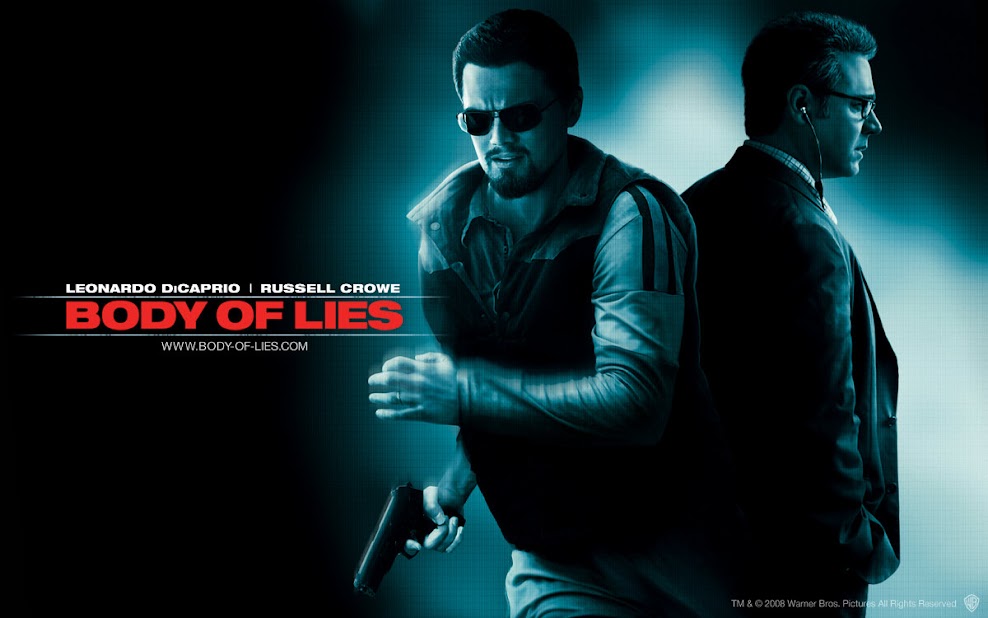 What better way to catch the un-catchable terrorist leader than invent a more successful rival? Cue Mid-East travelogue, complete with every location sub-titled even though the script tells you each one.

And Britain’s Mark Strong (Kick Ass, The Eagle) makes the least convincing Jordanian intelligence chief, despite his talent. Maybe it’s the wig and the tan.

Ridley Scott’s experience and brio make for an uneasy cocktail of glossy thriller elements in largley squalid urban settings, while writer Monahan’s script, adapting a successful novel, keeps the increasingly unruly Scott on the rails for a coherent narrative. Yet Body of Lies still adds up to less than the sum of its parts.

Unlike Matt Damon’s full-on action Bourne series, or his flip-side, American Tinker-Tailor Cold War tale The Good Shepherd, Body of Lies has little new to say about the murky world of espionage. Okay, it’s not Bond, but it’s also not The Quiller Memorandum, The Ipcress File or Syriana.

Like Inception, the shakedown of a master terrorist contains cons-within-cons, but by whom? As the different intelligence teams play against each other, the terrorists become the second string in the movie, almost incidental by the end.

DiCaprio’s half-realised romance with an Iraqi nurse becomes just another plot device to move the script along. We never really believe in it despite Golshifteh Farahani’s luminous presence.

There is far too much exposition delivered by mobile phone and some dubious computer hackery from Simon McBurney (The Borgias) littering the screen, as if someone had a check-list of mandatory modern spy tropes.

Better than the hack-fest of Robin Hood (and that’s just the script), Body of Lies sits mid-table in Scott’s portfolio; like Crowe’s character, lacking invention or any real passion, for which DiCaprio’s overwrought performance cannot compensate. RC

Robin Catling gained degrees in both arts and technology which led to a diverse portfolio of employment. A freelance systems analyst, project manager and business change manager for the likes of American Express, British Airways and IBM, he moved on to web design, journalism and technical authoring. He has also worked in film and television, both behind and in front of the camera, including productions by Steven Spielberg, Martin Scorcese, Ron Howard and Ridley Scott. A qualified three-weapon coach, he runs West Devon Swords teaching sports fencing to all age groups, and in recent years qualified with the British Federation of Historical Swordplay to teach medieval and renaissance combat in the Historical Western Martial Arts.
View all posts by Robin Catling »
« Review: Chrome OS Part Two [Guest Post]
Opinion: Employability – I Can’t, I Don’t »