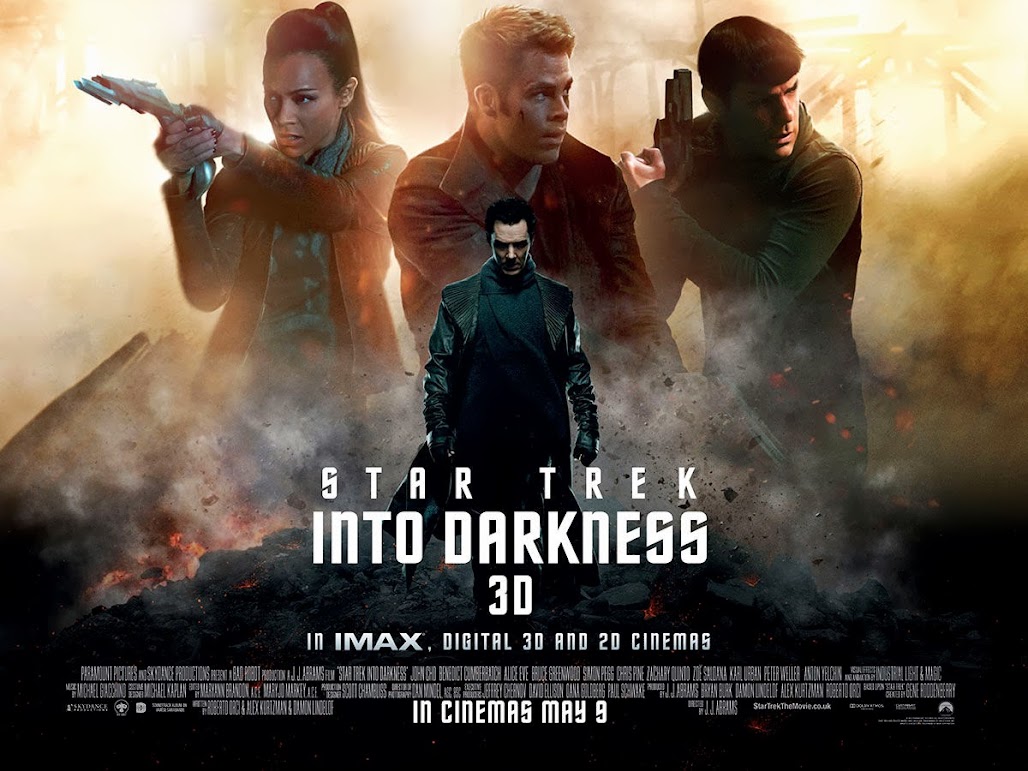 I will stand up and confess to having been a bit of a Trekkie [Trekker?] since I was eleven, and am hugely enjoying JJ Adams’ re-booting the Star Trek universe into a second time-line, allowing for a lot of references, homages and in-jokes, and why not. So, to the good [mostly], the bad [a few minor kvetchettes] and the ugly [an unfortunate uniform style choice].

Catapulted into a near-disastrous adventure at the beginning, the zippy pace is set, although I found the level of violence coupled with the extraordinary amount of crying a rather uneasy blend.

Chris Pine (Unstoppable, People Like Us) is the young action hero personified, and in certain camera angles he is Kirk – maybe it’s the nose – and his performance is heartfelt, energetic and entirely true to the character.

Benedict Cumberbatch (Sherlock) is all splendid villainy and pathos, bringing an unfamiliarly pumped-up physicality to the role and dealing with finesse with a script that all too often resorts to the monologue.

Karl Urban (Bourne Supremacy, Lord of the Rings) is pitch perfect and seriously underused as Doctor McCoy – it’s not about impressions, but he’s nailed it. A shame then that the script mostly left him trotting out well known McCoy-style sayings. Here’s hoping that a third instalment allows him more to do.

Along with some background artists there are only two main female characters, and in true Trek tradition we get one in her underwear, plus two in bed with Kirk and a rather creepy camera up-an-actress’-skirt shot during an action sequence. Yes, it’s true to the original series’ approach but I was disappointed that with so much else re-imagined here they couldn’t have moved on a bit from sixties thinking.

It all looks superb (even allowing for that bloody lens flare effect again); future London and San Francisco are hyper-realistically evoked and the alien planets, space scenes and post-911 imagery are visually fabulous.

Yes, it’s a bit of a re-run of a previous film. I’d avoided spoilers and didn’t see it coming so was genuinely surprised (although how one man could manage to get seventy or so pods into a high security weapons array without help or being spotted – never mind: spoilers), and with a cameo by Leonard Nimoy and the filling in of another little bit of Trek history with the arrival of Dr Marcus, it’s a satisfying, funny and exciting addition to the canon. PH

Speaking Well In Public offers a portfolio of public speaking courses for business, performance and social occasions designed and developed by Philippa Hammond, combining her skills and techniques as an award-winning trainer, working actor and voice artist. Philippa is a member of Equity and the Chartered Institute of Personnel and Development.
View all posts by Philippa Hammond »
« News May 2013
How-to: Install Ubuntu 12.x On Older Hardware »