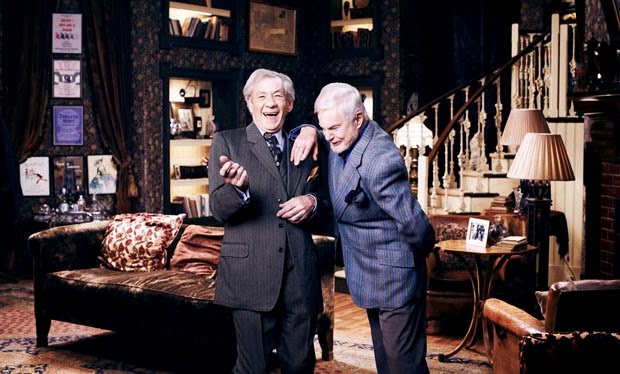 Time travel is possible and it’s here as a working scientific phenomenon. That’s the only explanation I can find for Vicious, ITV1’s latest situation comedy, which is barely a ‘sit’ and contains no ‘com.’

Starring Britain’s two foremost theatrical knights, Sirs Ian McKellen (The Hobbit, X-Men) and Derek Jacobi (Henry V, Underworld Evolution) as an elderly gay couple, with guests Frances de la Tour (Hugo) and Marcia Warren, Vicious is based on the idea that two high-camp gay pensioners can be as waspish and bitchy as they like and everyone will scream with laughter.

Sadly the high-camp bitchiness in Vicious is less American sitcom Will & Grace (from which writer Gary Janetti graduated), and more a horrible travesty of limp 1970’s sit-coms such as Are You Being Served. It’s false in every note and gesture, made worse by the inexplicable laughter track, the gales of laughter merely blowing the tumble-weed across the screen at high speed. Unlike the gags.

This is fossilised comedy from a different era; the overt homosexual couple is the only modern thing about it, but completely undercut by gross queeny stereotypes, pensioner jokes and supposed quick-fire lines that fall off the diving board, banging their heads on the way down. What were Ed Bye and Mark Ravenhill thinking when they took on this dinosaur? That it was going to compete with sharp US sit-coms with genuine pace and wit?

This is depressingly like watching a 70’s British end-of-the-pier show (now we know why the pier shows ended) as McKellen and Jacobi telegraph their performances to the empty upper circle at the Barbican. Even de la Tour seems to have forgotten the laser-precision of the intimately squalid farce Rising Damp which made her name as Ms. Jones.

Contrast with the The Office-style comedy The Job Lot scheduled straight after; nothing new, but painfully funny.

Related: Review: The Thick of It – The Inquiry

Sue Corsten is a film and TV make-up artist based in the UK.
View all posts by Sue Corsten »
« How-to: Install Ubuntu 12.x On Older Hardware
Opinion: From tumblr to Tumbleweed – I Give It a Year »