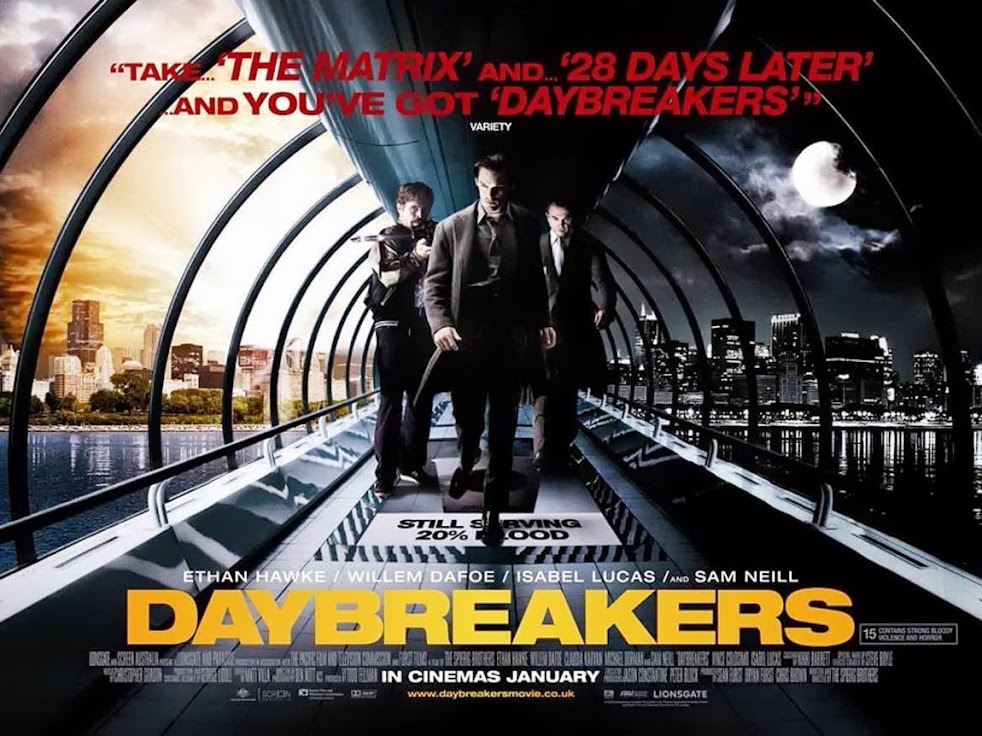 There’s no dialogue for almost ten minutes in the well-crafted set-up – vampires have taken over the planet, humans are an endangered species farmed for food, their dwindling numbers creating a food crisis that threatens to wipe out vampires and humans alike.

Ethan Hawke (from the superlative 30 Days of Night) returns to the vampire genre as the guilt-ridden, chain-smoking and wimpish Edward Dalton, chief haematologist (a word never used – too long for the target audience) for whom the search for a blood substitute is proving fruitless.

Rejecting the vampire diet of blood, Dalton begins to degenerate into the bat-like mutant vampire Sub-siders, then aids the human resistance.

Daybreakers posits the society that would result if vampirism really did exist in modern times, although one could foresee considerably greater strife before the vampires’ well-ordered military state emerges. However well it begins, though, two things prevent Daybreakers supporting itself to the end.

The plotting is one: the set-up, as in Blade, is an entirely medical and scientific form of vampirism; all the symptons and effects, none of the supernatural. Which would be fine except, determined to make an action movie, Daybreakers leaves the Blade Runner darkness and heads into the daylight.

There is an unique car chase in the midday sun; but it’s still a car chase. We get some horrific immolations of vampires in daylight, but we also get some comically over-the-top exploding vampires whenever a stake is driven through them. The all-action, splattery, butcher’s shop finale trips over into standard comic-book horror fare, racing to a tidy conclusion and cliched closing shot.

And Hawke’s ‘cure’ for vampirism makes no sense at all: part one makes for some interesting effects sequences, but medically, that, and the rabbit-out-of-a-hat second part are entirely too convenient. What can you say? It’s a vampire movie.

The second stumbling block is casting. Hawke is admirable as a transformative actor; from Gattacca, to 30 Days, Assault on Precinct 13, Hawke takes his roles seriously, even in genre movies such as this. Without his nervy, scared and guilty scientist, this would be just another vapid action flick.

Playing opposite him, Aussie TV and film award-winner Claudia Karvan as resistance fighter Audrey is so subtle she almost disappears, but  they could have got a Megan Fox clone and really blown it.

No, the twin problems are Willem Dafoe and Sam Neill.

Dafoe (Spiderman, Platoon) long since slipped over into self-parody; his toothy, rubbery features and quirky delivery belonging to a sub-genre of acting known only as Dafoe-ism. Called on to be the ultra-cool, charismatic resistance leader Lionel Cormac, nick-named ‘Elvis’, Dafoe gets to spout pop-philosophy as the mentor-figure bringing Dalton back to the light.

Sam Neill (Sirens, Jurassic Park) does his other Sam Neill ‘thing’ as repulsive, leathery corporate reptile and vampire-in-chief Charles Bromley. Harking back to previous horrors Omen III, Event Horizon and In the Mouth of Madness, Neill manages to crank it up to eleven on the Sinister Scale without doing anything noteworthy.

To be fair to both, neither of them break into their upper-range of demented and shouty, as the Spierig’s keep a lid on the performances; it’s the baggage that both of them bring that undermine their scenes.

With echoes of Blade Runner, Gattacca, Marvel’s vampire hunter Blade, and numerous sci-fi and fantasy actioners (Del Toro among them), Daybreakers takes an admirable run at re-inventing the genre, but doesn’t have the balance of ingredients to lift it into the top league. RC

Robin Catling gained degrees in both arts and technology which led to a diverse portfolio of employment. A freelance systems analyst, project manager and business change manager for the likes of American Express, British Airways and IBM, he moved on to web design, journalism and technical authoring. He has also worked in film and television, both behind and in front of the camera, including productions by Steven Spielberg, Martin Scorcese, Ron Howard and Ridley Scott. A qualified three-weapon coach, he runs West Devon Swords teaching sports fencing to all age groups, and in recent years qualified with the British Federation of Historical Swordplay to teach medieval and renaissance combat in the Historical Western Martial Arts.
View all posts by Robin Catling »
« News: Microsoft Announces Xbox One
Art: Artists Open Houses 2013 Second Weekend »