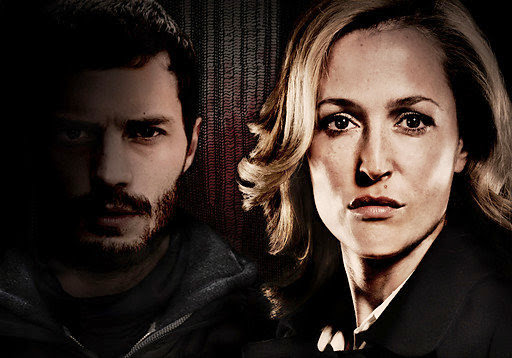 Gillian Anderson does Prime Suspect as Silence of the Lambs amongst the hard men of Belfast.

The Fall ticks all the boxes for contemporary crime drama: hard-edged career woman straight off a Vogue cover (it will sell to the Americans), shot in a gritty, washed out style after Wallander and The Killing (it’ll sell to the Scandinavians); surrounded by lots of gruff alpha-males including John Lynch (Labyrinth, Alien Hunter) in an unusual setting (Belfast’s cauldron of hate as a backdrop).

None of which would be anything special but for the Thomas Harris structure; we know who is the serial killer and see his portrait revealed as Gibson investigates. Perhaps it helps that the writer and creator is Allan Cubitt, who also wrote the TV series Prime Suspect.

Anderson, as always, proves a chilly leading lady. Anderson’s superbly detached performance makes Gibson consummately professional but difficult to like. Competing with Helen Mirren’s hard-drinking Jane Tennyson, Gibson instead goes in for an unabashed one-night stand with a local detective who promptly gets shot by the Provos. Anderson reacts so coldly, we are as shocked as the officer investigating his murder. It makes Gibson an excellent lead detective for the lurid serial killings of local women, but a poor leading character with which to identify.

Yes, she has the mind of a computer and is a crack shot (US market take note) but Anderson’s liking for enigmatic women is undercut by her constant pouting and staring into middle distance. It’s Amanda Burton’s Silent Witness all over again; count them, or play it as a drinking game and it soon gets very close to French and Saunders’ parody Witless Silence.

Against Anderson and grizzled cardboard cut-out Lynch as Jim Burns, her boss and one-time lover, Jamie Dornan  (Once Upon A Time‘s Sheriff Graham) turns out TV’s best serial killer in a while, Paul Spector (get it, Spectre?). Quiet family man and bereavement counsellor by day, brutal predator by night. Okay, Dornan is a former Calvin Klein model, so the show gets him oiled up and shirtless for much of the time, but this is his breakthrough acting performance as he proves he can do father, counsellor and psychopath.

The psychological drama is well devised, performed and packaged, so the surprise is not that the BBC Two thriller has become the channel’s most successful drama in eight years, but that it’s buried on BBC2.

We already know there’s a cliff-hanger ending for episode five and a second series on the way, so the biggest question is whether The Fall will lapse into the new Clarice and Hannibal show or inherit The Killing‘s crown? RC

Robin Catling gained degrees in both arts and technology which led to a diverse portfolio of employment. A freelance systems analyst, project manager and business change manager for the likes of American Express, British Airways and IBM, he moved on to web design, journalism and technical authoring. He has also worked in film and television, both behind and in front of the camera, including productions by Steven Spielberg, Martin Scorcese, Ron Howard and Ridley Scott. A qualified three-weapon coach, he runs West Devon Swords teaching sports fencing to all age groups, and in recent years qualified with the British Federation of Historical Swordplay to teach medieval and renaissance combat in the Historical Western Martial Arts.
View all posts by Robin Catling »
« How-to Avoid Fake and Insecure Apps
Art: Artists Open Houses 2013 Third Weekend »