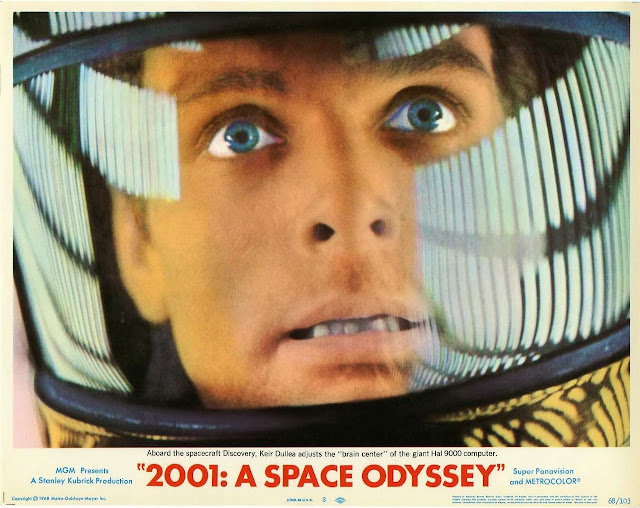 Stanley Kubrick’s 1968 opus took science fiction to respectability as a meditation on technology and humanity. Ground breaking in it’s use of special effects and with a classical music soundtrack, 2001 is one of the most recognised, most lampooned and most mystifying movies ever to reach a mass audience, many of whom walk away asking “what was all that about?”

A movie so full of firsts, it’s difficult to know where to begin.

No aliens, no laser guns, no robots; instead, Kubrick and Clarke’s screenplay, based on Arthur C. Clarke’s story The Sentinel, takes us through the ascent of man from dumb hominid to the first murder committed with a bone tool, all brought about by the intervention of the mysterious alien monolith – the black slab.

It’s a sort of alien Swiss Army knife that recurs – the first on Earth educates our ancestors, the second on the moon transmits confirmation of man’s journey into space, the third above Jupiter triggers Kier Dulea’s long acid-trip journey across the universe and returns him to Earth as the Star Child.

Dispatched by scientist Dr. Heywood Floyd (William Sylvester), consummate professional astronauts David Bowman (Keir Dullea) and Frank Poole (Gary Lockwood) are dispatched to the destination of the alien transmission on the spaceship Discovery. When sole survivor Bowman shuts down HAL and reaches Jupiter, instead of aliens, all he gets is the ultimate chemical trip through space and a philosophical conundrum; imprisoned with himself in a comfortable baroque mansion which is a relativity trap of past, present and future.

It is all very sixties. The design is gorgeous, a perfect time-capsule of what we thought the future would be like, from props to costumes to spaceships. Special-effects legend Douglas Trumbull (Silent Running) and Kubrick spent more than two years creating the most ‘realistic’ vision of the coming Space Age – you know, the one we didn’t get. Kubrick nods to consumer culture, product-placing the defunct Pan-Am as a space-line. Kubrick always knew how to produce spectacle (Spartacus) and even by today’s standards of CGI, the largely-hand-made and hand-drawn effects remain very impressive.

Then there’s HAL, the ship’s computer and archetypal psychotic machine intelligence, intent on homicide after a programming error.

What isn’t so sixties is the classical music sound track, with some wonderful sequences accompanied by Straus Walzes – spaceships landing to The Blue Danube – and most famously, the first shot of the Space Wheel to Strauss’s 1896 Also sprach Zarathustra, the most famous and best ‘reveal’ moment in cinema.

Then, as now, the critics will tell you that 2001 is too long and too dull, the script rather worthy and opaque, that it suffered Kubrick’s obsessive-compulsive approach and inability to edit down. The short version is two hours twenty, some say the restored director’s cut lasts as long as the actual ascent of man from chimp to astronaut.

On the other side, admirers enthuse over it’s languid pace, and it’s assured place as the first and only real ‘art-house’ sci-fi movie. The more ‘trippy’ elements cemented Kubrick’s reputation as a counter-culture subversive (after A Clockwork Orange) and much over-used epithet of ‘visionary’ director. 2001 was one of the most popular films of 1968, although you can bet many were sceptics going back to try to penetrate the conjurer’s tricks and those who ‘didn’t get it.’ RC

Robin Catling gained degrees in both arts and technology which led to a diverse portfolio of employment. A freelance systems analyst, project manager and business change manager for the likes of American Express, British Airways and IBM, he moved on to web design, journalism and technical authoring. He has also worked in film and television, both behind and in front of the camera, including productions by Steven Spielberg, Martin Scorcese, Ron Howard and Ridley Scott. A qualified three-weapon coach, he runs West Devon Swords teaching sports fencing to all age groups, and in recent years qualified with the British Federation of Historical Swordplay to teach medieval and renaissance combat in the Historical Western Martial Arts.
View all posts by Robin Catling »
« How-to: Employability At Interviews
Random Subjects Made Simple – Are you a Mosquito Magnet »