Review: Empire of the Sun – Ice on the Dune 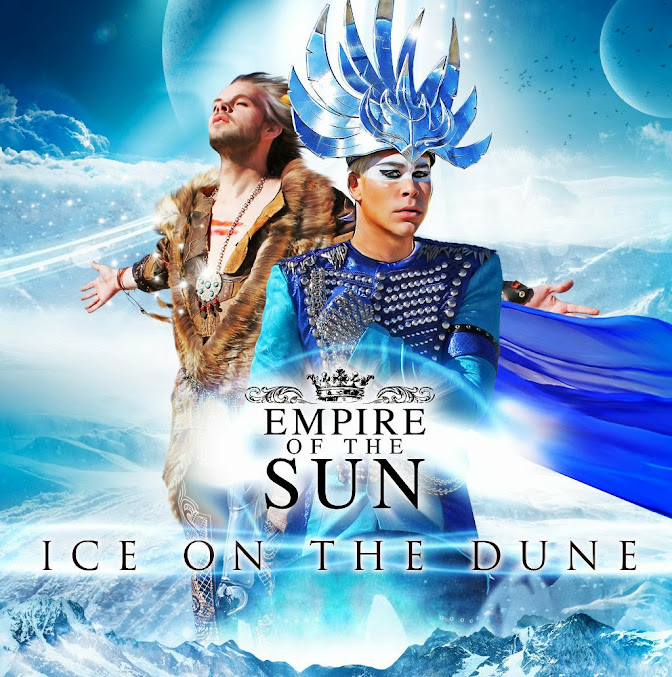 Another slice of layered, dreamy Aussie art-pop from sometime back in the 90’s – with a bit of Euro-pop thrown in.

Empire’ arrived Internationally in 2008 with a dream-scape album of electro-pop, masks, art-school concept videos and a distinctive sound that promised much.

Cue second album and… apart from the lyrics getting more bland, Empire doesn’t seem to have gone anywhere.

You could be charitable in looking at the ‘Dune sleeve: Luke Steele, (ex-Sleepy Jackson) in Mayan head-dress and cape, and Nick Littlemore (ex-Pnau) in animal-fur jerkin and tribal amulet. You could applaud a 70’s prog-rock revival, a return to a deliberate theatricality. Or you could just say what a pair of pretentious t****. The sleeve notes introduce this as a concept album, old-school: a back story about four priests with “the spirit of wild animals” and the theft of a magical jewel by the King of Shadows.

This is the problem I have with Empire, the art-school pretentiousness and high-fallutin’ song-writing ideology that is undercut by the Wiley Coyote drop off Cliche Heights at some point in every song.

Track one, Lux, is a sort of overture to the main work. Unfortunately it sounds like the theme tune to a bad sci-fi show on a cheap cable channel, or Blake’s 7 from the 80’s.

DNA is back to Empire’ business as usual, familiar up-tempo layered sounds of synths and sampled vocals. Dreamtime is a special place. Who knew?

Single Alive has a radio-friendly, stacatto-falsetto chanted bridge leading into a typical Empire’ chorus. Alive. But rather than make me feel so alive, as its supposed to, I just went ‘meh.’

Concert Pitch bounces along like a Howard Jones number from 1985, a decently crafted pop ballad but nothing we haven’t heard before.

Ice on the Dune is a signature Empire track, readio-friendly but with the underpinning of 70’s prog-rock keyboard moodling.

Awakening slows things down a little, with a swooping vocal. The layers and layers of production start getting a little tiresome by now, not to mention the Euro-pop thing creeping in – remember Double, Captain of Her Heart? This may be a new discovery in Australia, but the way to pop respectability it ain’t.

I’ll Be Around with it’s Chris Rea backing track reminded me of On the Beach. Which is nice. I don’t think they were aiming for nice.

Old Favours is the sort of mid-tempo, dance instrumental they use under the montage for the sports round-up on the TV news. Undoubtedly a good banker for them, it’s typical of this album and Empire in general: atmospheric, evocative, yet all a bit lacking in substance.

Celebrate. I’ve listened to it twice and I can’t remember much about it. It came and went like candy floss without celebrating much.

You just know a track with the title Surround Sound is going to be too clever by half.

Disarm is all plinky plonky synth. I kept thinking of Rick Wakeman or Greg Lake (ELP). I know ‘retro’ is ‘in’ at the moment but… really?

Keep a Watch, the big finale, is bombastic, overblown and with Steele’s most irritating, groany, constipated vocal to the front and some session singer in the background wailing away like it’s a Pink Floyd album circa 1978. Then there’s the sonar pinging into the distance. Dive, dive, dive.

And so looking past the Eurovision Song Contest costumes, Empire of the Sun becomes the Emperor’s New Clothes: for all the concept and stage-craft, the pair turn out fairly standard Euro dance tunes – “I’m loving every minute because you make me feel so alive”; “let’s push through four dimensions… let’s resonate together.”

Robin Catling gained degrees in both arts and technology which led to a diverse portfolio of employment. A freelance systems analyst, project manager and business change manager for the likes of American Express, British Airways and IBM, he moved on to web design, journalism and technical authoring. He has also worked in film and television, both behind and in front of the camera, including productions by Steven Spielberg, Martin Scorcese, Ron Howard and Ridley Scott. A qualified three-weapon coach, he runs West Devon Swords teaching sports fencing to all age groups, and in recent years qualified with the British Federation of Historical Swordplay to teach medieval and renaissance combat in the Historical Western Martial Arts.
View all posts by Robin Catling »
« Opinion: No Summer Blockbusters, Please
Humour: iPhone Store [Guest Post] »

One thought on “Review: Empire of the Sun – Ice on the Dune”