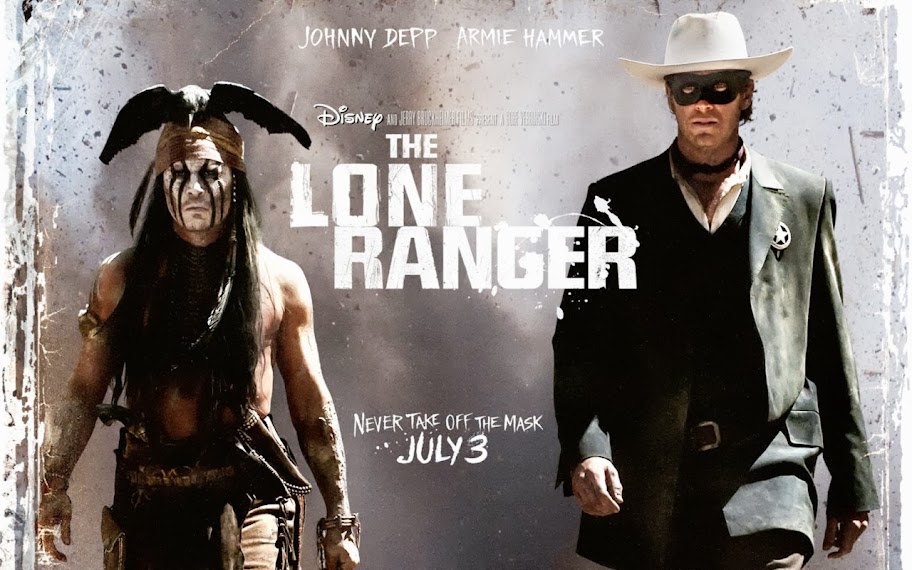 How does a film from the team that created the huge hit Pirates of the Caribbean’fail at the box office?

Here’s how: take a children’s radio and TV Western adventure series and remake it, cram in a mix of styles that don’t match, rack up an extraordinary level of violence, amorality and gore and add cannibalism, prostitution and a random threat of rape and you end up with a film that doesn’t know who its audience is.

It’s presented as a tale told to a child by a disconcerting Old Tonto at a 1930s sideshow, but one moment it’s ‘don’t take it seriously, do it all tongue in cheek’ – then the next, there’s a gross scene reminiscent of ‘Soldier Blue’.

The story makes a big sprawling mess out of a simple tale – greedy businessman grabs control of the railroad, the shareholders, the silver supply, the military, the Comanches and the law alike with no real indication as to how. Enter an East Coast fish out of water lawyer out to avenge his brother’s murder, helped by his enigmatic Comanche sidekick. The story of how Tonto as a child came to be a crazed outcast weaves neatly into the main theme but the tone sits uneasily with the comical note struck by the the scenes between Tonto and the Lone Ranger.

This suggests that the whole film is a failure, which isn’t the case; there is a lot to recommend it:

Some standout performances – Armie Hammer as the good hearted hero driven to extraordinary deeds, Depp as the possibly magical, probably insane and infinitely resourceful Tonto and a surprising number of Brits including Ruth Wilson, Helena Bonham Carter, Tom Wilkinson and a brief glimpse of James Frain.

Costume design and creation is extensively credited, and they are superb – a world of Victorians desperately hanging onto genteel civilisation and respectability in the face of a hell of heat, filth and sweat beautifully realised. Loved the bad guy beguiled by lacy pretty things and the tawdry dancehall tarts, and Bonham Carter’s scrimshaw ivory leg concealing a deadly weapon is a grim, glamorous delight. The Tonto make-up is interesting – it’s based on a painting called ‘I am Crow’, but more immediately inspires comparisons with Jack Sparrow in monochrome mud mode.

The work of the CGI and stunt teams seamlessly merge, with silent movie ladder gags, terrific horsemanship and homage to classic adventure serials with sterling top-of-the-railway-carriage stuff [and underneath, too]. The steam engines are huge, weighty beasts, the film credits mechanical horse-makers and puppeteers, and it’s impossible to tell the model and the digital from the real. You’ll never look at bunnies the same way again.

But in the end? Two young film makers once created Star Wars and Indiana Jones, recreating vintage adventure serials for a new generation, yet Hollywood appears to have forgotten how to do it in the twenty-first century. With ads and trailers we were in there a good three hours, and it felt like it. PH

Speaking Well In Public offers a portfolio of public speaking courses for business, performance and social occasions designed and developed by Philippa Hammond, combining her skills and techniques as an award-winning trainer, working actor and voice artist. Philippa is a member of Equity and the Chartered Institute of Personnel and Development.
View all posts by Philippa Hammond »
« Review: Recommended Reads from a Century of Children’s Literature Pt II
Humour: Tiny Grass [Guest Post] »