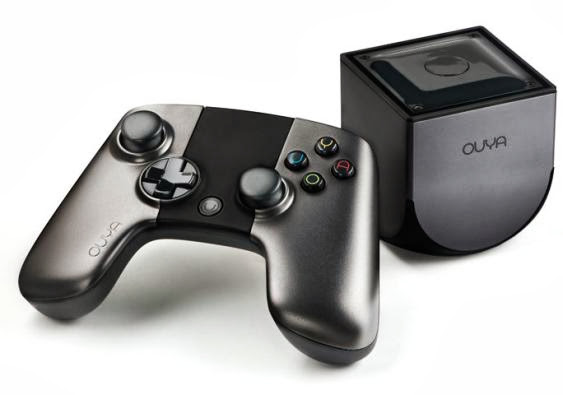 It all began in July 2012 with a Kickstarter fund for the creation of the Ouya, an independent gaming console based on the Android operating system. They asked for nearly $1m. In the end, they received almost $9m with 63k backers. Impressive stuff. But is the final unit impressive?

THE KIT
The Ouya itself is tiny. It’s approximately 2.5” square (about the length of your index finger), has a round on/off button on the top, and can safely fit in the palm of your hand. On the back is an HDMI port, USB port, network socket, and a connector for the power supply. The controller is wireless, has a small touchpad (above and between the d-pad and right stick), and is about the size of your average Playstation/Xbox controller, but not as heavy. It has the usual array of buttons (four), two sticks, one d-pad, and four shoulder buttons. Between the d-pad and right stick is the Ouya button. Just for completeness, the Ouya comes with a modified Android OS which is listed on my box (as of July 2013) as: Build Number: 1.0.328_r1 Software Version: 1.0.6 Android: 4.1.2

THE SETUP First boot is a bit fiddly—it involves setting up your wireless, signing up to Ouya, then giving them your bank card details (for app purchases)—all done through the controller. Took a while, but I got there in the end. Pairing your controller to the console is easy enough. You just hold down the Ouya button (on the controller) until it flashes two lights (from the four at the top of the controller) at which point it’s done and you can proceed. My only reservation, thus far, was giving my bank card info to a screen that could very well have been insecure. Your browser will at least display https or a nice reassuring padlock symbol, but the Ouya just presents a pretty screen. At least try and assure me it’s secure!

First stop is ‘discover’ to install some games. Under discover, we’re given categories such as featured, VIP (for games only on Ouya), several playlists (from developers I believe), showcase, trending, and genres. Searching is done using the yellow Y button.

Selecting a title takes you to its info screen with options such as download, rating, and more info. Heading back to the main screen and clicking ‘play’, you’re presented with the games you’ve installed. You can either click the icon to load it, or press the blue ‘U’ button to get info on the game to uninstall it if necessary. From the main menu you can click ‘make’ to get access to a web browser (via the software option), or click ‘builds’ for developer stuff. The ‘manage’ option (in the main menu) presents you with; account, controllers, network, notifications, and system.

All menu items are quickly displayed and there’s no lag that I could see.

As of writing, there are only about 200 games for the Ouya so the range is quite limited. The only things to hold my attention were the emulators and the little crane game. Others are interesting but are either terrible to look at (some classed as ‘retro’) or quite slow (I’m looking at you Amazing Frog). Thankfully, though, you can install Plex and TuneIn on the Ouya so even if you’re not a gamer you can stream media to your TV using the Ouya.

SIDE LOADING
Side loading is the process of installing apps/games using the Android APK file rather than the Ouya store. Initially it’s fiddly, but the easiest way is to use the Ouya browser to install the Amazon appstore. Yes, you can install the Google Play store, but you’ll have to hunt the internet to find an APK file as Google doesn’t readily distribute it (even once I did get it installed it failed to run). Once the Amazon appstore is installed, you can browse (using the touch pad) through all their stuff too, but, and it’s a big but, not everything will work on the Ouya even though it’s Android. Things like Netflix work just fine, but take things like double taps to select items.

CONCLUSION
Will it usurp Sony or Microsoft? Definitely not, but for about £99 ($99), it’s an Android game console (or media player) that you can plug into your HD TV. It’s also still early days for the Ouya. It’s a bit late in coming, but I’m sure (I hope!) it’ll garner a great amount of developer/hacker interest. Build quality is a bit ropey, but for £99 you really can’t expect much! RT