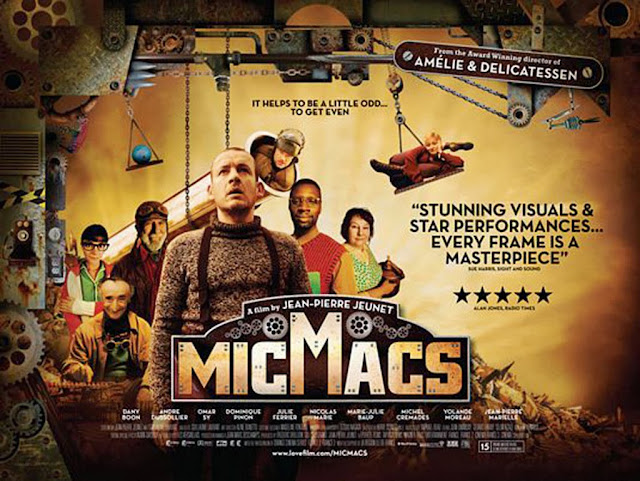 Stylish and inventive, Jean-Pierre Jeunet has intrigued us with dark fantasies Delicatessen, City of Lost Children, delighted us with Amelie, A Very Long Engagement, and frightened us with the underrated Alien: Resurrection. Micmacs is overloaded with Jeunet tropes and an excess of that rare thing – Gallic whimsy.

Micmacs à Tire-Larigot (“Suspect Activities” or “Jiggery-Pokery” at “Tire-Larigot” – the underground lair filled with extraordinary inventions and sculptures.) wears its’ heart on its’ sleeve. As a darkly comic satire on the arms industry framed in a Robin Hood, Ali Baba, TV’s Mission Impossible ‘caper movie’ it is drenched in Jeunet’s warped humour, a cast of bizarre caricatures, sight gags and nonsensical plotting.

Unfortunate orphan Bazil (Dany Boon) has his bomb disposal officer father blown up by a French landmine, and years later is himself shot with a French bullet. Unemployed and on the street, busking as a Chaplain mime, Bazil falls in with the underground eco-recycling gang of Mama Chow, whose daughters disappeared in a fairground hall of mirrors. Her team of human Wombles includes Slammer (Jean-Pierre Marielle) an elderly master criminal, contortionist Elastic Girl, Remington; a black ethnographer and impersonator; and Buster (Dominique Pinon), comic grotesque and Jeunet regular, a failed human cannonball.

On discovering the rival arms dealers’ factories, and the homes of their ego-maniacal executives, Bazil determines to exact his personal revenge on them both.

Micmacs is another Jeunet classic, in which child-like morality fable, casual cartoon violence sometimes tips over into adult nastiness; the denouement (how appropriate) is an immaculate construction of a great long-con, worthy of any Mission Impossible episode.

Jenuet’s movies are where the whimsical, bizzare and grotesque get wrapped in warmth, humour and satire. Even though this is modern day Paris, everything has a broken-down, retro feel to it, shot through halucinatory distorted lenses and filters. A Lewis Caroll, Through the Looking Glass Paris. An imagined Paris that’s less populated but much more interesting and organic than the chaotic mess that’s really there.

Jeunet always sides with the underdog, the marginalised, the eccentric, the outcast. With the bullet lodged in his brain, Bazil immediately identifies with old lag Slammer, who escaped the guillotine because the blade got stuck in his neck; the rest of the gang have equally odd back-stories.

Micmac’s faults, however, are many. Firstly, it’s too long; the long-con goes through too many set-pieces, the comic asides are many and drawn out. Buster’s rant about his Guinness record and his failed human cannonball action sequence are there for the trademark Pinon show – the Gallic goblin is as watchable as ever, but it holds up the main plot. Even the arms dealers are lovingly painted as pantomime corporate villains in great detail, right down to the private collection of celebrity body parts. The whole thing could use a tighter edit.

It’s impossible to adequately describe; if you have time, see it. RC