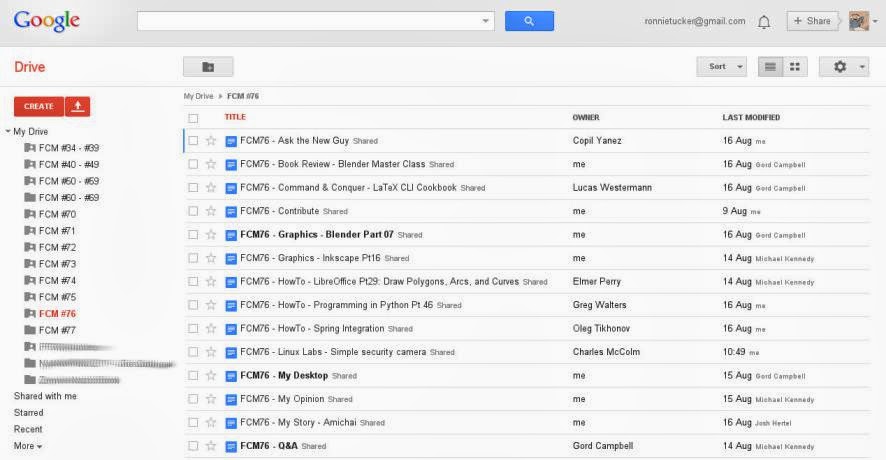 As best as I can decipher, Drive is the cloud based file storage system that hosts Docs, Sheets and Slides, the three basic apps that comprise the Google Office suite, which is given the generic title of Google Docs. Technically, when you create a doc in Docs, it’s also in Drive.

While that may seem a little confusing, installation definitely isn’t – there is none. Go to https://drive.google.com and if you have a Gmail address you merely sign up. If not, get an address and then sign up. Doing so gets you a free 5GB storage space for life with fee-based options going up to somewhere around 1TB. Got a new Chromebook or Chromebox? You get 100GB for 2 years on select models.

Otherwise, the only requirements consist of having a computer, tablet or smart phone, some form of internet connectivity, and the Chrome[*] browser.

Sounds great? Well, it is, but remember the following:

Following the protocol gets you this:

That’s your menu. Get used to it as you’ll be using it a lot. And what of the rest? Well, as you’ll find out as you read on, Google believes in simplicity, so the Create button is your ally here, as it does most of the grunt work.
As for the individual apps (they are not called programs), you get the following: 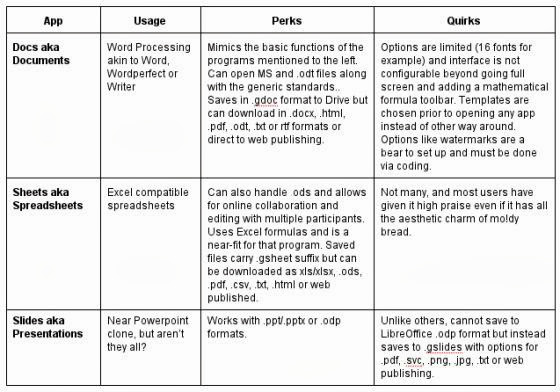 So what do they look like? Take a gander right. Top to bottom: Docs, the word processor. Gee, ain’t it exciting? Sheets for spreadsheets. Generic but functional. Slides, with colour!

No, you haven’t gone colour-blind and I haven’t gone cheap on black-and-white photos – these are your colour schemes with the first two being devoid of anything but murky shades of grey, black and white. Unfortunately, that’s the price of admission for products that use on-line sourcing – you pretty much have to take what’s offered and lump it otherwise.

Only Slides comes with any sense of colour in the base format, and that’s only if you set the slides themselves to have colour. Otherwise it’s the same blasé format as everything else.

Can you jazz them up a bit with options? Not really, since this is an on-line only proposition. You can perk up the Chrome browser a bit but not Google Docs or Drive. And what of that blue button in the upper right corner? That’s the Share option in anything put on Drive. Clicking it opens a box of options allowing for the sharing of your files via Gmail, Google+, Facebook or Twitter.

Of note, I went full-screen for the screen shots which explains the absence of any browser borders.

As you’ve probably figured by now, these are lightweights compared to commercial versions. However, you are getting them for 100% less than those other options (excepting LibreOffice). As with anything free, there are peccadilloes and oddities to be aware of.

First, most reviews state any of these can handle MS and Open-Document files, but is this true? Sort of, but you have to understand the multi-step procedure (and these do apply to other non-Google formats, too):

These problems also crop up in Sheets and Presentations, too. Use of options in your original files not available in Google Docs is a guaranteed snafu, but, to be fair, that has always been a problem with switching files back and forth between suites. Anybody transferred files back and forth between MS Office programs and the Libre Office equivalents can testify to this.

Second, you must get accustomed to a certain change in procedures.

And if you want to see a real case of hyperactivity, take a gander at the autosave function in any of the apps. As soon as typing commences so does autosave. No waiting for a couple hundred characters – as soon as you stop typing or have a pause for punctuation or a brain spasm, it’s saving.

Otherwise, it’s business as usual although your internet connection determines just how well it works. If you have a slow connection, you will notice a certain lagginess. A couple times I found it quicker to just shut down my wireless and go to off-line mode when my signal was too weak.

OFFLINE EDITING
And what of off-line editing, a function that’s highly touted by Google? It works but only if you know the procedure.

Unfortunately, it’s not automatically set and must be requested via the main menu. Once established, it applies to all files created in Docs, but I have seen users give up on Docs because off-line editing is missing only to later discover it failed because they forgot to initiate the process (hint to Google – make it automatic).

Additionally, off-line files are stored in Chrome’s cache. Take a hint from me and don’t get overzealous with the cache cleaning, especially if you don’t plan to go on-line before using off-line editing again. Cleaning the cache also wipes out the off-line files (don’t worry—they aren’t deleted except from cache).

Of note, there are some reviews that state just Docs and Slides worked off-line; however, it appears Sheets is in the mix now, too.

Users must also realize that off-line means you’ll have to go on-line in the near future so Drive can auto-save the changes (it’s done seamlessly to the point you’ll never notice). If for some reason your cache gets wiped before going on-line again, your changes are goners.

FINAL ANALYSIS
So what keeps me coming back even with a boatload of restrictions and some odd twists?

It’s basic, it’s free and it works on nearly any computer, tablet or smart phone out there. Just try that with most office suites. While MS, Corel and even OpenOffice/LibreOffice are making strides in cloud suites, they haven’t quite hit the mark yet, or, in the case of the first two, are just too expensive for the average person.

Does it fit the bill for everybody? Absolutely not. I imagine students doing complex documents and spreadsheets will find it lacking, as will certain professionals. However, the average person will probably find it quite useful, especially those doing work on a wide variety of portable devices. Several times I’ve found myself on a tablet and come up with a brainstorm. Docs allows me to just visit the site and make notes or start a new file without having to fire up the laptop (which may not even be close at hand).

Okay, so it is a little quirky, carries limited menu options and has all the artistic appeal of badly worn asphalt, but has anybody ever really noticed that many suites today have become so complex it’s like learning a new language? Maybe less is better in this case, just realize your limitations and work with them. AS