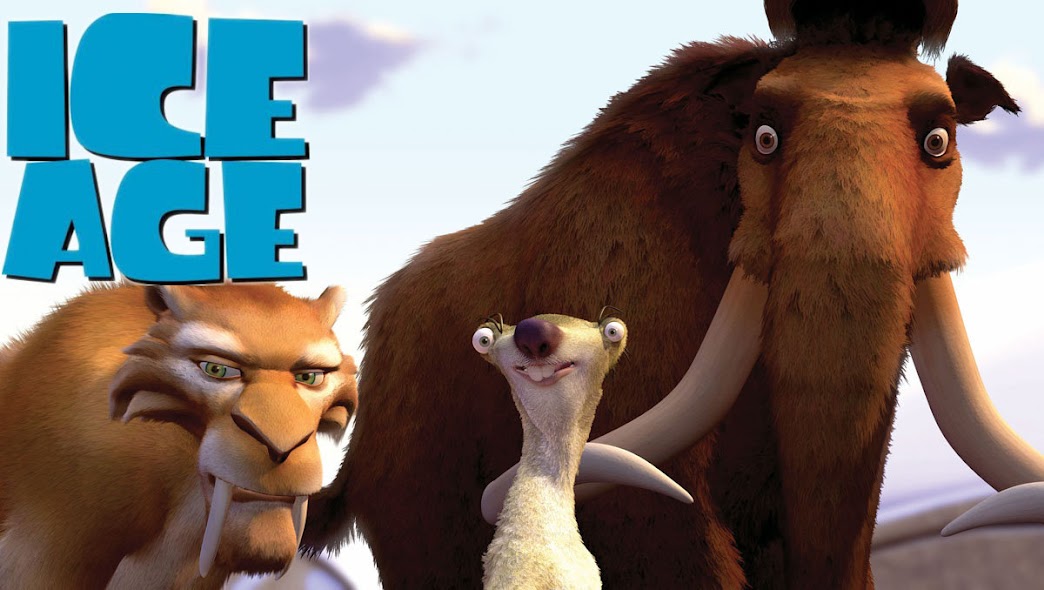 The greed of the Hollywood system dictates that any idea that makes a ton of money must be endlessly remade under diminishing returns until everyone is thoroughly sick of the pale shadow left at the end. Yes I know there’s four movies, but I have to draw a line.

Despite the usually repellent trope of anthropomorphised talking animals, I have a lot of time for the original Ice Age, an animated Longest Journey quest undertaken by three unlikely sub-zero heroes. Manny the mammoth (the dry Ray Romano), Diego the sabre-tooth (sardonic Dennis Leary) and Sid the sloth (endearing, lisping klutz, John Leguizamo) deliver a witty, inventive script as they flee the advancing glaciers and impending extinction, attempt to return a human baby to its’ tribe and bond together as their own unique herd.

And as a sideshow, silent clown Scrat (a pre-historic squirrel-rat) replays Wiley Coyote chasing a prize acorn. It’s funny, touching, and a fine life-lessons fable to the under-tens. Until Ice Age 2 and 3 when it all goes horribly wrong…

In a terrible outbreak of Sequelitis, Ice Age 2 The Meltdown, well, melts down. In place of wit and invention, the noise level goes all the way to full, and the gentle quest of mild peril is turned into a tedious seen-it-all-before video game of climbing, falling, swooshing, whooshing and screaming.

There is one other mammoth left, a female called Ellie, who grew up thinking she’s a possum. Hilarious. Voiced by the over-exclamatory Big Mamma Queen Latifah. Even more hilarious. Either I’m too white and culturally divided to appreciate her particular acting talent – or there is none. You decide.

Anyhoo, this time the boys-in-the-herd have to rescue all the other animals from a thaw and flood of epic proportions. Manny has to man-up and romance the possum-mammoth. And we have to put up with the cute furry antics of Ellie’s possum brothers Crash and Eddie (Seann William Scott and Josh Peck), two daredevil pranksters and loud-mouthed troublemakers. And Scrat is written up to entirely superfluous full comic opera.

I know Ice age was never quite Watership Down, but please.

Then along comes Ice Age 3: Dawn of the Dinosaurs, when – surprise! – our heroes discover the dinosaurs aren’t extinct but live on in a Lost World paradise below the ice. Manny hatches three dino eggs, is swept up by the big lizard birth mother and the rest of the herd have to go on a dangerous quest to get him back.

Almost all the wit is gone (there are some good one-liners) in favour of a massive platform-game aesthetic, with everything cranked up to eleven, yet more climbing, falling, swooshing, whooshing and screaming.

But by far the most irritating thing in the whole movie is Simon Pegg. I know I should stand by the Brits and he’s made more money in Hollywood than I ever will, but: playing a cross between Ben Gunn and Johnny Depp’s Cap’n Jack Sparrow as a demented, buccaneering weasel called… Buck (see what they did, there) – it’s just desperately trying too hard.

Yes, I am a grumpy old curmudgeon. There is nothing bad about the Ice Ages in the same way as, say, American Pie or anything with Steven Segal. The animation is fantastic, the assembly is a technical tour de force; these are glossy, shiny, family-friendly movies that have gainfully employed a few thousand people between them. I shouldn’t complain. But I will.

What this does is make you glad for all those classic movies that stand alone without ever becoming ‘a franchise’ – in Hollywood-speak, a self-given licence to print money. It is the essential greed and cowardice of the studio system; find a hit, rinse, repeat.

That doesn’t mean making movies I want to watch. RC

Related: How to Train Your Dragon