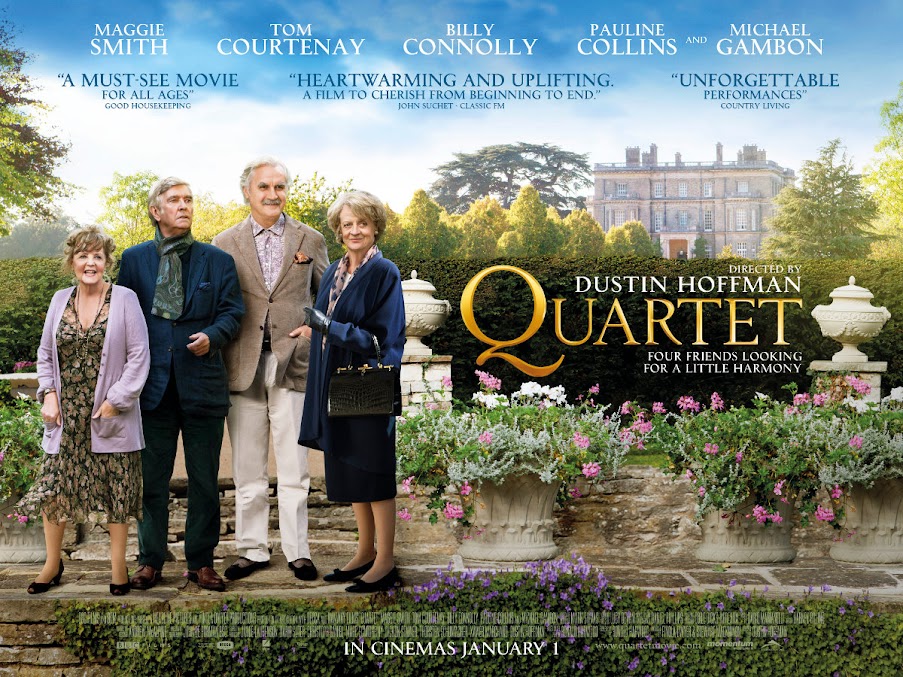 In an opulent stately home for retired musicians, Dustin Hoffman assembles a top notch cast of British veterans for his directorial début, a rose-tinted tale of regrets of former opera stars in their declining years.

Ignore the surface riffing on the indignities of old age, it’s High School Musical for the septuagenarians…

Touching as it is, this year’s Best Exotic Marigold Hotel has to go some to keep up, even after importing La Smith as the haughty grand opera dame.

The theatricality of Ronald Harwood’s own stage adaptation is not helped by the grand setting in which the supposed pauper pensioners live; Downton itself is put to shame with the luxury of the interiors and grounds.

As for the plot, it recycles every ‘let’s do the show right here’ musical from Garland and Rooney to Fame and The Muppets. After a bit of jostling, a few set-backs, a will-they, won’t they, a reversal and recovery, and the obligatory rehearsal montage, we arrive at the Gala performance. And what a performance it will have to be if the miniscule audience is to stump up the cash to save the multi-million budget manor.

Can the four thesps pull off the opera? Will Hoffman cop out and lip-synch their legendary Rigoletto quartet?

The four leads do an outstanding job, from Collins’ energetic early dementia, Smith’s high-strung recluse, to Connelly’s old rogue growing old disgracefully. But it is Courtenay’s quiet, heart-broken Reggie who steals every scene.

Ably supported by a campy Michael Gambon, an underused Sheridan Smith, Trevor Peacock as a variety-show muddler, also prepare to be amazed by the genuine retired players in the background cast, showing they’ve still got it after all these years.

Hoffman’s directing is assured and as a genre movie, holds together in time-honoured, predictable fashion. There are some fine scenes – Reggie contrasting opera and hip-hop with some street-wise school-kids just might get you to look at opera in a new way.

No car crashes, no shoot-outs, no blue-skinned lemur-people, just ignore the clichés, sit back and admire the performances. RC

Robin Catling gained degrees in both arts and technology which led to a diverse portfolio of employment. A freelance systems analyst, project manager and business change manager for the likes of American Express, British Airways and IBM, he moved on to web design, journalism and technical authoring. He has also worked in film and television, both behind and in front of the camera, including productions by Steven Spielberg, Martin Scorcese, Ron Howard and Ridley Scott. A qualified three-weapon coach, he runs West Devon Swords teaching sports fencing to all age groups, and in recent years qualified with the British Federation of Historical Swordplay to teach medieval and renaissance combat in the Historical Western Martial Arts.
View all posts by Robin Catling »
« Review: Ice Age Trilogy
News »