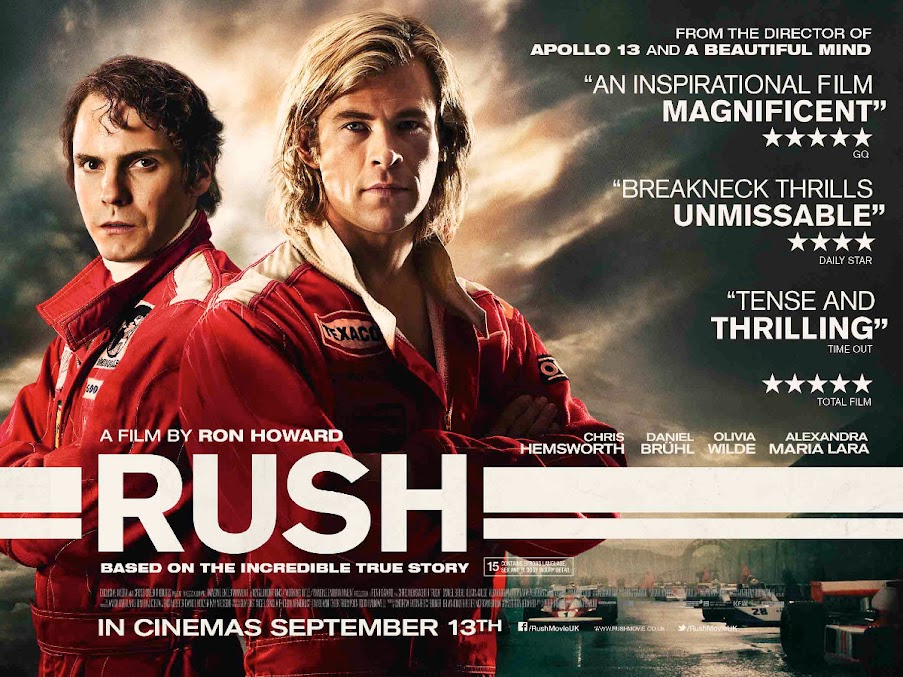 Although it suffers from many Ron Howard-isms – stodgy, stagey dialogue, too much ‘Basil Exposition’ and way too many clumsy captions guiding us through the 1970’s scene, Rush comes alive in the motor-races, where the noise, the cinematography and the editing puts you right there on the tarmac and tells you: this is insanely dangerous.

Packed with period detail, and accompanied, for once, by a Hans Zimmer score that hits just the right note of high drama – without fighting the glorious noise of engines – nevertheless you can’t claim Rush is a radically innovative movie.

But, who cares? Consummate professional Howard has put together a bio-pic of two men of a bygone era. And that’s worrying because that 1976 season was when F1 first caught my interest.

Shot with bravely period authenticity, in documentary style, and eschewing the glossy fakery of Stallone’s racing turkey Driven, Rush looks like a time capsule from 1976 in style and substance.

Switching between Hunt and Lauda’s personal stories, there are some good scenes for both of them, even though too much of Rush is gaffer-taped onto the body-shell with double voice-over. As a device, one voiceover is usually bad enough, but two indicates a serious lack of confidence in the aerodynamics of Peter Morgan’s (Frost/Nixon, The Queen) script.

You know that somewhere in there is a four-hour movie fighting to get out, and many of the clunky devices that get us from start line to chequered flag are there purely for narrative compression of six years rivalry between two men.

Of course, it’s a familiar story of petrol-and-oil characters; Hunt, the hedonistic, overgrown schoolboy and Lauda the introverted perfectionist. The two swap insults throughout the whole movie, even in their final ‘reconciliation’ scene, in an ending that is necessary but badly bolted onto the chassis.

It’s an ending that merely highlights how far the tale of two world champions swings toward Lauda. His narrative arc and character development are completed in his comeback from an horrific accident, whereas Hunt’s defining moment is surely in his retirement a mere couple of seasons later, when, somehow after this titanic struggle, “one world championship was enough.”

Supported by a cast of familiar Brits (Natalie Dormer, Stephen Mangan, Julian Rhind-Tutt, and yours truly lurking in the background) with Olivia Wilde (Cowboys and Aliens) and a restrained Christian McKay (Me and Orson Welles), Hemsworth does his masculine torso’d, blue-eyed thing but Brühl is sure to garner awards as the barely likeable ‘ratty’ Austrian.

Even if you know nothing about F1, or cars in general, strap in for the ride: this is insanely dangerous. RC

Robin Catling gained degrees in both arts and technology which led to a diverse portfolio of employment. A freelance systems analyst, project manager and business change manager for the likes of American Express, British Airways and IBM, he moved on to web design, journalism and technical authoring. He has also worked in film and television, both behind and in front of the camera, including productions by Steven Spielberg, Martin Scorcese, Ron Howard and Ridley Scott. A qualified three-weapon coach, he runs West Devon Swords teaching sports fencing to all age groups, and in recent years qualified with the British Federation of Historical Swordplay to teach medieval and renaissance combat in the Historical Western Martial Arts.
View all posts by Robin Catling »
« News
And We’re Back »