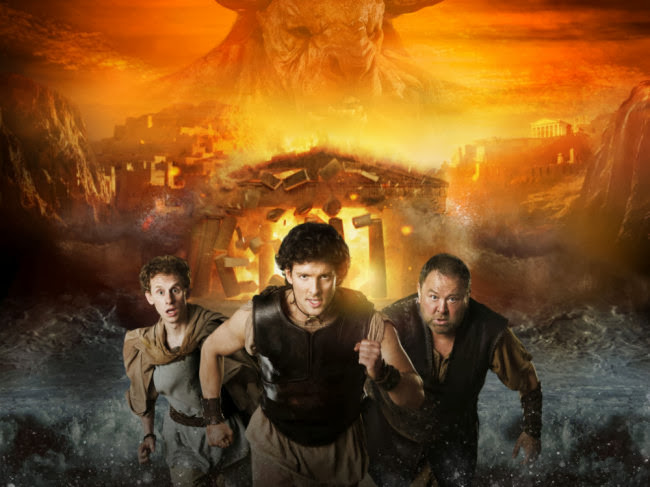 Forget everything you ever new about Greek mythology because, even more than Merlin, BBC Wales have picked up the deck, shuffled the cards, thrown half of them away and dealt the rest in whatever fashion seemed most convenient on a wet Thursday in Chepstow…

Jack Donelly is Jason (minus Argonauts), a British submariner with abandonment issues and a knack of getting his shirt off, who travels back to Atlantis via an undersea portal. Meeting Hercules, Pythagoras, King Minos, the Minotaur and the Oracle, all in episode one, no wonder the poor lad looks confused.

But so was I; wasn’t the minotaur’s labyrinth beneath Crete (and solved by some chap called Theseus), the Oracle’s sulphorous temple at Delphi and King Minos in Chersonissos?

I should have known better as soon as Jason washed up on the beach, walked into Atlantis, upset a two-headed lizard and ran the city guard ragged with some Prince of Persia leaping about. All within the first ten minutes.

Atlantis has some stunning CGI and some stunningly bad CGI. The dialogue is terrible, the acting ponderous and the plotting taken from some lowest-common denominator video-game adaptation. So, Prince of Persia, then.

Most of the cast make a good effort to deliver this tosh; Donelly’s earnest Jason, Robert Emms’ (uncannily like Ewan Bremner) Pythagoras, the triangle dude. Mark Addy (Game of Thrones) plays Hercules (shouldn’t that be Heracles in the Greek?) as a blustering Falstaffian coward. Alexander Siddig’s king (Star Trek DS9, Battlestar Galactica) is a devious politician, Sarah Parrish is the wicked step-mother to Aiysha Hart’s head-strong princess Ariadne, the only cast member who looks properly Greek and mythical.

And we keep cutting back to a struggling Juliet Stephenson as the Oracle muttering dark conspiracies.

There’s a marvellous Minotaur who gets wasted inside ten minutes (that was easy), but with so much to crammed in to episode one, everything gets compressed to thirty second sound bites for granny.

You can understand the BBC commissioning editors’ dilemma as to what the heck to broadcast when Doctor Who isn’t on, and Atlantis follows the tried and tested Saturday night family fantasy route paved by a wishy-washy Merlin and that ghastly Robin Hood. Atlantis is a mythical-fantastical-historical Pythagorean myth-math of both but with better weather. I suspect it’s only going to get sillier. RC

Related: Prince of Persia – The Sands of Time

Robin Catling gained degrees in both arts and technology which led to a diverse portfolio of employment. A freelance systems analyst, project manager and business change manager for the likes of American Express, British Airways and IBM, he moved on to web design, journalism and technical authoring. He has also worked in film and television, both behind and in front of the camera, including productions by Steven Spielberg, Martin Scorcese, Ron Howard and Ridley Scott. A qualified three-weapon coach, he runs West Devon Swords teaching sports fencing to all age groups, and in recent years qualified with the British Federation of Historical Swordplay to teach medieval and renaissance combat in the Historical Western Martial Arts.
View all posts by Robin Catling »
« News: Full Circle Magazine Issue 77 has Arrived
Movie Catch-Up: Thirteen Assassins (2010) »