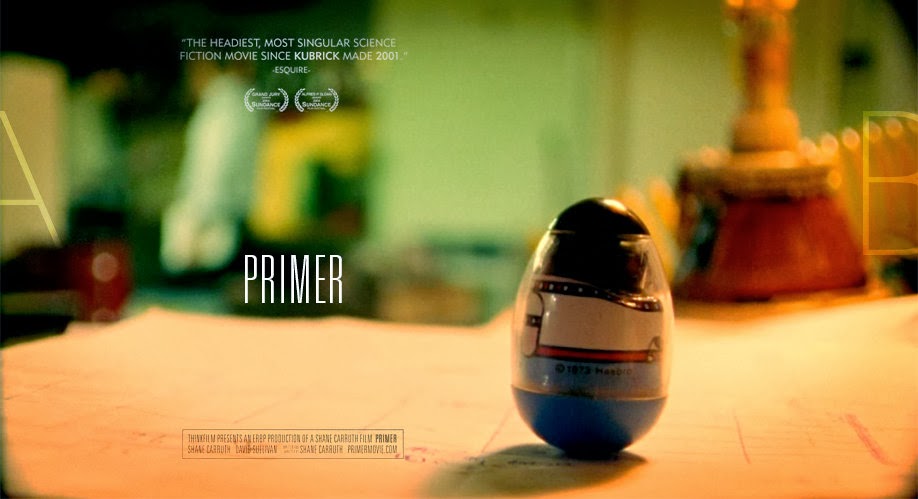 A tense, indie sci-fi movie made on a micro-budget that will leave you confused and with a headache.

Between mailing envelopes to potential investors, four engineers toil away in a garage, Apple or Hewlett Packard style to build a device that does… well, we never quite know. In and around the technobabble, they beg borrow and Heath-Robinson together a gizmo jerry-built from a catalytic converster from the family car, freon from the home refridgerator, bits of zinc plating and a couple of car batteries.

Don’t you know it, before long they’ve accidentally invented time travel. Like you do. And the dilemma from there is – can you change events? And if you can, should you?

Primer is the debut feature from film maker Shane Carruth, writer, directed, cameraman, editor, compser and star. Made on a micro budget, largely in his own garage and with family and friends recruited to act and crew the movie, Primer is a psychological sci-fi thriller, more concerned with the moral dilemmas of the two brightest of the would-be entrepreneurs. Which is just as well, for all the mumbo-jumbo about semi-conductors, the physics of the thing break down after twenty minutes.

Having discovered the ability to go back in time, hard working engineers and decent every-men Abe (David Sullivan) and Aaron (Carruth) deliberate for a while before caving in to a base desire to improve their lot financially, with a little insider share dealing care of a short time hop backward by a day. And again. And again. Which is where Carruth and we, the audience, rather lose the plot.

We’re not sure how often they time travel, but Abe soon gives in to a god-complex and decides to take care of the neighbourhood psycho, then has to deal with a breach of their secret by a prospective sponsor. From there, it all goes horribly wrong with multiple time paradoxes, causality loops and a complete breakdown of any narrative coherence. In which consequence of irresponsible time travel, is perfectly acceptable, if hard work for us watching.

Any respectable physicist will tell you that time travel backward is impossible, owing to the massive amounts of energy required – fortunately our heroes invent a self-sustaining reaction. Even if you could, you still need to travel in space else the Earth will continue in its’ orbit without you. Ignoring both of these obstacles, the boys manage to invent a portable time-travel capsule which is about as implausible as the magic Tesla box in The Prestige.

Fortunately Primer concentrates on the central relationship of Aaron and Abe, who start out as straight-laced corporate men and turn into conflicted time travellers; from best friends, the relationship slowly breaks down as Abe goes from quiet, scared family man to amoral action man whom Aaron can no longer stand to be around. Almost laughably geeky at the beginning in their uniform of white shirts and dark ties, time travel opens up like Alladin’s cave, frightening and alluring. You know when things get bad, because the ties come off.

Not only does the time travel make Abe and Aarons’ ears bleed, but ours as well. I have no idea how parts of the plot link together even now, but I’m not holding that against anyone. After the CGI excesses of Paycheck or Source Code, Primer is an honest little movie that only got made thanks to the dedication of Carruth and his crew. Highly stylised visuals and clever editing cover the lack of technical resource, although persistent evidence of the $7000 budget is the truly terrible sound recording quality for most of the movie.

Primer premiered at the 2004 Sundance Film Festival, where it won the coveted Grand Jury Prize for dramatic film. I can see why. Michael Bay, please take note. RC

Robin Catling gained degrees in both arts and technology which led to a diverse portfolio of employment. A freelance systems analyst, project manager and business change manager for the likes of American Express, British Airways and IBM, he moved on to web design, journalism and technical authoring. He has also worked in film and television, both behind and in front of the camera, including productions by Steven Spielberg, Martin Scorcese, Ron Howard and Ridley Scott. A qualified three-weapon coach, he runs West Devon Swords teaching sports fencing to all age groups, and in recent years qualified with the British Federation of Historical Swordplay to teach medieval and renaissance combat in the Historical Western Martial Arts.
View all posts by Robin Catling »
« News: Booker Prize Fiction at its Finest [Guest Post]
Review: Apple iPad Mini »