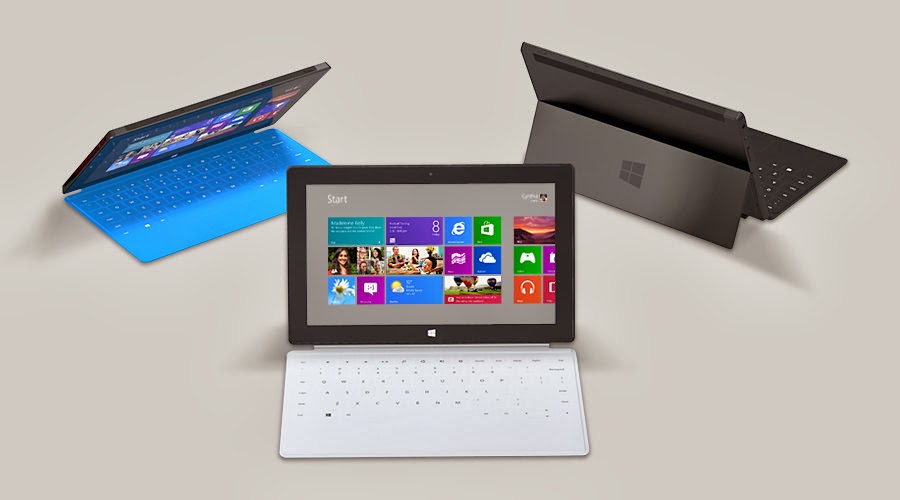 Remember the first Surface RT a few months back: ads full of clicky covers and no description of what the heck it was? For $500? Now with a prices cut of $150 down to $350, this may be worth another look – but take note – this is NOT the Surface 2 running Windows 8.1. Confused? Join the club…

The Surface has a unique 10.6inch screen running at 1366×768 pixels, in between the average 10inch tablet but smaller than 11.6inch laptops. With a Quad-core Nvidia Tegra 3, 2GB RAM and 32GB storage, the hardware is generally admired – which is just as well since there’s a lack of apps and the RT software’s not robust. Added to that, both cameras – front and rear – are only 1.2 mega pixel.
On the plus side the battery is rated at  31.5Wh giving around 8 hours of use, depending on how you hammer it.

The Surface RT has a certain style (not usually a Microsoft characteristic) with striking colours a sturdy VaporMG casing and a unique kickstand. It’s also the only tablet we’ve looked at with a full-size USB 2.0 port and an HDMI-out for those of us still stuck in 2006.

Now, back to all those clicky ads featuring the cover-stroke-keyboard. Get an RT with the bundled Black Touch Cover for $450; don’t go for the bundle and get the Touch Cover separately and that’s still $120. Which would be fine if the Touch Cover was any good as a keyboard. Yes, it’s thin and light, but doesn’t provide any tactile feedback.

Enter the more solid keyboard, the Type Cover: $130. No, makes no sense to me, either. Still, at $480 for a 32 GB Surface RT with Type Cover, this just stays below the $500 barrier when most 10-inch tablets sit without any kind of keyboard.

Something to note, while we’re quoting specs, is that you only get about 14 GB of free space out of that 32 GB Surface RT. That’s the Microsoft Windows stack for you. Also bear in mind that Windows RT is not an Intel build. There’s and RT version of Microsoft Office Home & Student bundled, including versions of Word, PowerPoint, Excel and OneNote optimised for touch, but you won’t be able to download many standard Windows 7 apps: no Chrome or iTunes here, you’re stuck with Modern (don’t say Metro) UI apps. There’s no Facebook app, so it’s not all bad (kidding). It also means your choices from the Windows Store are very limited.

The Surface RT is a thin, light device, you can create Word documents, and get on-line, but… it falls awkwardly between the stampeding herds of Android and iOS devices with all their apps. A relatively low price tag and that innovative keyboard/cover just can’t make up for that. Now the Intel-based, Windows 8.1 Surface 2 just might, but then we’re above the $500 price tag. AJS