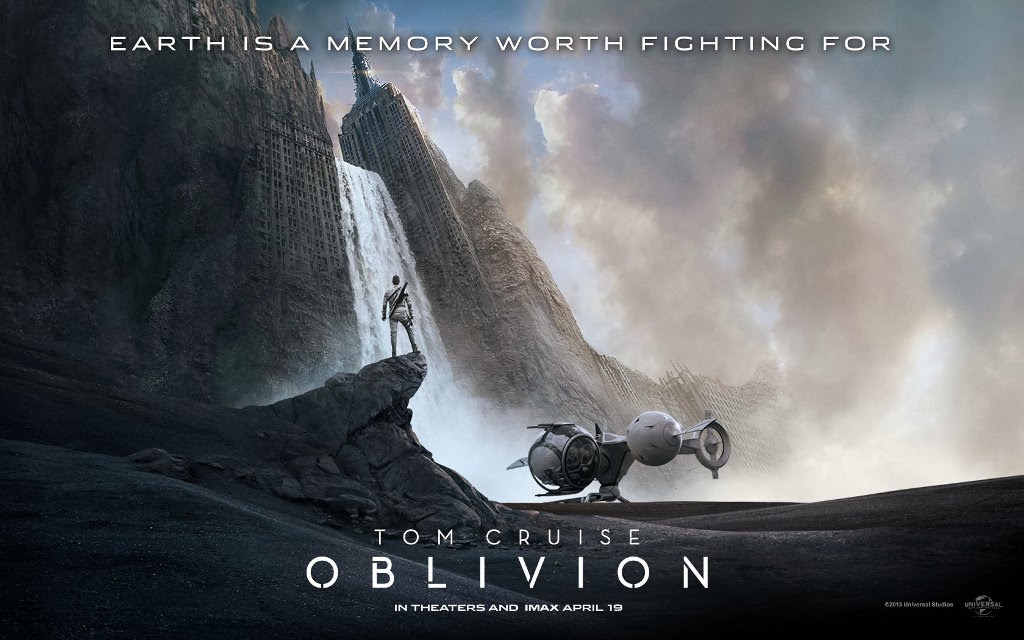 The planet is a post-nuclear, post-volcanic wasteland inhabited by Scav’s; humanity has fled leaving memory-wiped Jack Harper (Cruise – Mission Impossible) and partner Victoria (Andrea Riseborough) running the drones that keep the Scav’s away from the fusion generators draining Earth’s oceans. Cruise has memories of Earth before the war, and of a mystery woman, Olga Kurylenko (Quantum of Solace). And don’t you know it, she crash lands on his doorstep.

Technically flawless, Oblivion has some of the best visual effects anywhere, every CGI sequence is like a photorealistic cover of a classic sci-fi novel. And there’s a sweet love-story fighting to get out from beneath the the overload of grand sci-fi tropes. Just nobody mention Wall-E…

Cruise does his action man thing, and in between flying, leaping, shooting, getting variously battered about so his middle-aged features are less pretty than normal, delivers a top performance that reminds you he can act. The honours, though, go to Andrea Riseborough, cast for sheer brilliance in every shot – every shade of brittle insecurity, doubt, fear, jealousy, portrayed pitch-perfect without ever going over the top. The clash of styles would normally be catastrophic but is the one thing that plays well into this script.

Which leaves Kurylenko as Julia in a difficult place, permanently teary and with precious little to do but look pretty, her role is poorly served by the screenplay; she was stronger and had more to do in Quantum of Solace, and here is outclassed not only by Cruise and Riseborough, but by a restrained Morgan Freeman (Shawshank Redemption) and Nikolaj Coster-Waldau (Game of Thrones) who exudes menace in every shot.

So if those are the highlights, why am I not gilding the star-ratings? Well, there’s an opening three minutes of Basil Exposition voice-over from Cruise while we admire the production design and the CGI laid over Icelandic locations. A big chunk of voiceover always tells you the script has gone wrong and immediately sets any hardcore sci-fi fan in mind of the original cut of Blade Runner. From there, you’re ticking off a host of other movies (not all of them good) – Mad Max, Screamers, Moon, Minority Report, Total Recall, 2001, Space Hunter*, Independence Day, and various  remakes of Twilight Zone classics.

Jack sits in the wasteland watering a little potted plant, and once we get to Jack’s little bit of Earthly paradise, with his vinyl record collection and NYC baseball cap, you know we’re not going for subtle. You know full well the number of loopholes in the set-up; nothing will turn out to be as it seems and if you’re half-awake you can spot each revelation and the denouement from about five minutes in. Which leaves precious little of the plot to spoil. So if there’s nothing original here, you might as well admire the style with which Oblivion pulls it off. It is a visual treat. RC

Robin Catling gained degrees in both arts and technology which led to a diverse portfolio of employment. A freelance systems analyst, project manager and business change manager for the likes of American Express, British Airways and IBM, he moved on to web design, journalism and technical authoring. He has also worked in film and television, both behind and in front of the camera, including productions by Steven Spielberg, Martin Scorcese, Ron Howard and Ridley Scott. A qualified three-weapon coach, he runs West Devon Swords teaching sports fencing to all age groups, and in recent years qualified with the British Federation of Historical Swordplay to teach medieval and renaissance combat in the Historical Western Martial Arts.
View all posts by Robin Catling »
« News
Opinion: Windows XP – Not Dead By a Long Way »