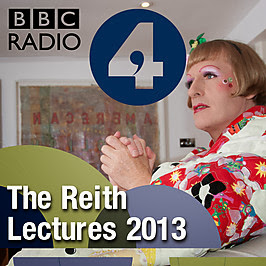 The award-winning artist Grayson Perry presents the 2013 BBC Reith Lectures, titled Playing to the Gallery. Across four programmes he discusses what makes him an artist, the limits of contemporary art, how to gauge the quality of new artworks and the future of the avant-garde.

The long-running and incredibly worthy annual lecture series on the media, broadcasting and the arts gets a hugely entertaining shot in the arm from the still subversive and playful Grayson Perry.

Turner-winning ceramicist and noted cross-dresser Perry scrutinises the art world with candour and good humour, and still manages to inspire from beneath a cloak of cynicism…

From the post-post-modern and the long legacy of Marcel Duschamp’s statement that anything can be art (maybe, but not necessarily good art, says our host), Perry takes us through a deconstruction of art, the artist, the commercial art world and why art matters over the course of four lectures.

Be sure not to miss the most intelligent Q&A at the end of each. All are available as podcasts from the BBC website indefinitely. Go listen now. RC

Grayson Perry: Democracy Has Bad Taste 15 Oct 2013 Duration: 43 mins
In his first Reith Lecture the British artist Grayson Perry explains the process of assessing quality in contemporary art. Recorded in front of an audience at Tate Modern in London, Perry argues that there is no empirical way to judge quality in art. Instead the validation of quality rests in the hands of a tight knit group of people at the heart of the art world including curators, dealers, collectors and critics who decide in the end what ends up in galleries and museums. Often the last to have a say is the general public.

Grayson Perry: Beating the Bounds 22 Oct 2013 Duration: 42 mins
Can anything be considered as art? Grayson Perry questions the often-heard assertion in his second Reith Lecture, recorded at St. George’s Hall in Liverpool.

Grayson Perry: Nice Rebellion, Welcome In! 29 Oct 2013 Duration: 42 mins
Can art still shock us or have we seen it all before? Speaking to an audience at The Guildhall in Londonderry, the artist Grayson Perry asks if revolution is a defining idea in art, or has it met its end?

Grayson Perry: I Found Myself In The Art World 5 Nov 2013 Duration: 42 mins
4/4. Grayson Perry discusses his life in the art world and assesses the role of the artist in society.

Robin Catling gained degrees in both arts and technology which led to a diverse portfolio of employment. A freelance systems analyst, project manager and business change manager for the likes of American Express, British Airways and IBM, he moved on to web design, journalism and technical authoring. He has also worked in film and television, both behind and in front of the camera, including productions by Steven Spielberg, Martin Scorcese, Ron Howard and Ridley Scott. A qualified three-weapon coach, he runs West Devon Swords teaching sports fencing to all age groups, and in recent years qualified with the British Federation of Historical Swordplay to teach medieval and renaissance combat in the Historical Western Martial Arts.
View all posts by Robin Catling »
« How-to: Hashtags [Guest Post]
Review: Diana (2013) »