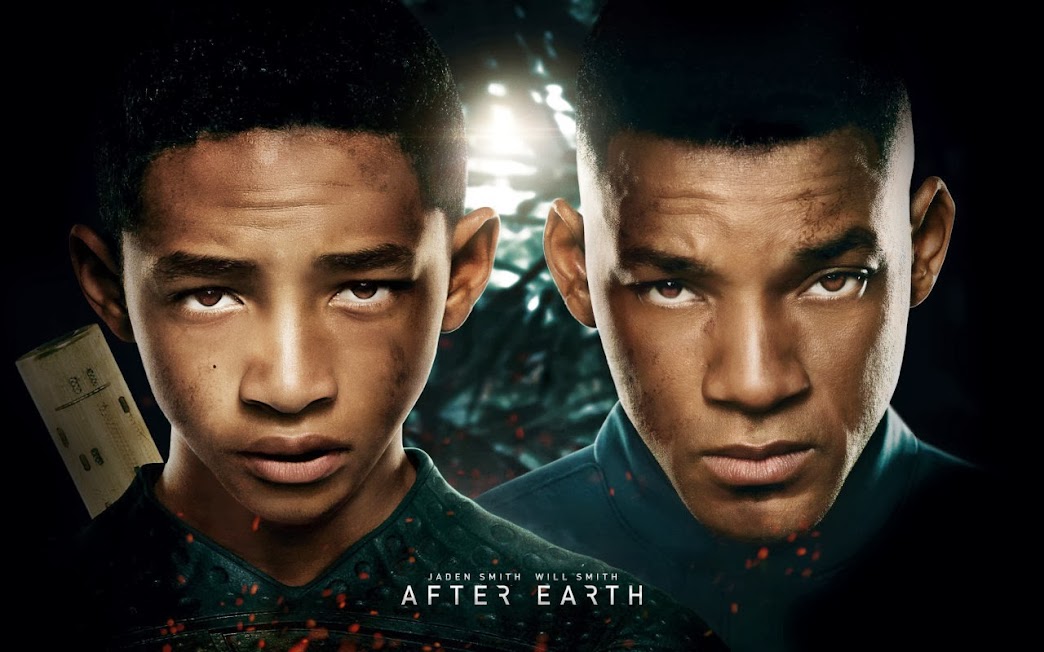 With this little subtlety, you know something’s wrong when Smith Snr. is a character called Cypher Raige and Smith Jnr. sees dead people…

It’s another extraordinary visual treat wrapped around a formulaic and derivative script; one with so many rules and McGuffins – the ship-wreck, the distress beacon in the lost tail section, the overnight freeze, and all the creatures “evolved to kill humans.” Hang on, humans haven’t been there for a thousand years and evolution takes longer than that anyway. And the Earth is such a lush paradise again, why hasn’t it been recolonised?

Also add one Grendell-like giant bug, the Ursa, which the Earthmen foolishly brought with them.

If you were expecting another I am Legend from Will Smith, the good (or bad) news is, this isn’t it. Will does his best so be serious, stoic and grown up as the legendary ‘ghost’ ranger without fear, who defeated the aliens last time around. But given he is injured in the ship wreck and lies there most of the movie like a sci-fi Ivanhoe unable to move, he has to do most of his acting from a chair. On the surface a rigid, solemn and frankly boring character, there is enough depth in Will’s performance to get across the concerns and regrets of the absent family man.

Whilst we’re being fair, Jaden Smith (The Karate Kid, The Pursuit of Happyness) turns in a great performance as young Kitai. So irritating at the beginning, we find out he has survivor guilt – the Ursa’s killed his sister in front of him. He is the child in peril who has to undertake the dangerous journey and learn how to ‘ghost’ like his father; cover his fear in order to avoid detection by the alien.

But above all this is a life-lessons movie: “danger is real, but fear is a choice.” Fear is the mind-killer, embrace your destiny, must you… sorry, I wandered into the wrong movie for a moment, but you get my drift. Kitai gets all Samurai-serious for the finale, and that’s that; job done.

Based on a story by Smith, from a magazine piece about a father and son surviving a plane crash, Shyamalan is the hired writer (with Gary Whitta, a video-game journalist and consultant) and director, recovering from the critical misfires of The Village, Lady in the Water, The Happening and the disastrous The Last Airbender.

After Earth goes about it’s business with serious intent, the most expensive Aesop fable ever screened. Enjoyable, overloaded as it is with layers of guilt, regret and family therapy, you might choose to enjoy it simply for the adventure, in which case, it’s nowhere near as bad as the critics say it is. What do they know? RC

Robin Catling gained degrees in both arts and technology which led to a diverse portfolio of employment. A freelance systems analyst, project manager and business change manager for the likes of American Express, British Airways and IBM, he moved on to web design, journalism and technical authoring. He has also worked in film and television, both behind and in front of the camera, including productions by Steven Spielberg, Martin Scorcese, Ron Howard and Ridley Scott. A qualified three-weapon coach, he runs West Devon Swords teaching sports fencing to all age groups, and in recent years qualified with the British Federation of Historical Swordplay to teach medieval and renaissance combat in the Historical Western Martial Arts.
View all posts by Robin Catling »
« Review: Kelly Clarkson – Wrapped in Red
News 22 Nov 2013 »