Review: Day of the Doctor 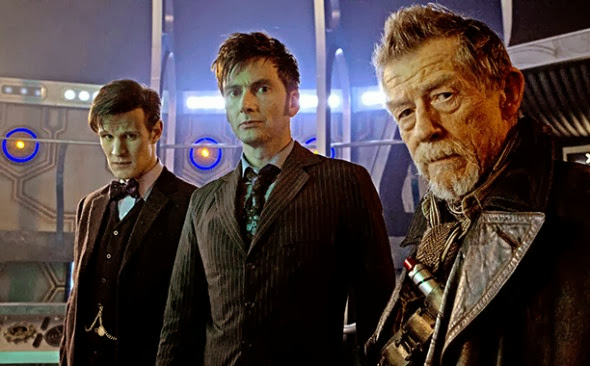 After a fortnight of saturation coverage on every BBC channel, the plot made no sense and despite show-runner and writer Steven Moffat’s oft-quoted dislike of plots that are too ‘timey-wimey’, the 50th Anniversary secial was a bit… ‘timey-wimey.’

With Tennant and Smith sliding into self-parody, gravelly John Hurt, as the ‘missing’ Doctor (more like the Old Man of the Sea), acted everyone else off the screen, while Billy Piper popped up as the embodiment of sentient Ultimate Weapon (a true blonde bomshell?) to save the day.

After nine years of hints at the Fall of Arcadia and the end of the Time War, a dizzying construction of time-rifts, wormholes, time-locks and downright whatever-cheats-Moffat-needs-to-get-to-the-end made Day of the Doctor pretty well unintelligible to even the die-hard fans. For example, a second Zygon invasion of Earth that would have been the main plot in any other week was shoe-horned into an irrelevant sub-plot whose main purpose was to get three Doctors into a prison cell long enough for a 400-year-long therapy session.

True to form Moffat delivered some sparkling gags and in-jokes but they hardly made up for the staggeringly long and portentous periods of introspection as prophet-of-doom Hurt contemplated the genocide of both Daleks and Time Lords in a Terminator Judgement Day final assault on Gallifrey. “Did you ever count how many children there were on Gallifrey that day?” Chilling. Not subtle, but chilling.

Moffat’s missing Doctor was inserted into the canon as the man who stops the war with a very final solution and up pops Piper as the disembodied concience of the weapon of mass destruction that definitely doesn’t want to explode (Dark Star fans chuckle here).

Puzzled at the clownish antics of successors Tennant and Smith, Piper’s blonde bombshell has to explain, “they’re what you become if you destroy Gallifrey. The man who regrets. The man who forgets. The moment is coming. You have to decide.” Told you it was portentous.

Day of the Doctor featured the usual silliness of ultimate weapons, bad 3-D paintings, Black Archives, London landmarks (the Tower and National Gallery), a bit of Kate Stewart at UNIT, and Matt Smith dangling from the TARDIS suspended by helicopter. And a woefully badly written Elizabeth I delivered by an embarrassing (and Welsh) Joanna Page.

So amongst some shape-shifting Zygons, a bit of the usual running about, product-placement of three sonic screwdrivers and a completely nonsensical cameo by Tom Baker’s Curator, Hurt, Smith and Tennant got to destroy Gallifrey and then save it (we think). Cue next season’s quest to find wherever is they put it.

And despite a tacky and equally nonsensical CGI line-up of all the Doctors, we finish exactly where Dr Who began in 1963; a quintessentially British bit of hokey-sci-fi big on ideas, wobbly on execution but looking at the viewing figures, it seems that’s exactly what we all wanted. RC

Robin Catling gained degrees in both arts and technology which led to a diverse portfolio of employment. A freelance systems analyst, project manager and business change manager for the likes of American Express, British Airways and IBM, he moved on to web design, journalism and technical authoring. He has also worked in film and television, both behind and in front of the camera, including productions by Steven Spielberg, Martin Scorcese, Ron Howard and Ridley Scott. A qualified three-weapon coach, he runs West Devon Swords teaching sports fencing to all age groups, and in recent years qualified with the British Federation of Historical Swordplay to teach medieval and renaissance combat in the Historical Western Martial Arts.
View all posts by Robin Catling »
« How-to: Top Public Speaking Tips
How-to: Googleability »

3 thoughts on “Review: Day of the Doctor”