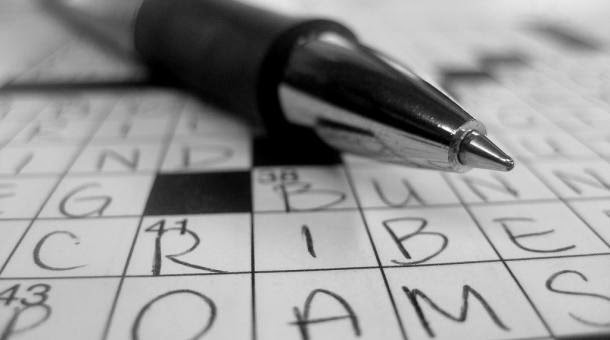 This month marks the centenary year of the crossword. From its modest beginnings in 1913, the crossword has become a worldwide phenomenon.

The invention of the crossword is credited to Arthur Wynne, an English journalist working for the New York World newspaper in the 1900s. Faced with the task of producing a new puzzle for the games section of the paper, Wynne fused together the principles of acrostic poems and word squares to create the ‘word cross’.

Unlike its crossword counterpart, a word cross was diamond-shaped, contained no black squares and used simple clues. By popular demand the word cross later returned as the crossword and over the following years was published in various American magazines and newspapers.

By 1924, two budding entrepreneurs – Dick Simon and Max Schuster – had taken advantage of this new ‘fad’ and published a book of crossword puzzles – the very first of its kind. Twelve months later, 400,000 copies had been sold and a worldwide craze formed.

Over the past century, the crossword has stamped its mark in the history books. In 1925, Buckingham Palace released an official statement pronouncing Queen Mary an enthusiast. Princess Margret may well have shared her Grandma’s enthusiasm, leading her to victory in Good Housekeeping’s crossword competition.

The mystique of the cryptic was too much for some however. Following the run-up to the D-Day landing in 1944, The Daily Telegraph was accused of being involved in espionage; nearly a dozen codewords appeared in several of their crosswords. Although this was nothing more than a coincidence, it was chief crossword-setter, Leonard Dawe, who had the unlucky task of explaining this to the MI5.

For others, the boundaries of the crossword are limitless. In 2008, Ara Hovhannisanm published the largest crossword containing a record breaking 12,842 clues across and 13,128 clues down. Take a look at other crossword records here.

Related: What’s the opposite of a one-hit wonder? [Guest Post]