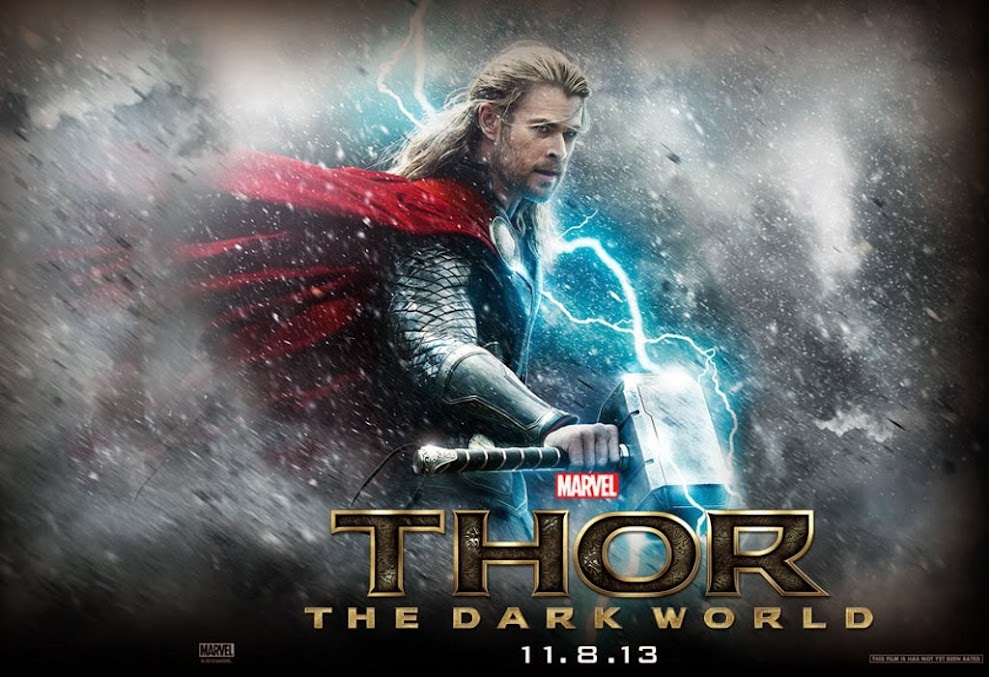 Post-Avengers, Thor steps up a gear to play a blinding tour de force in a packed comic-book fantasy with lashings of sci-fi – and a video game aesthetic.

From the opening Lord of the Rings battle sequence through to the slightly-cheaper-than-New York ‘let’s demolish Greenwich’ finale, The Dark World is a ‘visual treat’ (copyright: Us, 2013).

And although ‘visual treat’ usually means gasp at the CGI and never mind the script, it’s a script you can live with to enjoy Tom Hiddleston (Thor, Warhorse and Chris Eccelstone’s (Dr Who, Heroes, GI Joe) complex villains. Even Chris Hemsworth’s Thor has grown up a bit more serious in between the derring-do.

Alan Taylor, fresh from Game of Thrones, makes the step up from TV to full blockbuster status and does a workmanlike job of directing, although you wish there was a bit more ‘zing’ the likes of Ken Branagh (Thor, Frankenstein) or Joss Wheedon (Avengers Assemble, Serenity) might bring to it.

The Dark World rattles along, competing for the title of darkest, broodiest movie of the season with Star Trek: Into Wobbliness. It’s clearly stepped off the Asgardian fence of the first Thor, this time we’ve full scale spaceships versus flying longships in dog fights, lasers versus broadswords in the hand-to-hand with the scary blank-faced dark elf storm-troopers. If only it didn’t look so much like a computer game…

Central to the movie are the relationships among the mortals and immortals. Sir Anthony Hopkins, looking majestic but frail as Odin, exchanges weighty word-jousts with his sons; and this time, one of my favourite redheads, Renee Russo as matriarch Friga, gets to show some guts and superpowers during the invasion of Asgard by the Dark Elves.

Natalie Portman remains miscast and light-weight as an astrophysicist, despite coming up with the break-through bit of comic-book pseudo-science mumbo-jumbo for the finale. She has a promising bit of rom-com business with the Thunder God, but this fizzles out as she runs about pretty insubstantially for the rest of the movie.

And it needs a strong cast to resist being crushed by all the gee-whizz CGI. Asgard is splendidly rendered as a metroplitan Rivendell, we have lasers, light-swords, cloaked ships, indestructible berserker dark elves modelled in minute detail in the style of White Dwarf cover art; force-fields, blighted worlds of ash and crashed spaceships – and this years’ Mass Effect CGI moment, the dark elves implosion grenades. One of those going off near you will seriously spoil your day.

And yet, it’s all a bit unbalanced. You long for the return of Hiddlestone and Ecclestone whenever they’re off-screen, their very different qualities of malice and malevolence defining the centre of gravity of the whole piece. It’s something Hemsworth just doesn’t have the class or the material to match. As ever, the villains are just that much more interesting.

Things aren’t leavened by much in the way of humour either. Leaving aside the public transit screw up (Charing Cross is not three stops from Greenwich, I know, I filmed another movie there), the London Underground scene is a decent gag. The God of Thunder forced to use the subway; priceless. Unfortunately the side-kicks’ mugging and slapstick is all a bit limp. And Chris Ecclestone doesn’t do humour.

Despite my reservations – and in the interests of full disclosure, I appear in this movie, cavorting in the halls of Asgard – my young lady loved it. Lord of the Rings and Star Wars (Phantom-Sith era) fan that she is, she immediately wanted to see it again. So we will. RC

Robin Catling gained degrees in both arts and technology which led to a diverse portfolio of employment. A freelance systems analyst, project manager and business change manager for the likes of American Express, British Airways and IBM, he moved on to web design, journalism and technical authoring. He has also worked in film and television, both behind and in front of the camera, including productions by Steven Spielberg, Martin Scorcese, Ron Howard and Ridley Scott. A qualified three-weapon coach, he runs West Devon Swords teaching sports fencing to all age groups, and in recent years qualified with the British Federation of Historical Swordplay to teach medieval and renaissance combat in the Historical Western Martial Arts.
View all posts by Robin Catling »
« Crosswords Made Simple [Guest Post]
Best Wishes for the Festive Season »