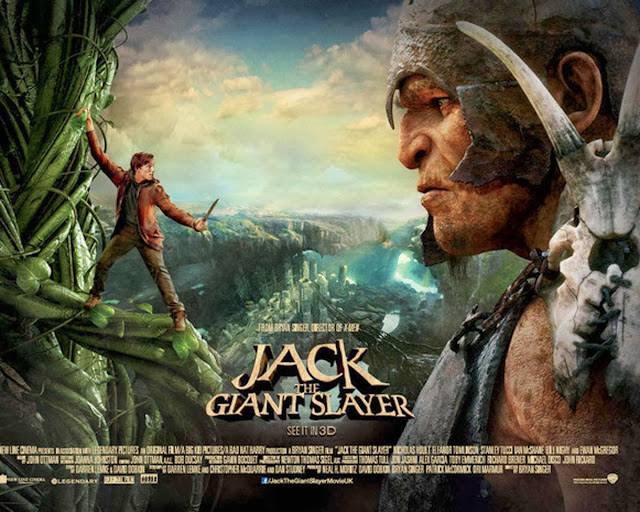 JtGS is the mash-up of the English fairytales Jack the Giant Killer and Jack and the Beanstalk, the latter better known to British audiences as a rather silly pantomime. It’s a thrilling re-invention of both. Oh no it isn’t!

While Giant Killer is a cult cheap British 50’s stop-motion fantasy and Beanstalk is unspeakably twee and camp, Singer brings a refreshingly honest reworking of the material for a family audience.

It rattles along at speed with hastily sketched characters, keen to get to the adventure… if you survive the prologue, an overblown mythos about a war with giants, magic beans, magic crowns, beanstalks, kings and castles. In a script that tries to weave the children’s story telling element in from the start, just in case we don’t get it, the story telling is both broad brush and oddly ponderous..

Then we get gangly, hoodie-wearing Nicholas Hoult’s (About a Boy, X-Men First Class) Jack taking the cart horse to market where a dodgy monk swaps the horse for magic beans. And we all know where that leads…

Yes, to Eleanor Tomlinson’s rather starchy princess Isabelle being swept up into the land of the giants, entwined in the beanstalk.

Despite the writing talent on board (not least Lemke and McQuarrie) the dialogue is all rather cod-Rank studios, delivered by all in a slightly fey, Monty Python Holy Grail fashion.

And if our two leads are too pretty and lightweight to cope with it, the rest of the cast get our their broadest brushes to paint some very thin material.

Among the supporting cast, Ewan McGregor (who may take up acting again one day) is a jolly, stiff-upper-lip English twit from a 1930’s adventure comic. Stanley Tucci is principal villain Roderick, making the best of an out-and-out Bond villain; Ewan Bremner his oily sidekick Wicke, Eddie Marsan is a no-nonsense bluff sergeant at arms. Ian McShane plays it straight as a tough old king.

All of which would be fine if the main draw, the giants, were up to snuff. Unfortunately, the CGI rendering is somehow a bit 1998; the giants have a bit more weight but no texture, they all look like cartoons. Bill Nighy does his best with an Irish accent as the giants’ chieftain, but mostly repeats his Davy Jones performance from Pirates, unseen benath the CGI.

If the giants resemble cartoons, then so does much of the Kingdom of Albion, an unreal pre-medieval kingdom that is a mashup of 50’s Hollywood Cinemascope classics and a large dose of Terry Gilliam whimsy. Add Ralph Browns’s superb, underused and oddly Prussian General Entin to be thoroughly confused.

After the nonsense of Van Helsing, the gloom of Snow White and the Huntsman, unrelieved moping of Snow White and the appallingly trashy Hansel and Gretel, perhaps Singer struck the right note (although we haven’t forgiven Superman Returns). Certainly my young lady thought Jack was great fun.

The action set-pieces are technically good, there’s tension, some scary scenes, a bit of Lord of the Rings-ness – but oddly very few laughs. It also drags on a bit at nearly two hours.

Boisterous, colourful and huge in scope, is Jack the Giant Slayer the best fairytale adaptation so far? Oh yes it is… oh no it isn’t! RC

Robin Catling gained degrees in both arts and technology which led to a diverse portfolio of employment. A freelance systems analyst, project manager and business change manager for the likes of American Express, British Airways and IBM, he moved on to web design, journalism and technical authoring. He has also worked in film and television, both behind and in front of the camera, including productions by Steven Spielberg, Martin Scorcese, Ron Howard and Ridley Scott. A qualified three-weapon coach, he runs West Devon Swords teaching sports fencing to all age groups, and in recent years qualified with the British Federation of Historical Swordplay to teach medieval and renaissance combat in the Historical Western Martial Arts.
View all posts by Robin Catling »
« Best Wishes for the Festive Season
News: 1972 Look Ahead with ‘The Sketch’ »