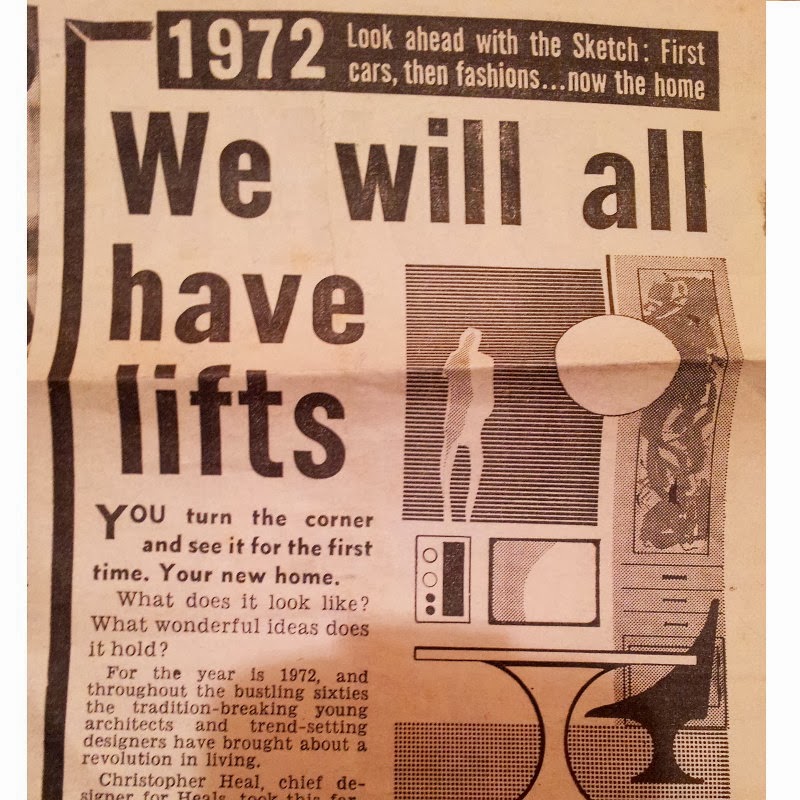 Our thanks to Brenda Beaumont for this press cutting from UK tabloid paper The Daily Sketch. This article, which, in the absence of a print date, we believe to originate between 1964 and 1969, is a perfect time-capsule of predictions from 60’s Britain, a far-off foreign land from today.

As usual with any kind of ‘futurology’ many innovations took far longer than predicted to enter the mainstream in conservative Britain; indeed, some are only just with us. Some of the new fads simply co-exist with the old ways; patio or garden? It’s your choice. Some haven’t made it yet, more than thirty years on; glasses-free 3-D cinema?

1972 Look Ahead with the Sketch: First Cars then fashions… now the home

We will all have lifts
You turn the corner and see it for the first time. Your new home.

What does it look like? What wonderful ideas does it hold?

For the year is 1972 the throughout the bustling sixties the tradition-breaking young architects and trend-setting designers have brought about a revolution in living.

Christopher heal, chief designer for Heals, took this far-sighted look into the seventies.

Houses will be more compact, he predicts. Basically they will have one large room divided by low partitions.

Underfloor heating will be IN. Fitted carpets will be OUT. Floors will be wood, stone or plastic. And following the trend set by Sir Winston Churchill, lifts will connect upstairs and downstairs.

Furniture will be designed to compete in the “save space” race.

Lamps out
“It will be built in,” says the Design Centre.

Cupboard space, drawer space, cocktail cabinets, radio, and TV sets will all be in the walls. Other furniture will be set back against them.

In fabrics: Terence Conran, managing director of Conran and Co., predicts a fabric lined room, with walls covered by tweed or hessian.

Heavy curtains will be OUT, blinds will be IN. Lamps and bulbs will be OUT. Invisible strip lighting will provide a soft, diffused glow. Windows – and doors – will slide open.

A small screen will show the arrival of visitors and the front door will open electronically.

Kitchen
Pots and pans may be out altogether with food to be cooked put straight on a hot-plate or poured into electrically heated containers.

“Appliances – washing machines, fridge and deep freeze – even the stove – will be set back into the walls, probably behind glass,” says George Feyer, a designer for De la Rue Plastics.

All surfaces will be metal or plastic. “The kitchen could be cleaned by hosepipe.”

Food – will come dried, frozen and shrunk in packets, and out of slot machines. White meat will be cheaper and red meat will be more expensive. Foreign foods, now considered exotic, will be taken for granted.

You will order yams and breadfruit with the oranges and lemons and plan a Chinese menu without a second thought.

Leisure
Leisure hours spent pottering about the garden will be OUT. High cost of land will lead to more patios – small walled and paved areas brightened with creepers and potted plants.

There you will sip the top drink of 1972. The increase in wine drinking in will have tailed off by then. Instead, South American drinks will be very much in.

Pleasure
Most cinemas will have a 3-D process where glasses are not needed. Science and space fiction will replace the Western.

The theatre? Just possible that The Mousetrap will no longer be running…

Robin Catling gained degrees in both arts and technology which led to a diverse portfolio of employment. A freelance systems analyst, project manager and business change manager for the likes of American Express, British Airways and IBM, he moved on to web design, journalism and technical authoring. He has also worked in film and television, both behind and in front of the camera, including productions by Steven Spielberg, Martin Scorcese, Ron Howard and Ridley Scott. A qualified three-weapon coach, he runs West Devon Swords teaching sports fencing to all age groups, and in recent years qualified with the British Federation of Historical Swordplay to teach medieval and renaissance combat in the Historical Western Martial Arts.
View all posts by Robin Catling »
« Review: Jack the Giant Slayer (2013)
Opinion: Application In Competancy [Guest Post] »