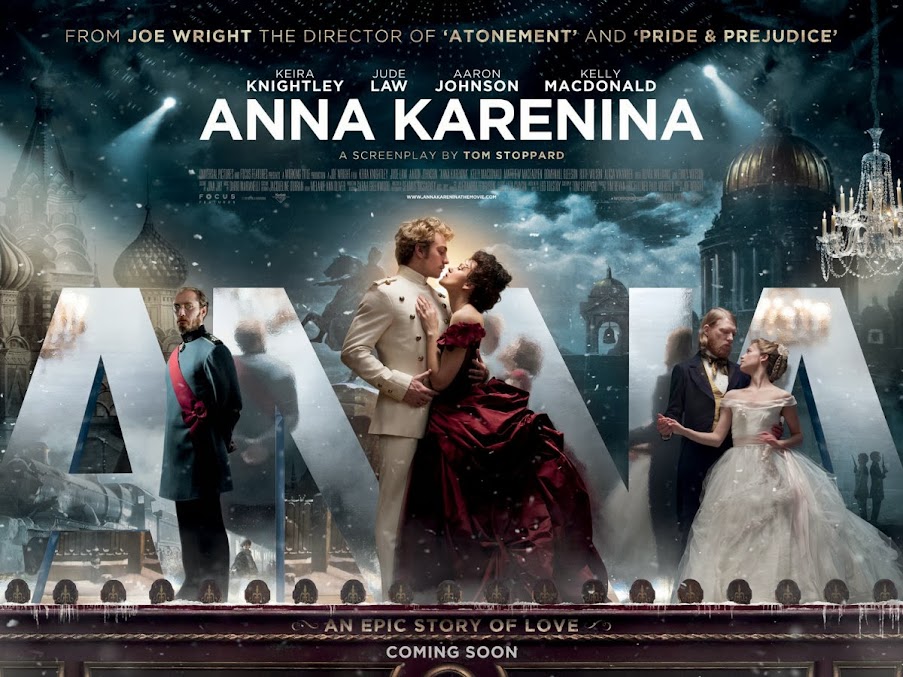 Succeeding where other adaptations fail, Joe Wright’s Anna Karenina takes the dull turgid Tolstoy out of Tolstoy and gives us a rollicking, passionate production in the style of Baz Luhrman’s Moulin Rouge.

In avoiding another stodgy costume procession, the endlessly inventive Tom Stoppard writes most of this Karenina as a theatre tragedy, balletically choreographed in opulent costumes, staged front- and back-stage of an 1870’s theatre. Tolstoy may have hated the theatre, but in Stoppard’s version it becomes the lens, the place where the glory and vanity and hypocrisy of the tsarist aristocracy are on full show.

In a dazzlingly stylised treatment of a studious novel, the theatre becomes council chamber, ballroom, racetrack and even, oh, opera house. The seduction of Anna by Vronsky – or is it the other way round – is immaculately staged in a grand ball, appropriately the dramatic high point.

It’s not new to see tales set in circuses and theatres; Attenborough’s Oh! What a Lovely War was set as an end-of-pier entertainment on the Brighton seafront. Like Liaisons, the theatre is a place of dramatic performance and moral judgement, of social censure.

Wright (Pride and Prejudice, Atonement) distils the scandalous tale of adultery amid the Russian aristocracy down to the Liaisons Dangerous of the Tsarist era. Losing much of the depth and social documentary of Tolstoy’s 950-page opus for two hour version that’s in constant motion, some call it lightweight, I call it a blessed relief.

At the centre of the top-notch cast, Kiera Knightley (Pride and Prejudice) is a worthy Anna, reluctant sinner, caught up in her passion with Aaron Taylor-Johnsons (Kick-Ass) magnetic, virile Vronsky; young, vain and glorious and ultimately a shallow mummy’s boy. For once, Knightley’s trademark twitches and gasps are restrained and put to use in all the right places. Knightley is a modern Garbo, mesmerising to look at even in her worst puppy-eyed, angsty moments. It’s not her fault you want to slap her and tell her to get a grip; any decent Karenina should do that.

Playing against type, Jude Law (Sherlock Holmes) is the wronged husband Karenin, rather more sympathetic than most, as the upstanding, conservative, pillar of society. And what a society; Olivia Williams (The Ghost) is the scandal-laden Countess Vronskaya, surrounded by Emily Watson, Ruth Wilson, Michelle Dockery, Holliday Grainger, Kara Delvingne, Kelly MacDonald and Shirley Henderson to name a few.

The normally stolid Matthew MacFadyen shows his rakish, animated side as Anna’s brother Oblonsky, while Domhnal Gleeson (Harry Potter) is Oblonksy’s friend Levin, the awkward, honest, idealistic landowner and man-of-the-soil who finally win his princess, a luminous Alicia Vikander. This pair, compassionate, faithful and kind, is juxtaposed with Anna and Vronsky, fiery, selfish and self-destructive.

The necessary compression of the plot brings Anna very quickly to her final encounter with a train, but no matter. Stoppard cuts the politics and social affairs, and settles for the examination of love in its many forms, the destructive romantic passion of Anna for Vronsky at the centre, leaving just enough Tolstoy detail to satisfy the purists.

If there is an issue, it is in the deliberate breaking of the fourth wall and the free wheeling tumble of genres, from source book to stage production to spinning movie camera. Scenes begin in the theatre building, on stage, or in a stripped out auditorium, then the action will open out into more normal sets and outdoor locations of a regular adaptation. While Wright creatively brings the indoors out and the outdoors in, many of the segues between scenes remind us of the artifice of cinema, breaking us out of the story and distracting from the excellent character work of the actors.

At times you’re wishing it was completely stylised or not at all, a total one-location movie, or a conventional one ranging as far as it needs.

But that’s not to say it’s a failure. I’m always prepared to give a bold re-imagining a chance and this has to be the best Karenina for me by far. Whilst my young lady is a huge fan of Pride and Prejudice and Atonement, she hates this. For me, it’s the other way around; Macfadyen killed the Austen and Atonement was far too chilly a piece. This Anna Karenina is Wright’s most engaging so far. RC

Robin Catling gained degrees in both arts and technology which led to a diverse portfolio of employment. A freelance systems analyst, project manager and business change manager for the likes of American Express, British Airways and IBM, he moved on to web design, journalism and technical authoring. He has also worked in film and television, both behind and in front of the camera, including productions by Steven Spielberg, Martin Scorcese, Ron Howard and Ridley Scott. A qualified three-weapon coach, he runs West Devon Swords teaching sports fencing to all age groups, and in recent years qualified with the British Federation of Historical Swordplay to teach medieval and renaissance combat in the Historical Western Martial Arts.
View all posts by Robin Catling »
« Opinion: Application In Competancy [Guest Post]
Happy New Year 2014 »