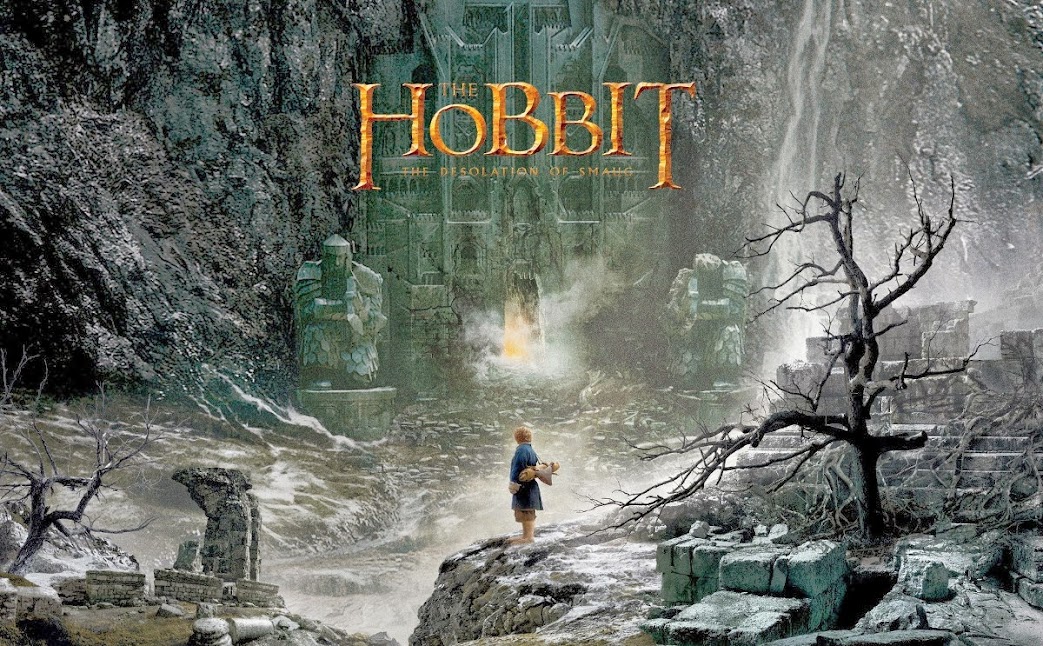 For the difficult middle of turnip-man* Peter Jackson’s vastly expanded trilogy of a very thin book, a violent, melodramatic CGI-laden adventure continues with too many dwarves and too much exposition.

Martin Freeman and Benedict Cumberbatch steal the show, whatever they’re in, as usual.

After a slow start with a load of talky-talky, the adventurers encounter giant spiders, Beorn the werebear (a comically hairy Mikael Persbrandt, reminding me of Carry On Screaming), get imprisoned in Mirkwood, are smuggled into Laketown and come at last to the Lonely Mountain and the lost halls of Erebor.

Orlando Bloom is back as action man Legolas, who barely looks like himself in this. His face has filled out in the intervening years since the LotR films, and he’s sporting a truly freaky pair of contact lenses; grumpily stomping about, a fatter, meaner Legolas than before, a smouldering peroxide psychopath.

Into the boy’s adventure steps Evangeline Lilly (Lost) as Tauriel, a redheaded wood-elf and obligatory kick-ass chick. Between them they shoot, stab, kick punch and behead (in spectacular style) an army of even more revolting orcs (possibly every stuntman in New Zealand). Yet Evangeline fails to convince as action woman.

The set-piece escape from Mirkwood becomes an interminable platform-game, a log-flume ride in barrels, pursued by the elves; a CGI-fest, where, in the print I saw, you can definitely see the joins when actors switch with their CGI replacements. With the running battle through Laketown, this is a brutally violent affair for a family movie, even if it is trademark Jackson.

Lee Pace is Thranduil, the decidedly sinister elven king of Mirkwood. Stephen Fry cameo’s as the vile Master of Laketown, doing that Stephen Fry thing. Luke Evans steps in as Bard the bowman and descendant of the defender of Dale. Unfathomably, he’s Welsh.

Tolkien completist Jackson pads out the narrative with Ian McKellen’s Gandalf off on his own adventure to meet an Old Enemy, here disguised as the Necromancer, again voiced by Cumberbatch.

As predicted, Jackson has to focus on fewer of the dwarves, the doughty Ken Stott, Richard Armitage glowering in rage as Thorin, and this time, Aidan Turner, who, even when shot, poisoned and four foot six, still manages to pull the birds.

Bilbo becomes the action hero, attacking giant spiders, masterminding the great escape and going to almost certain death to steal the Arkenstone from the dragon. Everything Freeman does lifts the movie; a look, a gesture, and the finest comedy walk as he descends to meet Smaug. I confess my argument against the overuse of CGI fails at the sight of the dragon, a glorious, expressive living creature.

In the two part finale, Freeman as Bilbo wakes the dragon voiced superbly by Cumberbatch (Sherlock, Star Trek into Darkness); arrogant, vain, greedy and terrifying. Their game of cat and mouse among Erebor’s treasure is the dramatic high-point, much like the Riddles in the Dark scene from the first movie.

For the final action set-piece, you feel Jackson could have scaled things up a bit, thought a bit bigger…

Of course, I’m kidding. Jackson bought a job lot from Gargantuan Maga-sets Inc: Erebor is so massive, at times, the characters disappear entirely among its’ pillars, bridges, enormous forges and cathedral spaces. It is a work of epic scale far beyond Tolkein’s little children’s book.

Dramatic though it is, there is little resolution at the end of this middle chapter. The setup is a double cliff-hanger for Bilbo and the dwarves and Gandalf, yet again captured by a more powerful wizard. Only another twelve months to wait… Of course we will. RC

Related: The Hobbit – An Unexpected Journey

Robin Catling gained degrees in both arts and technology which led to a diverse portfolio of employment. A freelance systems analyst, project manager and business change manager for the likes of American Express, British Airways and IBM, he moved on to web design, journalism and technical authoring. He has also worked in film and television, both behind and in front of the camera, including productions by Steven Spielberg, Martin Scorcese, Ron Howard and Ridley Scott. A qualified three-weapon coach, he runs West Devon Swords teaching sports fencing to all age groups, and in recent years qualified with the British Federation of Historical Swordplay to teach medieval and renaissance combat in the Historical Western Martial Arts.
View all posts by Robin Catling »
« Movie Catch-up: Abduction (2011)
Movie Catch-up: A Dangerous Method (2011) »