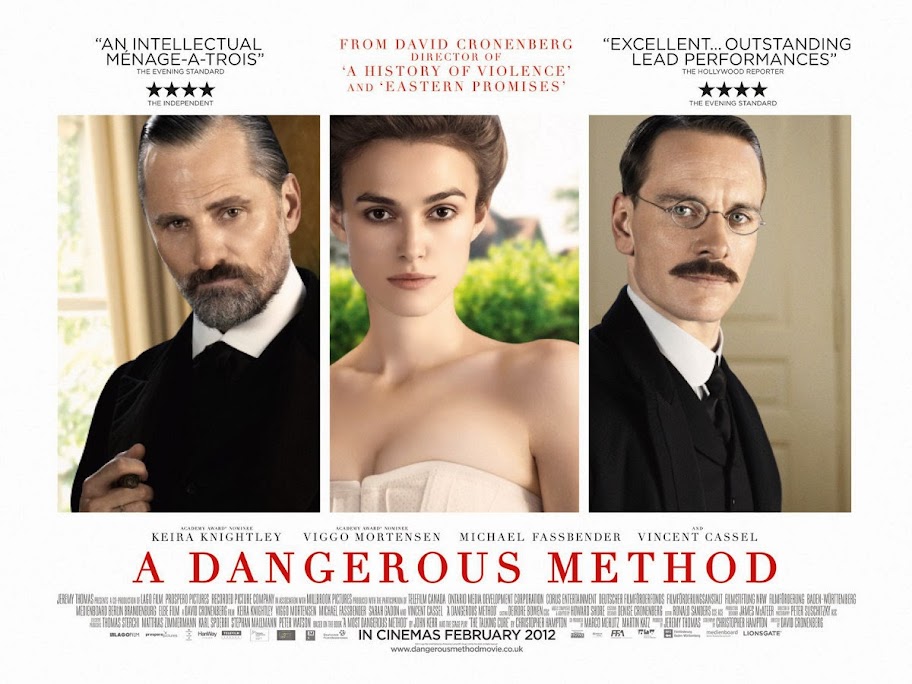 An oddly flat David Cronenberg adaptation recounts the early development of psycho analysis in a stagey adaptation of a stage play. Despite the beautiful exteriors of Swiss lakes, it remains a stage play with a camera pointed at it.

Viggo Mortenssen (Captain Alatriste, The Road) is oddly absent in his impersonation of Freud. Keira Knightley (Anna Karenina, Silk) gurns and twitches in an actressy version of mental illness, leaving it to Fassbender (Prometheus, Inglourious, Jane Eyre, Centurion) to steal the show again.

Cronenberg made his name with psychological and body horror (Shivers, The Fly, Crash, Dead Ringers). Now an elder statesman of film, this is a potted history of the men who developed the modern science (??) of psycho analysis. Central is the relationship and the falling out of Karl Jung (Fassbender) and the master, Sigmund Freud (Mortenssen).

It’s a talky picture and not in a good way. At its’ core, screenwriter Christopher Hampton (Dangerous Liaisons) adapts his National theatre play The Talking Cure, itself based on A Most Dangerous Method by the American clinical psychologist John Kerr.

Packing in too much Jungian-Freudian psycho-analytic theory, place-marking the early developments of the field, it is stagey and theatrical. A collection of vignettes that lurches from scene to scene, Cronenberg tries to make it bound along in his usual staccato rhythm (otherwise it would be Bergman) but structurally the script is weak.

If the intense dialogue scenes aren’t enough, you know a movie is in trouble when the principals resort to reading each other letters over shots of various dull domestic business. The period (1900’s through 1920’s) may be before the days of the telephone when correspondence was king, it does not make for exciting movies.

Initially, Jung is the paragon of the scientific method, but falls into temptation with an attractive patient (Knightley). Discontented with his pretty, rich and constantly pregnant wife (a dignified Sarah Gadon), Jung breaks all the rules, sleeping with his patient. A pioneer and fearless frontier psychiastrist yet a weak-willed man, Jung is painted a bourgeois hypocrite. Worst of all he is constantly agonising over his weaknesses, constantly self-analysing and doubting everything – even to criticising Freud’s mono-theory that every neurosis is rooted in sex.

Vincent Cassel (Black Swan) cameos briefly as proto-hippy, free-love exponent Otto Gross, just long enough to weaken Jung’s resolve to be professional and faithful to his wife. Jung has his affair with Sabine, breaks off, resumes, breaks off, lives off his wife’s fortune, argues with Freud and is somehow, for a psychiatrist, completely unaware of how his behaviour hurts those around him.

As a foil to Jung, Mortenssen is quite dull and passionless as Freud. The elder statesman role doesn’t suit him and there’s only so much that puffing on a cigar can cover. Knightley recovers well from her early caricature mugging as Sabine Spielrein, later a remarkable pyscho-analyst and student of Freud in her own right. However, in order to sell the movie, Knightley is never less than a vogue cover girl throughout, albeit with a smokey-eyed ‘madhouse-chic’ look in her asylum scenes. Fassbender plays the vacillating Jung with remarkable depth and charisma, making Jung both more and less interesting than he deserves. Always riveting, Fassbender’s underplaying actually wipes everyone else off the screen.

It’s difficult to judge how successful is Cronenberg in depicting these real historical figures, this is a fictionalised account after all. This is a clinically calm, restrained piece, a detached and passionless depiction from Cronenberg, that no amount of fetishised sex and spanking can warm up. RC

Robin Catling gained degrees in both arts and technology which led to a diverse portfolio of employment. A freelance systems analyst, project manager and business change manager for the likes of American Express, British Airways and IBM, he moved on to web design, journalism and technical authoring. He has also worked in film and television, both behind and in front of the camera, including productions by Steven Spielberg, Martin Scorcese, Ron Howard and Ridley Scott. A qualified three-weapon coach, he runs West Devon Swords teaching sports fencing to all age groups, and in recent years qualified with the British Federation of Historical Swordplay to teach medieval and renaissance combat in the Historical Western Martial Arts.
View all posts by Robin Catling »
« Review: The Hobbit – The Desolation of Smaug (2013)
How-to Decide What NOT to Post On Facebook Part I »