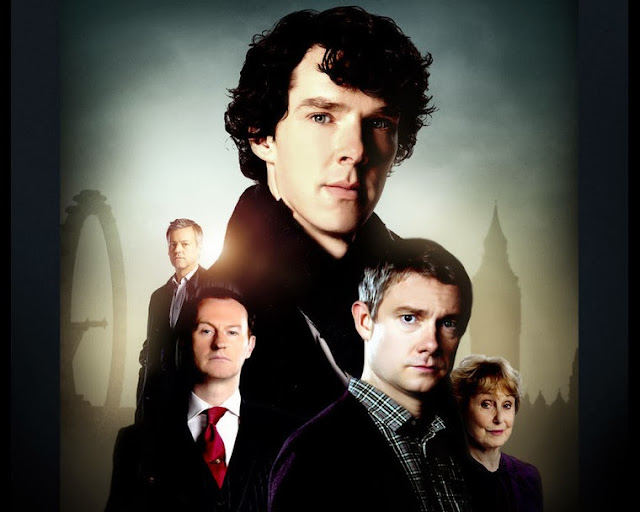 Through each of the knowingly post-modern, vain, smug, self-congratulating tangle of unsolved mysteries, plot holes through which you can pour the Reichenbach Falls, and style covering the lack of substance – and indeed plot – it remains brilliant.

As does the Freeman and Cumberbatch bromance, now complicated by the Watson wedding and the best Best Man’s wedding speech of all time.

So few episodes, yet so many questions. How did Sherlock fake a suicide swan-dive off Bart’s hospital (that’s not the spoiler); three possible explanations for that. And how did Moriarty fake blowing his brains out (that is a spoiler). No explanation for that. See Season Four. Most frustratingly, why is Moffat compelled to make Mary the least likely top international hit-woman (like you do)? Yes, that’s another spoiler.

And why have we not seen more of the mesmerising Lars Mikkelsen (Borgen, The Killing) outside of Scandinavia?

The Empty Hearse was all about the reaction to Holmes’ resurrection. There was no real plot, just that. There was a token terrorist bomb beneath Parliament, but it was only there to get Holmes and Watson to reconcile in a subway carriage.

The Sign of Three (the wedding) revealed Something About Mary, the excellent Amanda Abbington (Freeman’s real-life partner) acting brilliantly, but I’m still not convinced about the hit-woman thing. The highlight was that speech, tribute to the groom, unravelling of two attempted murders and the revelation of the emotionally dysfunctional Holmes growing up.

There were plenty of micro-performances from some of our best actors. Across three episodes, our mate Rupert Graves got little to do as Lestrade, new Sherlock fan Anderson (Jonathan Aris) got a full-on breakdown and Donovan (Vinette Robinson) got bumped comically with a car door. Una Stubbs was revealed as much more than the twee domestic Mrs Hudson in her backstory, while Yasmine Akram proved a worthy match for Sherlock as ‘girlfriend’ Janine.

Things must be improving as episodes roll on; I’ve warmed to Gatiss as sly spy-master Mycroft Holmes. Incidentally, check the veiled reference to the third Holmes brother – there’s a plot for Season Four.

This was a season of strengths turning to self-parody. Packed with Moffat moments of character and dialogue, oftentimes it’s an episode of Coupling, with Moffat’s trademark sharp sitcom gags of social awkwardness and inappropriate sharing. The Holmes monologues began to sound like Moffat’s Doctor Who. ‘Texting’ the interior monologues across the screen became unreliable false trails, while the astonishing, frenetic editing is both a triumph and a bear trap.

For episode three, His Last Vow, Moffat wrote Danish actor Lars Mikkelsen a master blackmailer in Charles Augustus Magnussen. Mikkelsen elevated the newspaper tycoon out of the merely slimy into a level of loathsome and repellent that Rupert Murdoch can only dream of; a mind so warped it bypassed serial killing and went into the media instead. A reptile who licked and finger-flicked his victims in horrible acts of domination, it was enough to make Murdoch a fluffy bunny and your average Bond villain (Jonathan Pryce, for example) look like a scout master.

Moffat delivered a Sherlock tour-de-force that makes you wonder where he can go next; Sherlock as a crack addict; Sherlock getting a girlfriend; Sherlock being shot and falling into a psychedelic near-death experience; Sherlock killing a man with full intent. And Moriarty.

Word to the wise. Never trust a wedding photographer.

This is truly the 21st century Holmes (sorry Johnny Lee Miller and Lucy, not even close). It’s not pure Conan Doyle, but it is pure gold. RC

Robin Catling gained degrees in both arts and technology which led to a diverse portfolio of employment. A freelance systems analyst, project manager and business change manager for the likes of American Express, British Airways and IBM, he moved on to web design, journalism and technical authoring. He has also worked in film and television, both behind and in front of the camera, including productions by Steven Spielberg, Martin Scorcese, Ron Howard and Ridley Scott. A qualified three-weapon coach, he runs West Devon Swords teaching sports fencing to all age groups, and in recent years qualified with the British Federation of Historical Swordplay to teach medieval and renaissance combat in the Historical Western Martial Arts.
View all posts by Robin Catling »
« News: Some XP Security Updates after April
Review: The Hobbit: The Desolation of Smaug (2013), Alternative Review »