Review: The Hobbit: The Desolation of Smaug (2013), Alternative Review 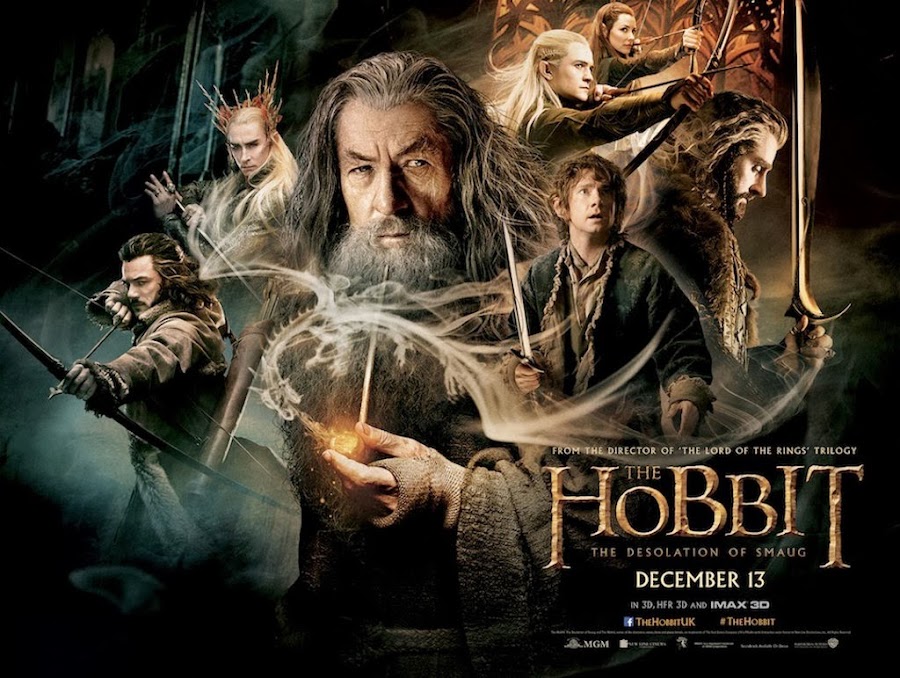 The classic three-act drama can be described as ‘get your hero up a tree, throw rocks at him, get him down again’. This is definitely act two, with an ominous ‘what have we done?’ at the bottom.

The nearest thing you’ll get to a “previously in The Hobbit” is a quick flashback on what it’s all about from before episode one, with the same grotty, muddy Bree pub that Aragorn will be found skulking in years later and a carrot-munching Peter Jackson cameo.

Then we’re plunged back in – this is a road-goes-ever-on movie, as Bilbo and the dwarves journey from one disaster to the next, meeting friends and foes along the way. Each new destination is superbly realised. The settings are glorious; the camera glides in dizzying sweeps through cavernous mountain interiors, and the elf king’s cathedral-like halls, all soaring trees and graceful masonry. And looking like it smells of bird poo and fish and presided over by Stephen Fry’s greasy, unpleasant chancer of a master, there’s something Ankh-Morporkian and Gormenghastly about the medieval Laketown, forever hemmed in by ice and mist.

The elves are back, as disdainful as ever, mostly modelling the patent elf glare – from the corner of the eyes, nose in the air, down at the riffraff. Highlights are Lee Pace’s vicious, sneering elf king, Lost star Evangeline Lilly’s lovelorn warrior Tauriel and the return of Legolas. Orlando Bloom is now a mature actor with more gravitas playing a younger version of his first role; yet it works. He’s a jealous, arrogant Legolas, taking what seems to be the first time he’s seen his own blood as a personal insult to be avenged.

And sex scenes in Tolkien? Who’d have thought they’d do a chaste yet steamy elf girl/dwarf prince encounter, all parted lips and sheen of sweat? They went there.

The dragon versus Bilbo sequence mirrors the Gollum encounter in part one, informed by J.R.R.T.’s own painting of the scene, the shadowy gold halls resembling a midnight wood, patterned with autumn leaves. Smaug the dragon himself is a glorious creation of ungainly elegance; Cumberbatch, THE VOICE, a honeyed, erudite rumble.

Talking of sound, it’s a Cinderella craft only really noticed when it’s poor, but here is sound at its best, full on and rich, the action scenes contrasting with the quietest and most delicate little sounds of breathing, the chink of metal, a faint echo in the caverns.

The action highlight is the full-on barrel ride down the rapids, chased by relentless orcs with the elves a balletic whirl of legs, hair and coat-tails picking them off one by one in impossible feats of grace and skill. Orcs, wargs and battling elves are CGI heavy – the match is usually seamless but sometimes you can just tell, the moves appearing too light and quick and as effortless as computer game graphics, which detaches the viewer from the characters and their peril. There are great live action fight scenes too, created by a crack stunt team, featuring acts of sustained movie violence and some truly horrible deaths.

And again, the hair, glossy blond and chestnut waterfalls, shaggy manes, cute curls, epic facial sprouting – but if you hate spiders you may need to look away as these furry monsters are fabulously vile.

Acting honours to Martin Freeman’s Bilbo; with his chatty naturalistic dialogue and delivery, he’s like us, but hardier now, having found new courage and resourcefulness, caught up in an insane world, doing this thing because he promised he would. Also magnificent are Richard Armitage’s Shakespearean enraged and desperate King Thorin and Luke Evans’ handsome, roughened and surprisingly Welsh Bard, worn down by hardship.

Howard Shore’s score reprises some old friends and adds to the scale and mood of the film, and there’s a great song at the end, this time Ed Sheeran’s I Am Fire. Poetry and song are key in Tolkien, and I’d have liked more in this instalment.

This is a mad, energetic roller coaster, with great performances, engaging storytelling and a happy return to the best realised of all fantasy worlds. And the ending? Well, it takes a second for the audience to twig, then there’s an audible noooo… as we realise there’s a whole year more to go… PH

Speaking Well In Public offers a portfolio of public speaking courses for business, performance and social occasions designed and developed by Philippa Hammond, combining her skills and techniques as an award-winning trainer, working actor and voice artist. Philippa is a member of Equity and the Chartered Institute of Personnel and Development.
View all posts by Philippa Hammond »
« Review: Sherlock Season Three
Movie Catch-up: Haywire (2011) »

5 thoughts on “Review: The Hobbit: The Desolation of Smaug (2013), Alternative Review”