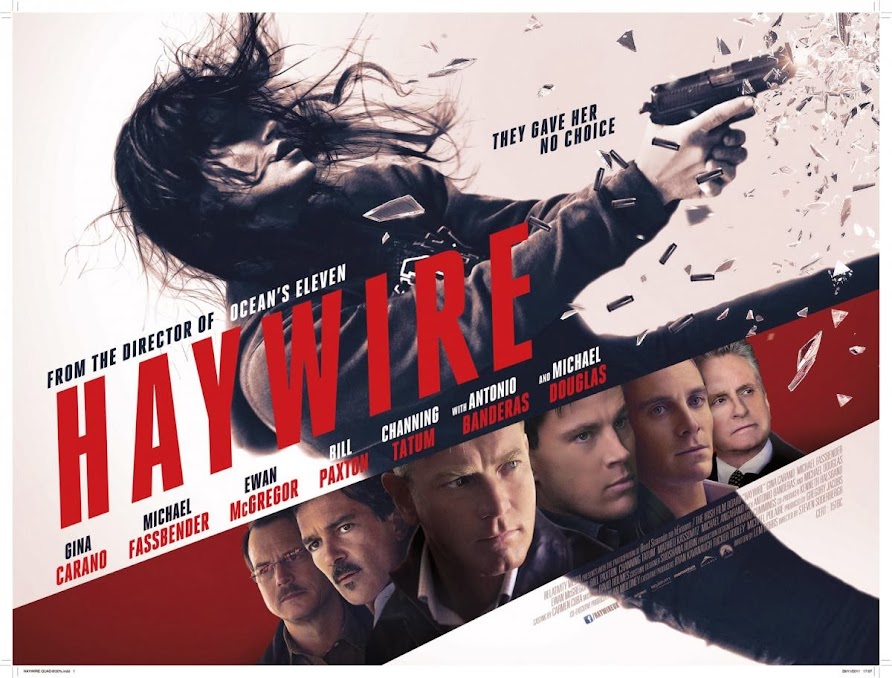 It’s no Bourne-by-Greengrass, the script by Lem Dobbs is a join-the-dots rehash, and the supporting cast look bored and confused; but the action is a thrill-ride that kept me away from the remote flipper.

Soderbergh, director of the sublime Out Of Sight turns his quirky hand to another genre movie, in which Carano’s framed and betrayed contract spy has to go on the run. And boy, the girl can run. And run. And climb. And kick, shoot, punch, fall down, get up and do it all again.

Michae Douglas turns up as the CIA spy-master to collect his cheque, Bill Paxton (Hatfields and McCoys) makes a virtue of doing nothing as Mallory’s dad, Ewan MacGregor (Jack) is once again smugly on autopilot, while Antonio Banderas becomes a dumpy Spanish bureaucrat. It’s up to Fassbender (Prometheus) to put his all into his suave English spy,

Gina Carano is the new action star, a real-deal, mixed martial-artist who scrubs up well and looks the part; tougher than Hanna, Salt and Dragon Tatoo‘s Noomi Rapace put together, the movie plays on her physical skills. So the acting is a little rough around the edges and it’s the presence of a TV fight star that carries her through. Fortunately this is no Bridges of Madison County, but the sort of ex-military, freelance-spy nonsense that she can get away with so much better than Angelina.

Of course, it is all stage-fghting. The fights all go on far too long, people get punched and kicked repeatedly, yet there’s no bruises and no blood. It’s all reduced to comic-book level as Carano takes on some big men including the opening set-piece in a diner against lumbering hunk Channing Tatum, and always comes out on top. Carano gets out of the Fassbender fight without so much as a bruise.

That said, Carano takes out two armed response Garda in a Dublin dry cleaners in the most stylish fashion.

Soderbergh is a master of atmosphere. The washed out palette, gracefully moving camera (hand-held wobble-cam specialists please note) and smooth editing are a throw-back to earlier movies without losing any of the dymanism. It’s all backed by a marvellous, classy 70’s jazz-noir soundtrack by David Holmes in the style of Lalo Shiffrin (Bullet)

Calm and still in all the right places, Carano’s not afraid to show the effort she’s putting in the rest of the time. Let’s hope this volatile and dangerous leading lady doesn’t get condemned to a life of genre knock-offs like Segal or Cynthia Rothrock. RC

Robin Catling gained degrees in both arts and technology which led to a diverse portfolio of employment. A freelance systems analyst, project manager and business change manager for the likes of American Express, British Airways and IBM, he moved on to web design, journalism and technical authoring. He has also worked in film and television, both behind and in front of the camera, including productions by Steven Spielberg, Martin Scorcese, Ron Howard and Ridley Scott. A qualified three-weapon coach, he runs West Devon Swords teaching sports fencing to all age groups, and in recent years qualified with the British Federation of Historical Swordplay to teach medieval and renaissance combat in the Historical Western Martial Arts.
View all posts by Robin Catling »
« Review: The Hobbit: The Desolation of Smaug (2013), Alternative Review
How-to: Avoid Dangerous Email Attachments »