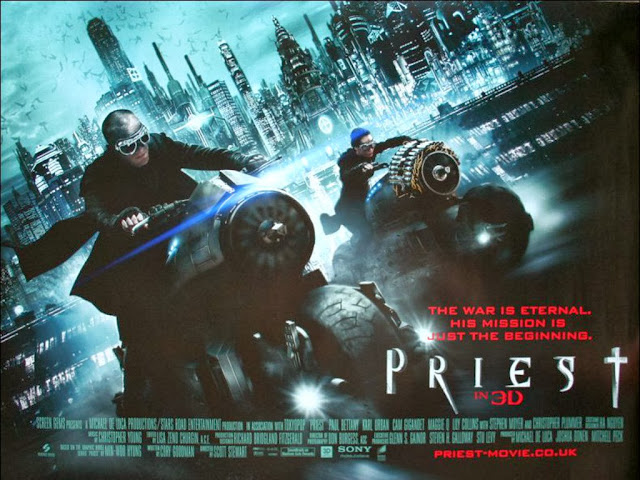 Manga comics have a lot to answer for in this misbegotten Franken-movie, combining classic Western The Searchers with Mad Max, The Matrix, Blade Runner and a big dollop of creature-feature CGI  vampires lifted from Cowboys and Aliens. And we know how that turned out.

A mis-cast Paul Bettany keeps his acting integrity as the titular priest, but for everyone else, it’s grimace and bear it and pick up the cheque.

The premise of this post-apocalyptic (aren’t they all) distopian future Western probably sounded good to the studio. Bullet-proof Monk type Priests versus Silent-Hill, Pan’s Labyrinth vampire creatures, lots of black leather, epic landscapes, cityscapes, caves; a Matrix-style fight atop a speeding train. What could go wrong?

The flattest movie in 3D, that’s what.

Bettany (Darwin, A Knight’s Tale) is the Warrior Priest from the last Vampire War, living in penury in the perpetual darkness of a walled-in dystopian city ruled by a hard-line Catholic Church.

Out in the wastelands, his niece Lucy (Lily Collins, The Mortal Instruments: City of Bones) is abducted by a pack of vampires. Priest breaks his sacred vows for a quest to rescue or kill her. That’s the John Wayne role in The Searchers. He’s joined by Hicks (Cam Gigandet) the brash young lawman, and Maggie Q as the last survivor of their order.

Karl Urban (Star Trek, Bourne Supremacy) is ill-served in the role of Black Hat – not even a proper name – the priest turned vampire (not much of a spoiler), with little to do but snarl and swagger.

Collins, a highlight of the atrocious Mirror, Mirror, gets to do little than be terrified and scream.

The train isn’t wrecked by love-lorn priest and part-time cover-girl Maggie Q, leaping from a speeding motorbike in  a leather breast-plate; it’s wrecked by Cory Goodman and Min-Woo Hyung’s direly adolescent script that drains your IQ faster than a vampire drains your blood.

You know a movie is in trouble when you have a double prologue. Even worse when it’s a badly animated back-story sequence lifted from the source manga, after the first live action prologue; worse still when the voice over is the worst kind of gravelly Basil Exposition.

What really kills it for me is the brain-dead premise at the start. It’s one thing to put Native American tribes on reservations, but to put the race of vampires that nearly destroyed the world on reservations under light guard and basically forget about them? Vampires so dangerous you nuked half the planet in a attempt to get rid of them? And then disband the order of warrior priests who defeated them? You deserve extinction, my friends.

If your capital city has enough technology for electric motorbikes that also use Nitrous Oxide, and can generate but not clean up perpetual smog, can you not monitor the reservation to know the natives have gone AWOL?

Director Scott Stewart goes about his business with vigour and a certain schoolboy relish – just as well as it’s only teenage boys will enjoy this. The stylish production design just about carries it through but that’s about it…

To paraphrase one of our own quotes, it is bad, but it’s not terrible. As a remake of The Searchers, its a league above Swayze’s Shane knock-off Steel Dawn, and several above Casablanca sacrilege Barb Wire, but unlike the Church, John Ford should not forgive… RC

Related: The Book of Eli

Robin Catling gained degrees in both arts and technology which led to a diverse portfolio of employment. A freelance systems analyst, project manager and business change manager for the likes of American Express, British Airways and IBM, he moved on to web design, journalism and technical authoring. He has also worked in film and television, both behind and in front of the camera, including productions by Steven Spielberg, Martin Scorcese, Ron Howard and Ridley Scott. A qualified three-weapon coach, he runs West Devon Swords teaching sports fencing to all age groups, and in recent years qualified with the British Federation of Historical Swordplay to teach medieval and renaissance combat in the Historical Western Martial Arts.
View all posts by Robin Catling »
« How-to: Check Compatibility with Windows 8.1
How-to: Understand Internet Nameserver records »