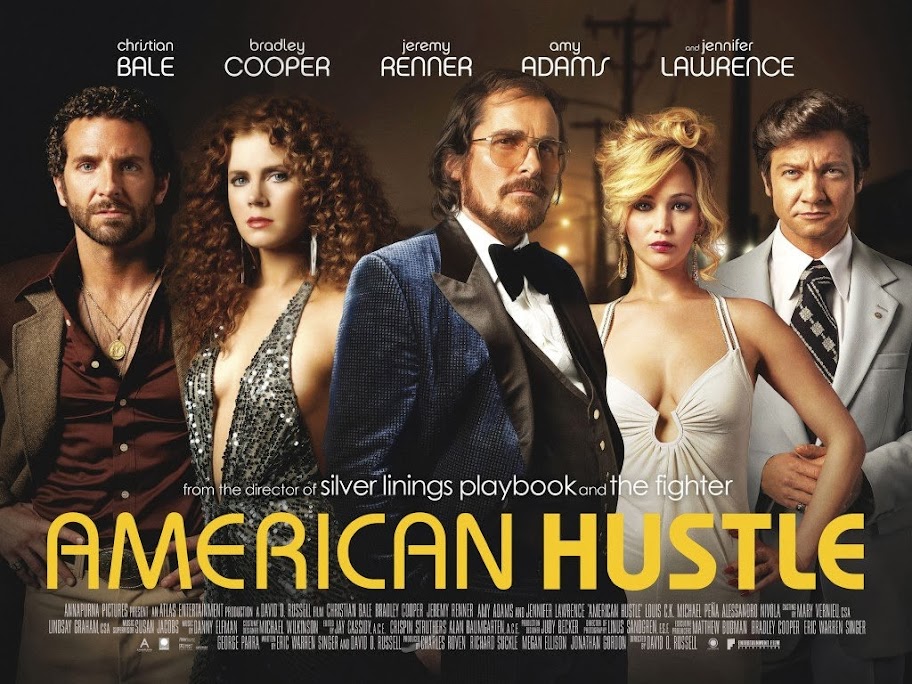 Some serious 70s hair and make up, but no Oscar nomination in that category, while The Hustle seems set to sweep all else before it. And like the director’s previous Silver Linings Playbook, it’s all a bit mad.

David O. Russell’s trademark off-the-wall and off-kilter view of America is filtered through this ‘based on a true story’ heist caper; a period movie that lets Russell’s repertory players light up and show off. But, sorry boys, it’s Amy and Jen who steal the show.

Note it’s not just any hustle, but an American hustle. Prefixing American is an especially American piece of trickery that says to the home market, “look at me, I’m important” or “be patriotic and hand over your cash because it’s American”. It’s an excuse to be a little bit controversial, a little bit knowing, a little bit pompous and a little bit self-important. All of which American Hustle certainly is. To the foreign market it says “come see this illuminating cultural artefact, this essential must-see social commentary”. So we do. Suckers.

Christian Bale (Batman) is New Jersey conman Irv Rosenfeld (extra points for playing Jewish?) with a gut and a comb-over, coerced by hyperactive FBI agent Richie DiMaso (Bradley Cooper – Silver Linings Playbook, The Hangover) into helping them entrap corrupt politicians, primed with the offer of bribes from a ‘fake sheikh’, a scam familiar in British tabloid newspapers in the 90s.

This Sting-lite wannabe has a wiseguy voiceover (nodding to Scorsese’s Goodfellas), rattling dialogue in the style of David Mamet, and all the shrill neurosis that is the Russell house style. Richie fantasises about pulling a gun on boss Stoddard Thorsen (Louis C. K.) for all his homely anecdotes about childhood ice-fishing trips. At least I think that’s a psychotic fantasy and doesn’t actually happen. Russell plays so fast and loose with the editing style, you sometimes lose your grip on reality as much as the characters.

Russell seems to have taken it as an excuse to make a brazen, flashy, needlessly complex piece of post-modern, back-slapping and slightly camp genre-nodding; an attempted throwback to a fashionably golden age of 70s thrillers, injected with black comedy, jittery banter and wacky hair: wigs, perms and beards. All topped off with huge sunglasses. And cleavage. Lots of cleavage.

Feeding some wonderfully arch, Woody Allenesque lines to the heist ‘crew’ of Bale, Lawrence, Adams, and Cooper, Russell provides the weapons for each to try to outdo the other in the dysfunction stakes, a four-way horse race in which they can all be clever, stupid, deceitful, heroic, cowardly, tough and shockingly brittle.

The Hustle is fast and loose, all right. You’d like to think it’s like the long con in The Grifters, designed to leave you, the ‘mark’, dizzy and disorientated. Although that could be praise too far. This is a consistently funny, black comedy wrapped in a caper structure with some excellent character work from a cast and crew clearly having a ball. That always invokes a sense of unease, when you can see everyone else having more fun making a movie than you’re having watching it. Perhaps there isn’t as much style or substance as we thought.

In which case, as a lightweight, period caper, does it deserve all its Oscar nominations? Would it have garnered all the attention if it was set in 2013 in modern dress with Jay-Z on the soundtrack? Russell is on a roll after Silver Linings. American Hustle is self-assured and making money. Is it significant or a long con of misdirection? The Academy doesn’t care. SC

Sue Corsten is a film and TV make-up artist based in the UK.
View all posts by Sue Corsten »
« Opinion: Kindness Really Does Cost Nothing [Guest Post]
Opinion: Surviving Actors’ Expos, Part One [Guest Post] »