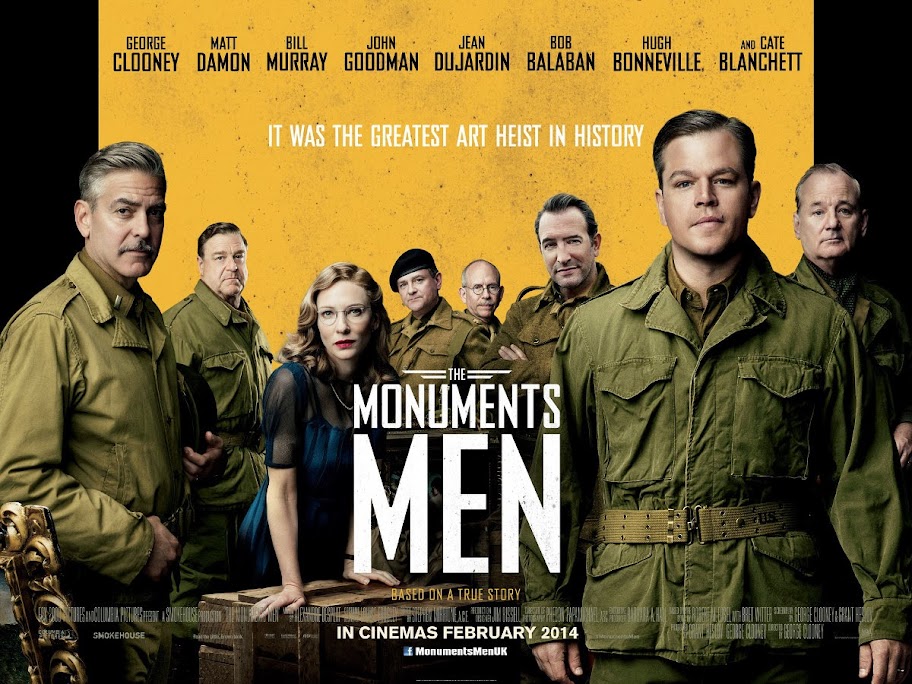 During the chaos at the end of WW2 as the Russians and Americans are circling the wreck of Europe, a man with a plan collects a motley team of art experts together to help retrieve and return a continent’s mountain of looted art treasures to its rightful owners.

If you’re looking for action, violence and large-scale spectacle you won’t get it – what this film excels in is its charming blokey friendships, with a ‘let’s get through this’ sense of humour and a different agenda at odds with the rest of the allies. Visually stunning recreations of the destruction and devastation of city, art and life mix with astonishing real archive images of stacks of priceless treasures and their epic hiding places.

Standouts are Hugh Bonneville’s charming failure, Bob Balaban’s underused prickly expert, while Jean Dujardin (The Artist) and George Clooney (Ocean’s Trilogy, Solaris) have the kind of faces that simply don’t belong in our time – and time is doing magnificent things to Clooney.

Bill Murray in the shower hearing a recording of his daughter singing to him played over the camp tannoy is a revelation in a restrained and gentle scene.

In fact, they’re all so damn decent there’s an unexpected jolt of loss and an “awww…” when the inevitable sometimes happens.

There’s a sense of subtlety in performance and Clooney’s direction that might lack excitement for some, and the fact that the story is at odds with the true events of the time has caused controversy. Don’t expect a historically accurate documentary; it’s an entertainment and, for me, this simple tale, straightforwardly told – get the gang together, throw them some problems, and get most of them out the other side – works. PH

Speaking Well In Public offers a portfolio of public speaking courses for business, performance and social occasions designed and developed by Philippa Hammond, combining her skills and techniques as an award-winning trainer, working actor and voice artist. Philippa is a member of Equity and the Chartered Institute of Personnel and Development.
View all posts by Philippa Hammond »
« Opinion: Surviving Actors’ Expos, Part One [Guest Post]
How-to: Surviving Actors’ Expos, Part Two [Guest Post] »