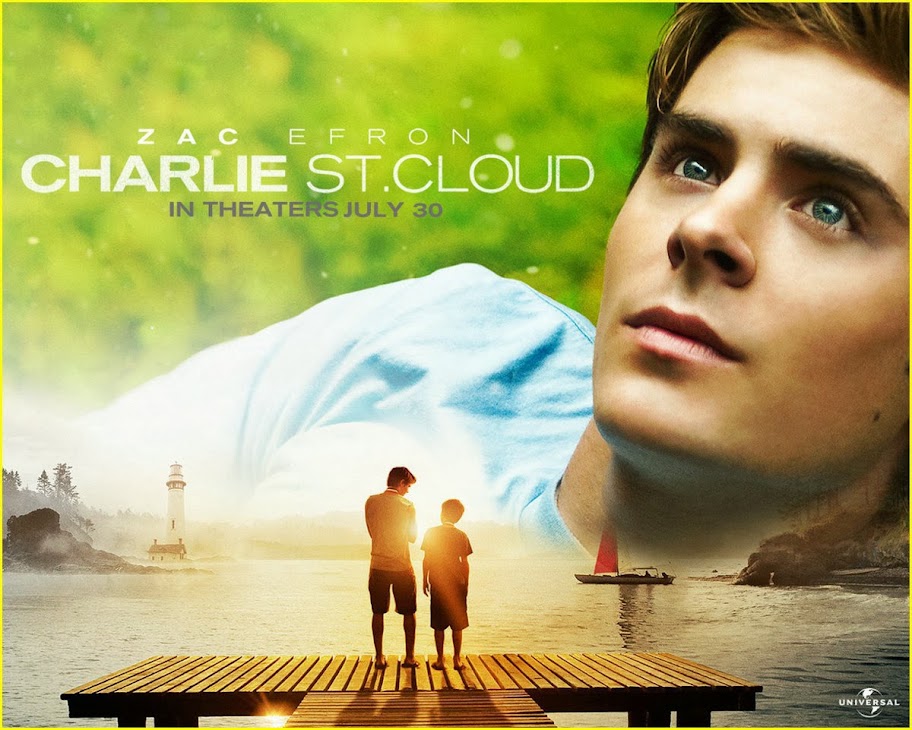 Life is for living: a hokey, magical-realism, ghostly romance is saved from Ghost Whisperer ignominy by the star quality of Zac Efron.

A supernatural drama based on the bestselling book by author Ben Sherwood, Charlie St. Cloud (Efron: High School Musical, Me and Orson Wells) is a hometown golden boy who wins a sailing scholarship to an Ivy League college, but in the summer after high school, a car wreck kills his younger brother Sam and Charlie is clinically dead until revived by paramedic Ray Liotta (Goodfellas).

Charlie was driving and, weighed down by guilt, puts his life on hold to work in the cemetery where he plays catch daily with Sam’s ghost. Then Charlie’s former high school classmate and sailing rival Tess (Amanda Crew) returns to town.

The setup is well-played for the first twenty minutes, the characters well-drawn, so the tragic car wreck packs a full punch, as does the ghostly reunion with Sam. Does Charlie have a unique connection to the afterlife or is this all in his head? There’s a lot of cheating and fudging of the supposed supernatural elements, but what it comes down to is the relationship between Charlie, Sam and Tess.

Without spoilers, the turnaround in the third act will either pop your jaw or you’ll have seen it coming way in advance, and there really is no question how it is going to resolve.

Your enjoyment of this handsome movie will come down to your opinion of Efron. Boy, does the camera love him and few people can stare dreamily into the middle distance like our Zac. I actually think the casting in this case works. Throughout, Efron has the star quality of an old-fashioned movie star; here he is the everyman (albeit a ridiculously pretty everyman) in the mould of a young Tyrone Power or Paul Newman. I know he isn’t to everyone’s taste.

Young Charlie Tahan impresses as Sam, a sympathetic and not irritating child lead, having an excellent rapport with Efron. And Amanda Crew (who is, of course, beautiful) almost convinces as a single-handed yachtswoman, when alternative casting (Imogen Poots or Amanda Seyfried) would have been completely laughable. There’s a genuine chemistry with Efron.

You do have to ask what is Alistair, played by Augustus Prew as Charlie’s workmate, doing? Channelling a bit of David Bowie, Russell Brand and Dick Van Dyke’s Mary Poppins chimney sweep, his British cockney comic relief is cringe-making in the extreme.

TV director Burr Steers (Weed, Big Love, and first feature with Efron, 17 Again) paints the idealized Pacific Northwest coast in a golden-syrup late-summer glow that you only get in movies such as Message in a Bottle and The Notebook.

Of course, it turns out that life is indeed for living; there are few surprises along the way, but Pearce and Colick turn in a solid script that walks the plank of clichés without falling in the drink. Oddly, though, I felt it could have been made a straight romantic drama without resort to the Ghost Whisperer airy-fairy elements, which would have given it a harder edge and done Efron’s career no end of good. Sail into the sunset with Charlie St. Cloud. RC

Robin Catling gained degrees in both arts and technology which led to a diverse portfolio of employment. A freelance systems analyst, project manager and business change manager for the likes of American Express, British Airways and IBM, he moved on to web design, journalism and technical authoring. He has also worked in film and television, both behind and in front of the camera, including productions by Steven Spielberg, Martin Scorcese, Ron Howard and Ridley Scott. A qualified three-weapon coach, he runs West Devon Swords teaching sports fencing to all age groups, and in recent years qualified with the British Federation of Historical Swordplay to teach medieval and renaissance combat in the Historical Western Martial Arts.
View all posts by Robin Catling »
« How-to: Surviving Actors’ Expos, Part Two [Guest Post]
News »