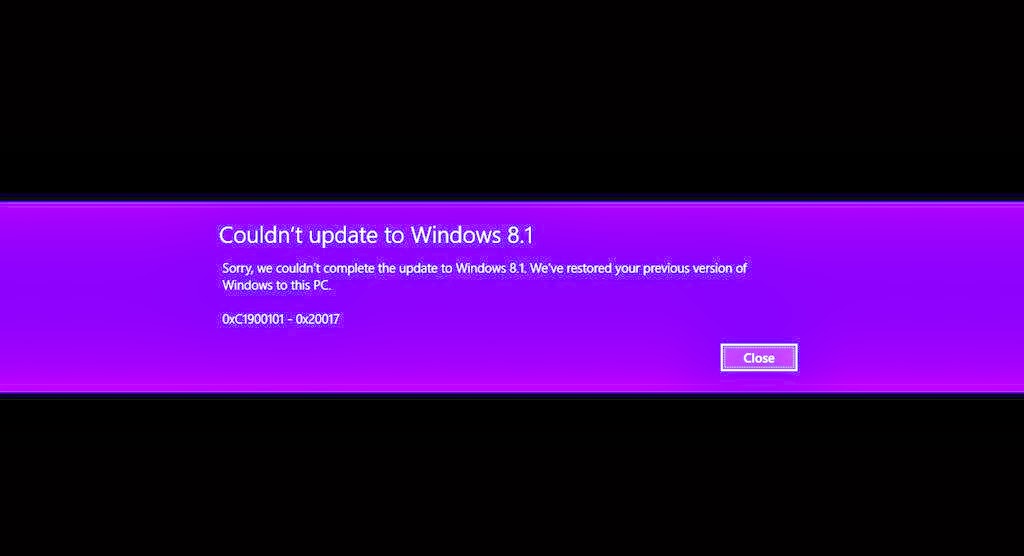 Microsoft recently released Windows 8.1, the upgrade to Windows 8 that added features and addressed some of the user’s pet hates (no, that didn’t include the Fischer-Price ‘Metro’/Modern-UI non-desktop).

Depending on how important you consider boot to desktop, SkyDrive (OneDrive) integration, and an updated UI, with dynamic Snap for multiple apps and sharing the desktop wallpaper with the Start screen, you might elect to go for 8.1.

Most of the changes, however, are under the hood and with its usual flair for snatching defeat from the jaws of victory, Redmond’s latest service pack – for that’s really what it is – injected for some Windows 8 users a host of deeply embedded flaws.

Simply getting hold of 8.1 might give you a minor sense of triumph. Windows 8.1 is available from the Windows Store – that’s the Store app in the Modern Live Tile start-up screen – as a free upgrade, as long as you’re using a Microsoft account to log into Windows, not a local user account. For existing Windows 8 users it downloads and installs without requiring any payment or preparation of installation media. Otherwise, upgrades can be purchased as a download.

However, Windows 8.1 has been reported as causing several issues during and after the upgrade. Here are some of the ‘highlights’:

Hardware support has become a hot topic not seen since Windows Vista (shrieks with horror). 8.1 breaks things somewhere deep in the driver stack, resulting in unrecognised or malfunctioning hardware; pointers, touchpads, backlights, sound among the most basic devices to suddenly go on the fritz.

Make sure that your graphics card driver is up-to-date before performing the upgrade.

To fix driver issues go to the manufacturer’s website or Windows Update – I’d suggest in that order as the manufacturers are likely to provide a better class of driver patches in the first instance.

It is possible that Windows may refuse to perform the 8.1 upgrade if it doesn’t like certain drivers. The only recourse may be to remove the specific driver, to which Windows objects, in order to complete the upgrade.  While Windows 8.1 may contain an approved version, it might not. At which point you could be left without some hardware. It might be prudent to back out, get an alternative driver, then run the upgrade.

Error Screens: on a related note 8.1 can halt on an error screen with a code of 0xC1900101 – 0×40017 or  similar. This is also driver related. You can try to get around this by unplugging as many of your peripherals as you can – down to just mouse and keyboard if you can. Thankfully, this is one error that the installer can roll back to Windows 8 so you can try again.

OneDrive (the artist formerly known as SkyDrive) may scarily misreport after the upgrade that all of your files are “online only”. Utter nonsense – this is incorrect – your files are still on your computer as before, but OneDrive settings are somehow lost. To resolve this, force OneDrive to resynchronize: open Windows Explorer, right click on ‘OneDrive’ in the left-hand pane of common folders, and click on ‘Make available offline’.

To upgrade from Windows 8.1 Preview, as Microsoft warned ahead of time, you’ll need to reinstall all of your desktop and Windows Store apps. You’re better off, in this case, running a complete clean install of 8.1 and clearing out all that messy beta code.

There’s no change in the hardware spec for Windows 8.1, so if you get the error, “Sorry, it looks like this PC can’t run Windows 8.1. This might be because the Users or Program Files folder is being redirected to another partition,” you’ll need to move your Users or Program Files folder back to the primary system hard drive/partition. This feels like a disappointing throwback to Windows 3.1; come on 8.1, if you know the folders have been moved, follow the trail in Windows 8 and find them, why don’t you? Instead, it’s up to the user.

Even after a supposed successful upgrade, Secure Boot may also pop a watermark in the corner of your desktop saying “Secure Boot isn’t configured correctly”. Supposedly out of concern for your system security, this has more to do with Microsoft maintaining its monopoly over your PC and to stop you dual-booting other operating systems. To ditch the watermark, you’ll have to open your machine’s BIOS and change the Secure Boot settings to enable or configure it. Since BIOS settings vary, you’ll need to check the manufacturer’s manual or website for the right settings; otherwise, you can ‘brick’ your machine and render it unbootable.

Conclusion
Unless there’s a feature in Windows 8.1 you absolutely must have, there’s no real reason to upgrade right now. Windows 8 is shipping patches and updates and, unlike, say, Windows Vista, is not of itself so broken that a point release service pack brings a huge benefit. AJS

Allan J. Smithie is a journalist and commentator based in Dubai.
View all posts by Allan J. Smithie »
« How-to: Fix Untrusted Connections in Firefox
Review: Gravity (2013) »