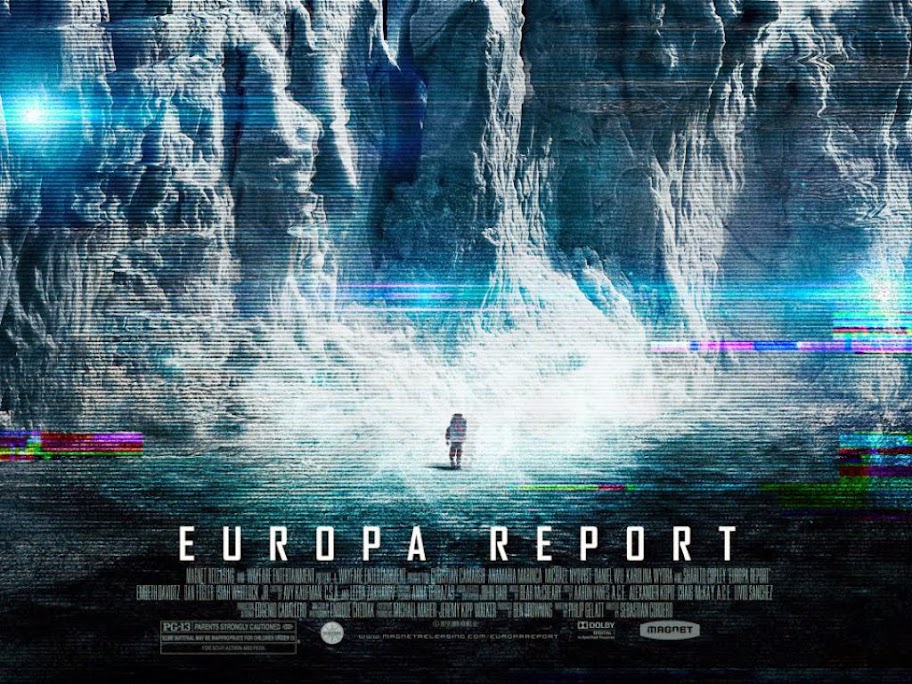 Despite a title that sounds like an EU treaty from Brussels, the Europa Report is a ‘found-footage’ sci-fi thriller that crosses Blair Witch with The Abyss. In space.

With the challenges of deep space exploration coming to the fore in factual shows such as the BBC’s Horizon, and in fiction with the aborted Defying Gravity series, The Europa Report focuses on a manned mission to the body most likely to contain life in our solar system: Jupiter’s moon, Europa.

Hardware-heavy and with a fractured, CCTV and talking-heads narrative, the admirable cast nonetheless turns in fine performances as astronauts facing their own, fragile mortality. If it can go wrong, it does; and in space, no one can hear you say “I told you so”.

Based on current data that suggests life could exist beneath the ice of Europa, this movie imagines a privately funded space exploration, Europa Ventures, sending a mission under contract to prove or disprove the theory.

Naturally on such a long voyage, solar flares go off, things break down; there are tense space walks, fatalities and the gradual disintegration of the top-notch crew of engineers and scientists.

Once on the surface of Europa, further problems arise from landing off-course. And wouldn’t you know it if one of the crew doesn’t see moving lights on the surface.

Tense, claustrophobic and, for the most part, quite believable for the science geeks, the picture is solidly directed by Sebastián Cordero from an earnest, if derivative, script by Philip Gelatt. Certainly the cast keep their integrity, despite being far too pretty for and too awestruck by the whole mission. But it is the script that somehow falls flat. The intercutting of ‘found footage’ and talking heads with the action, all needlessly jumbled out of sequence, will probably ruin this for most of the audience.

If it doesn’t, just feel how out of place is the electronic and strings soundtrack that fades in and out at all the wrong moments. If you’re doing ‘found footage’ of real life, just remember there’s no room for an orchestra in a space capsule.

The extreme close-up helmet-cam shots are very Blair Witch; the exploration of Europa’s ocean by a stranded crew of earnest stalwarts is The Abyss. You could add the mystery element of The Sphere (but please don’t); the portentous, even pompous overtones of 2001 and its sequel 2010, and the against-all-odds survival tale Apollo 13. Just don’t compare it with Oscar-triumph Gravity.

You pretty much know the outcome of all the set pieces as they crop up; yet the pervasive air of doom and gloom isn’t anywhere near as well done as Danny Boyle’s masterpiece, Sunshine.

Ultimately, it’s not Blair Witch, or the Abyss, it’s no creature-feature either, no X-Files, no Alien Hunter; and the character interplay lacks the sparkle of the lamented Defying Gravity TV show. As a low-budget space feature, it fills the time well enough and doesn’t outstay its welcome. But it doesn’t exactly go where no one has gone before. RC

Robin Catling gained degrees in both arts and technology which led to a diverse portfolio of employment. A freelance systems analyst, project manager and business change manager for the likes of American Express, British Airways and IBM, he moved on to web design, journalism and technical authoring. He has also worked in film and television, both behind and in front of the camera, including productions by Steven Spielberg, Martin Scorcese, Ron Howard and Ridley Scott. A qualified three-weapon coach, he runs West Devon Swords teaching sports fencing to all age groups, and in recent years qualified with the British Federation of Historical Swordplay to teach medieval and renaissance combat in the Historical Western Martial Arts.
View all posts by Robin Catling »
« Review: Gravity (2013)
How-to: Animated GIFs using GIMP »