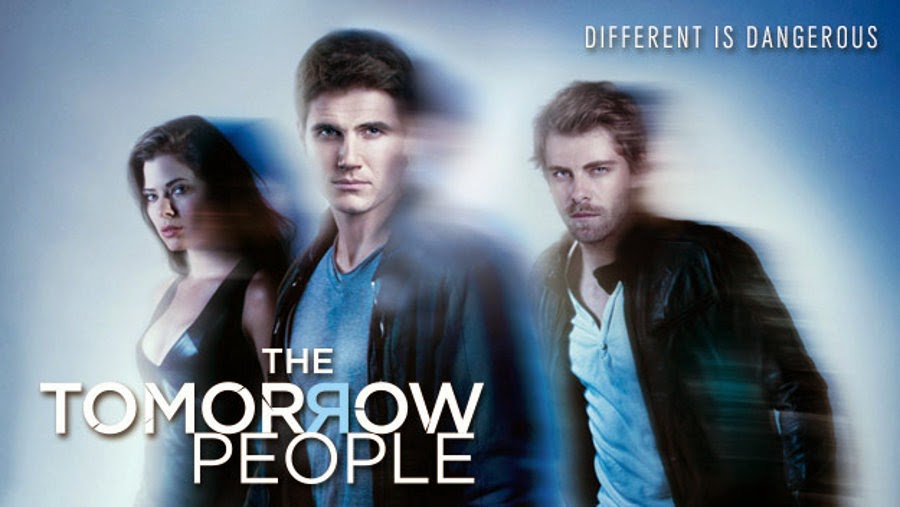 Those of a certain age will remember a small British kids’ TV series from the 1970’s called The Tomorrow People. Big on ideas, low on budget, it was tea-time sci-fi with fish-fingers for the under 12’s.

Well, like most TV, it’s been re-invented as one of those identi-kit American sci-fi shows; a middle-budget, flat-pack adventure hour shot with workmanlike efficiency by Canadians, filled with infeasibly pretty boys and girls getting angsty on a weekly basis.

The bastard child of Roswell High and The Vampire Bloody Diaries,  with a DNA injection from Smallville and ambitions to be Alphas, or Heroes, or… well anyway it comes across as a High School Musical version of Agents of Shield (and you thought Agents of Shield was the High School Musical version of Agents of Shield)…
Steven (Robbie Amell) discovers he is one of a group of ‘teenagers’ (used advisedly) with special powers. Honestly, these days, who doesn’t have special powers? On the one side is Ultra, a shadowy, neo-fascist organisation darker than the CIA with an obsession for eugenics. On the other side, John, Cara and a band of renegades – the Tomorrow People, blessed with the three T’s – Telepathy, Telekinesis and Teleportation. In the middle, various rogue elements coming in as villain-of-the-week.

What do you know, Steven’s father disappeared when he was a child after working with his uncle Jedekiah (identi-kit villainy from Mark Pellegrino) at Ultra.

From week one, we’re neck deep in layers of conspiracies, plots, counter-plots, love triangles between infeasibly pretty people, and countless medical and technical maguffins to bend the ‘rules’ (too many rules) and keep the pot boiling.

The Tomorrow People led by John (Luke Mitchell) and Cara (Peyton List) are on the run, concealing their powers and their existence whilst trying to stop the duplicitous Jedekiah and the mysterious Founder.

Everyone is working terribly hard on not terribly original material. It’s one of those production-line shows that wants to be dramatic and grand and operatic but manages to be over-wrought AND so bland that it makes tapioca pudding exciting. Yes they can all act, but I really don’t care about any of them and their constant whining, back-biting, bitching and moaning.

At least Shield and its grand-dame Buffy have a sense of humour. The Tomorrow People is so po-faced and serious it lacks any light and shade at all.

While the special effects and fights are seamless, they are also completely ludicrous. So yes, we’ve proven that we can take a decent idea and remake it as something expensive, but as we found with the Thunderbirds movie, or Heroes (a remake of everything), that doesn’t make it better.

Robin Catling gained degrees in both arts and technology which led to a diverse portfolio of employment. A freelance systems analyst, project manager and business change manager for the likes of American Express, British Airways and IBM, he moved on to web design, journalism and technical authoring. He has also worked in film and television, both behind and in front of the camera, including productions by Steven Spielberg, Martin Scorcese, Ron Howard and Ridley Scott. A qualified three-weapon coach, he runs West Devon Swords teaching sports fencing to all age groups, and in recent years qualified with the British Federation of Historical Swordplay to teach medieval and renaissance combat in the Historical Western Martial Arts.
View all posts by Robin Catling »
« How-to: Optimising animated GIFs using GIMP
How-to: Diagnose an SD Card that’s stopped working »