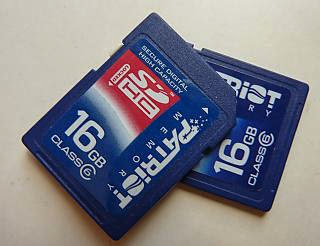 It never ceases to amaze me how resilient is the humble SD card. They take heat, cold, damp, weight, an infeasible amount of weight, bending and mistreatment. And, unlike most of your other electronic gadgets, magnets and magnetism don’t affect SD cards; the amount of electro-magnetism it takes to corrupt the bits on EPROM flash memory just doesn’t exist in the average home or office.

But when they stop working, they just stop. No warning. No grace period. They just stop. So when the message comes up ‘cannot read media’, what’s the likely cause and can you do anything? There are data recovery services for SD cards and hard drives, but given the specialist, often manual work involved, they are very, very expensive. So how else can you diagnose one?

It’s in the wrong format
A supposedly a blank SD card can’t be read. Is it blank? When was the last time you used it? Have you used it in multiple devices? Different phones? Different cameras?

It’s possible that your SD card is formatted for a different device than the one you’re using to try to read it. Cameras, phones and computers can use a variety of formats – some of them proprietary – so try it in your other devices and when you find one that reads it, remove any important files from the card; you can then reformat the card for your intended device.

Unsafe Ejection
If you yank an SD card from a device, or shut down a before all files have finished saving and the card index file table is updated, the result is pretty much the same; you are going to scramble either the files or the index table you need to read ANY of the data on the card.

Chances are you will probably need to reformat it.

The Case is damaged
Fire, flood, crushing and washing machines can physically damage SD cards to the point they stop working. In this case, there may be nothing more you can do.

Keep loose SD cards in their proper cases, be disciplined and put them in a safe place every time you remove them from a device. Don’t spill coffee of cola over them.

The card is locked
SD cards have both a hardware AND a software lock which can be applied so none of the files are changed or erased. While it’s very easy to lock and unlock your card, sometimes this can go wrong at both the hardware and software level.

Hardware locked
Look at the side of most SD cards and you will see a tiny flip switch, usually a different colour from the rest of the case and usually labelled ‘lock’ in one position. Just flip it off the locked position, and the card should be writeable.

Some cards don’t have a label, so you have to guess which is the locked and unlocked position.The majority follow a standard where the down position is locked. However I have one, unlabelled card on which the switch positions are reversed.

Software locked
There is also a software switch that can be set to render a card un-writeable. In the main, it’s difficult to set this by accident, although some file managers and devices have an option to set this in software. It is also possible when using multiple devices and readers to set this accidentally. It can be very difficult to un-set it; re-formatting the card can sometimes work, but you may need specialist software tools to recover it and any data.

Your card reader is too slow
Older and cheaper card readers can struggle to keep up with the speeds of newer SD cards. Try to read a large, highly compressed file from a fast device onto a slower one can cause problems. Connecting devices using a USB cable or via slow wi-fi can also reduce the transfer rate to a point when it appears to stop working.

A newer, faster SD card reader should fix the problem. Don’t confuse this with the amount of processing power you may need to decode compressed video files, for example.

The write speed is too slow
It may be that your SD card is too old or too slow for the device you are trying to write from. HD video cameras like mine and digital SLR’s now need fast cards to write the vast amounts of digital data in real time. A slow SD card will simply fail; either giving up and saving nothing or saving partial files as the write buffer overflows or skips write cycles.

Check in the manual the recommended write speeds of cards for your device. AJS

Allan J. Smithie is a journalist and commentator based in Dubai.
View all posts by Allan J. Smithie »
« Review: The Tomorrow People Season 1
News: Full Circle 83 is here to make you feel guilty about your spending »