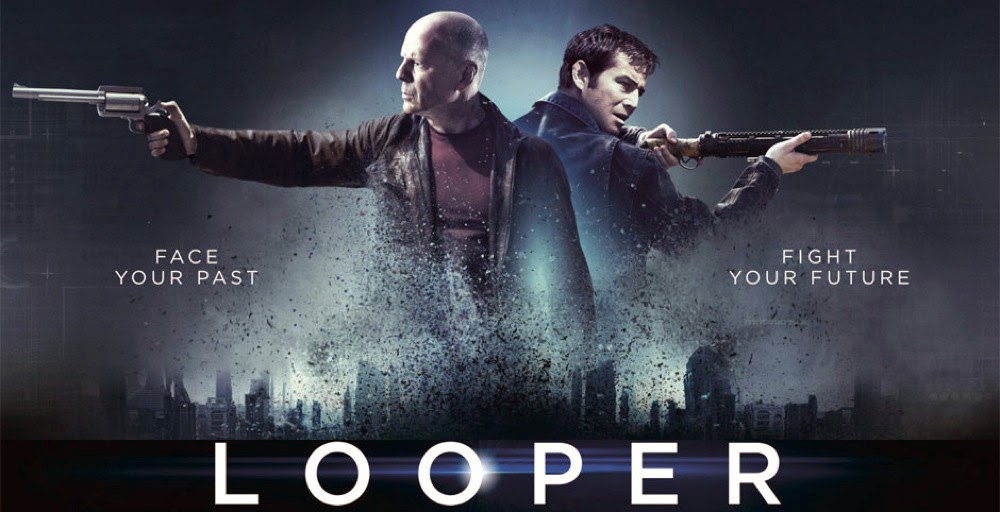 In 2077, time travel is invented and immediately banned; not that it stops criminal syndicates using it to ‘disappear’ their victims back to 2044 where contract killers – loopers – dispose of them, until the day their older selves are sent back for disposal to ‘close the loop’.

Rhian Johnson’s Looper is smart, tense, suspenseful and just left-field enough to be out of the ordinary. And like ALL time travel movies, makes no sense whatsoever once the time paradoxes start flowing.

John-Gordon Levitt (Brick, The Dark Knight) as Young Joe does a fantastic impression of Old Joe; Bruce Willis (Die Hard, Fifth Element) in his best performance since time travel head-breaker Twelve Monkeys. But Emily Blunt (The Adjustment Bureau) is again in a different class to the boys.

Levitt is the hedonistic, violent, amoral street-kid turned hitman, addicted to drugs and hookers (in particular Piper Perabo), accepting his eventual fate of past-future death at his own hands. In the future, his older self (Willis) straightens out for the love of a good woman until his past catches up with him (irony intended). Escaping Young Joe, Old Joe Willis sets out to kill the Rainmaker, head of the syndicate ruling 2077, who in 2044 is only a child. All clear?

Heavily in debt to Christopher Nolan’s Memento and James Cameron’s The Terminator, the whole change-the-past-to-save-the-future plot is not new; see Time Cop, Star Trek, any number of B-movies and TV sci-fi episodes. Long before the older and younger Joes sit down in a diner and fail to address the time paradoxes, the central time-travel conceit has long disappeared up its own tail pipe.

The setting of 2077 makes no sense and 2044 is stuck in 1940’s Raymond Chandler retro-noir, a run-down tenement town ruled by Jeff Daniels’ superbly restrained 2077 mob-boss Abe. Surrounded by black-coated gun-slingers – one of whom is Terminator ‘Chronicles Garret Dillahunt – Daniels is the enforcer with pre-knowledge of the future.

Engaging as it is, Looper really kicks up a gear when Levitt escapes the city for rural America. Finding a mesmerising Emily Blunt as single mother to her young son, a telekinetic prodigy and one of the candidates to become the criminal overlord of 2077, Levitt lies in wait for his older self to track them down on the farm. It is Blunt who provides the emotional heart of the film and rescues it from the chilly, amoral action movie that would otherwise play out.

In style, tone and plotting, Looper is all over the place. While the Loopers‘ executions hark back to Miller’s Crossing, surely there are bigger and better ways for criminal mastermind The Rainmaker to tinker about with the time-continuum than this?

The truth is that time travel is a set-up device, and noir-director Johnson – who made Brick with Levitt – is more interested in character and motivation than plot. With the focus on a few characters, it matters less that Looper cheefully flip-flops between intense cerebral morality sci-fi and muscular action flick. Lost Boy Levitt confronts his moral choices whilst driven avenger Willis recaptures his Last Man Standing days by violently taking out an entire lair of mobsters single-handed.

The outcome is sign-posted from ten minutes in, and of course, makes a nonsense of the entire proceedings, but don’t let that stop you. For all it’s hover bikes and big guns (not to mention the Tate Modern, abstract-washing-machine-art-installation that happens to be the time machine) this is no Back to the Future. Fortunately. Treading the footsteps of Inception, Looper does intelligent sci-fi with heart. RC

Robin Catling gained degrees in both arts and technology which led to a diverse portfolio of employment. A freelance systems analyst, project manager and business change manager for the likes of American Express, British Airways and IBM, he moved on to web design, journalism and technical authoring. He has also worked in film and television, both behind and in front of the camera, including productions by Steven Spielberg, Martin Scorcese, Ron Howard and Ridley Scott. A qualified three-weapon coach, he runs West Devon Swords teaching sports fencing to all age groups, and in recent years qualified with the British Federation of Historical Swordplay to teach medieval and renaissance combat in the Historical Western Martial Arts.
View all posts by Robin Catling »
« How-to: The 5 Forms of Facebook Followers and How to Keep Them [Guest Post]
Opinion: A Little Extra Support Part Two [Guest Post] »