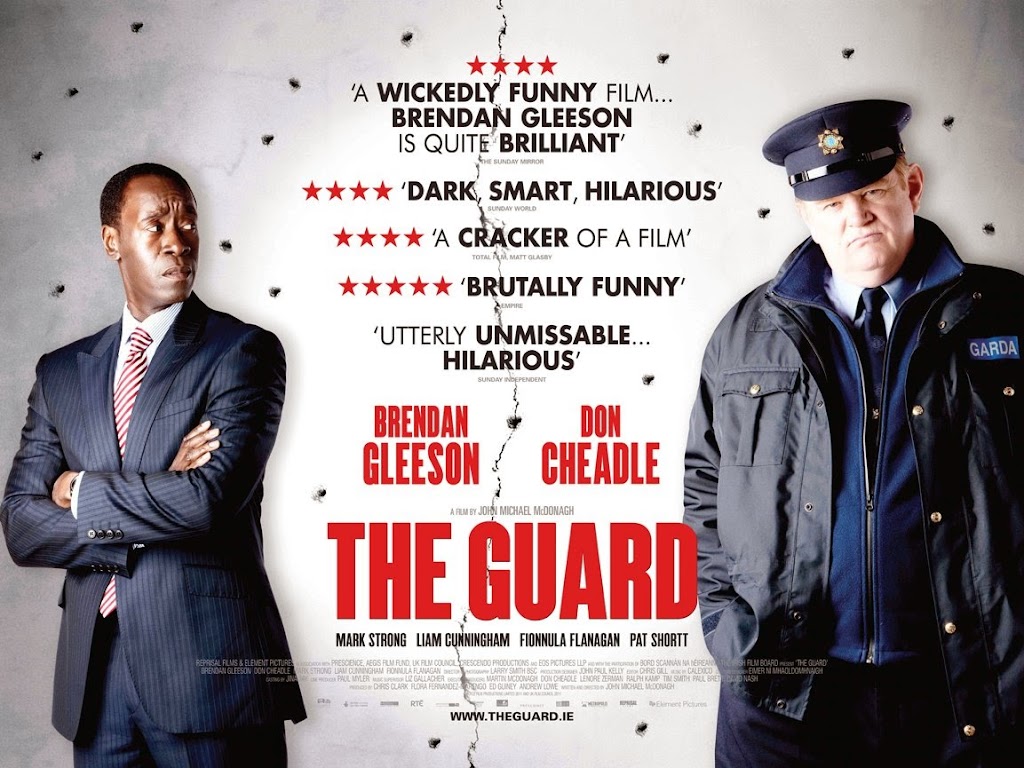 Move over Don Cheadle, it’s Irish whimsy and Brendan Gleeson all the way in this black comedy replay of High Noon; a violent, profane tale of drug trafficking, casual murder and police corruption amid the Paddy stereotypes of the Emerald Isle .

His Irish liaison is the crass and confrontational rural police Sergeant Gerry Boyle (Gleeson – Harry Potter, Troy), whose interests include class-A drugs, prostitutes, swimming, Russian literature and casual racism – “I’m Irish. Racism is part of my culture.” With an incisive Columbo-like persona and his own moral code, world-weary Boyle appears to be the only man in Ireland with any shred of integrity.

The Guard may have been sold on the posters as a ‘raucous comedy’, but the violence and profanity are anything but. Add a sub-plot of Gleeson with his terminally ill mother (Finoula Flanagan) and Irish melancholy almost overwhelms it.

The movie continually undermines itself with some surreal set-pieces; scathing token-Brit Strong hands over a briefcase full of money to two senior police officers, a bizarre dissection of payoffs in broad daylight atop the harbour lookout station.

In a sub-plot, Gleeson contacts the IRA to dispose of a recovered cache of arms; cue chubby, stetson-wearing IRA man in bright orange VW Beetle for yet another surreal conversation: “Didn’t know you had gay lads in the IRA.” “To be sure, it was the only way to infiltrate the MI5.”

In tone The Guard is aiming for the other MacDonagh brother’s movie In Bruges. Every Irish cliche is included, usually to the purpose of subverting it to expose the Irish heart of darkness. The timeless charm of the Emerald Isle is nothing but Irish blarney; this Ireland is a grubby cesspool of vice and corruption.

The Guard confounds expectations. You thought you were getting Beverley Hills Cop in Ireland; a comic fish-out-of-water buddy movie. But no, The Guard swiftly becomes High Noon, with Gleeson the maverick cop going after the bad guys when they’ve bought off the entire Irish police.

Despite being a picture with too much thrown in, it has an Indie movie sensibility right up to the climax, where it has to bring back Cheadle, and finish with the obligatory shoot-out and big explosions to get its studio funding.

Settle in and let the big man Gleeson impress you. RC

Robin Catling gained degrees in both arts and technology which led to a diverse portfolio of employment. A freelance systems analyst, project manager and business change manager for the likes of American Express, British Airways and IBM, he moved on to web design, journalism and technical authoring. He has also worked in film and television, both behind and in front of the camera, including productions by Steven Spielberg, Martin Scorcese, Ron Howard and Ridley Scott. A qualified three-weapon coach, he runs West Devon Swords teaching sports fencing to all age groups, and in recent years qualified with the British Federation of Historical Swordplay to teach medieval and renaissance combat in the Historical Western Martial Arts.
View all posts by Robin Catling »
« Opinion: A Little Extra Support Part Two [Guest Post]
How-to: Get More Facebook Fans [Guest Post] »