Review: 100 Simple Things You Can Do to Prevent Alzheimer’s and Age-Related Memory Loss 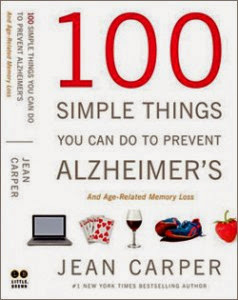 Genetic factors aside, it seems that our modern lifestyle is a sure fire method to increase our chances of developing the condition. Until we have effective treatments, the only way to beat Alzheimers is to prevent it for as long as possible.

Medical journalist Jean Carper discovered she had a genetic disposition to Alzheimers and set about researching the latest scientific evidence in search of preventive measures.

This slim, readable and lightweight (used advisedly) volume gathers one hundred “simple, scientifically tested ways” to cut the odds of Alzheimer’s, memory decline, and other forms of dementia.

And after only 25 or so of the short, single-idea chapters, I could sum it up as ‘eat right, exercise, keep you mind and body active and take everything in moderation – alcohol, caffeine, fruit juice – and with luck, you’ll stay pin-sharp into old age.’

Take some examples: vitamin B 12 helps keep your brain from shrinking; apple juice mimics a common Alzheimer’s drug; a little caffeine is good for you, along with a moderate amount of red wine. Meditation and the Internet stimulates neurons.

Then again, common infections and surgical anaesthesia can trigger dementia. So if you’re already unwell, don’t read this.

The book also plays around with statistics; if you can delay the onset of Alzheimer’s for five years, you cut your odds in half. Delay Alzheimer’s by ten years, you’ll probably die before you develop it. Given the bell curve of age of onset, I’m not sure that helps, but then I’m not Jean Carper.

Her creative brain (clearly fighting the Alzheimers on all cylinders) produces maybe 20 measures to delay the onset of Alzheimers, then spends the next thirty chapters riffing on the same themes, throwing in general well-being, lifestyle tips like you get in the health columns of the dailies – Carper wrote USA Weekend‘s “Eat Smart” column for years.

The other fifty chapters describe how the opposites of the first fifty increase your chances of Alzheimers, so don’t do them.

As an experienced medical journalist, looking for a mainstream non-medical best seller (tick), Carper reviews recent actionable research, be it solid or speculative, on ways to postpone, or slow the development of Alzheimer’s.

100 Simple Things is a fun, quick read, like a serialised column; but it becomes repetitive and slightly patronising, like a frothy but light-weight self-help seminar, or a filler in the back of a glossy weekend supplement. Which is fine if that’s how you like to get your life-changing non-medical medical advice.

Although each chapter presents a specific thing you can do with a concise summary of the research and ending with a “what to do” section, it is all a bit trite. “What to do til we find a cure” is probably a better title, but I don’t suppose it would have sold as many copies. RC

Robin Catling gained degrees in both arts and technology which led to a diverse portfolio of employment. A freelance systems analyst, project manager and business change manager for the likes of American Express, British Airways and IBM, he moved on to web design, journalism and technical authoring. He has also worked in film and television, both behind and in front of the camera, including productions by Steven Spielberg, Martin Scorcese, Ron Howard and Ridley Scott. A qualified three-weapon coach, he runs West Devon Swords teaching sports fencing to all age groups, and in recent years qualified with the British Federation of Historical Swordplay to teach medieval and renaissance combat in the Historical Western Martial Arts.
View all posts by Robin Catling »
« Humour: Types of Apps
How-to: Blend Images using the GIMP »

2 thoughts on “Review: 100 Simple Things You Can Do to Prevent Alzheimer’s and Age-Related Memory Loss”