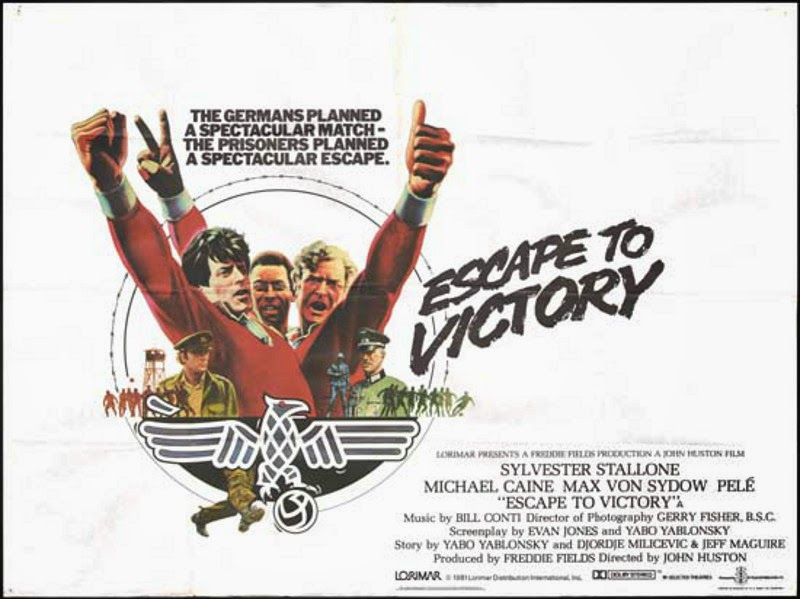 In our only concession to the Soccer World Cup, Michael Caine and Sly Stallone defy the Nazis in this throw-back WWII prisoner-of-war-with-soccer movie, aided by Pele, Booby Moore and a host of International soccer stars. Time to party like it’s 1966.

Aside from the cliched plot and the flat script, the biggest question is can any movie dramatise football in any way to make it as exciting as the real game? Assuming you think football is exciting to begin with?

Hollywood immortal John Huston (The Maltese Falcon) does a workmanlike job of directing a stolid WWII Stalag-script. Allied prisoners of war are coerced into playing an exhibition match of Association football against a German team in Colombes Stadium in Paris, exploited for maximum propaganda effect by the Nazis.

Principals Max Von Sydow (Solomon Kane) and Michael Caine (Inception) are honourable former International soccer players whose friendly match is subbourned by the Nazi machine; but this provides the opportunity for a daring escape attempt. Maverick American Stallone (a former high school soccer coach during his Vietnam draft-dodge) is roped in as goal-keeper and US star-name for the poster. Acting honours go to the supporting cast of Tim Piggot-Smith and Daniel Massey.

The elderly Huston (China Town), creates an old-fashioned World War II morality play, drenched with nostalgia, with soccer as an idyll of extinct sportsmanship and a civilized metaphor for war. With England’s legendary and rather dubious World Cup win against the Germans in 1966 ever in the mind, you’re supposed to root for the Allied under-dogs victory and escape against the odds.

If you were expecting Stalag-17 or The Great Escape, you’ll be severely disappointed, although there are some nicely choreographed reminders of the ball skills of Pele and the soccer squad. It’s thin as both war movie and sports movie. Despite trying, I struggled to think of any decent soccer movies – Bend It Like Beckham and Gregory’s Girl are about relationships, not soccer. Goal! failed to set the world alight, while A Shot at Glory, Jimmy Grimble and When Saturday Comes are earnest but flat dramas that tread a water-logged pitch.

Escape to victory is one of those middle-period, hokey Caine vehicles lacking a decent script or any real energy. The dialog thuds off the wood-work (the goal-posts for non-English fans) like so many mis-directed free-kicks, the plot goes off-side at regular intervals and while it is nice to see so many retired soccer stars display their skills, acting isn’t one of them – this is the 80’s before the operatic ‘dive’ for a penalty kick came to prominence.

Otherwise it’s A Boy’s Own Adventure produced way out of its time, more like 1961 than 1981; and is laughable to fans of war movies and soccer alike. RC

Robin Catling gained degrees in both arts and technology which led to a diverse portfolio of employment. A freelance systems analyst, project manager and business change manager for the likes of American Express, British Airways and IBM, he moved on to web design, journalism and technical authoring. He has also worked in film and television, both behind and in front of the camera, including productions by Steven Spielberg, Martin Scorcese, Ron Howard and Ridley Scott. A qualified three-weapon coach, he runs West Devon Swords teaching sports fencing to all age groups, and in recent years qualified with the British Federation of Historical Swordplay to teach medieval and renaissance combat in the Historical Western Martial Arts.
View all posts by Robin Catling »
« How-to: Prevent Drive Failures with Gsmart [Guest Post]
Opinion: Web Design Trends 2014 »