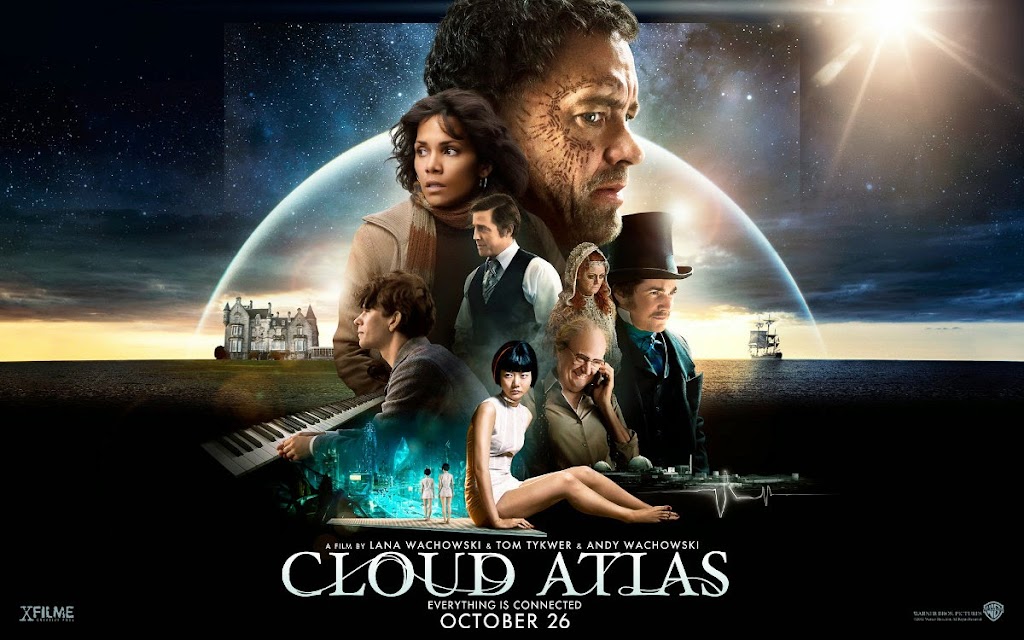 A talented ensemble cast swap wigs, prosthetics, race and even gender in multiple roles, but the question remains; is the sprawling, interlocking, portmanteau fantasy-drama a breath of fresh air or an epic failure? You can see why so many award-winners signed up for the challenge; there are some stunning performances; but no amount of makeup can make up for the pretentious twaddle at the heart of the script.

Adapted from David Mitchell’s novel of the same name, Cloud Atlas tells six stories in a variety of genres spread over a period of nearly 500 years, from 1850 to 2321. As a technical exercise, it is a stunning assembly; six plots and six sets of characters that form six distinct movies cut together with profanity, nudity and some graphic violence; but the house of cards threatens to topple over about every ten minutes.

The Wachowskis fancy themselves as philosophers and visionaries, which is why they, with arthouse director Tom Twyker, took on the ‘unfilmable’ novel. These days, anything is filmable, but does that make a decent movie?

With the Wachowski’s best known for pompous, ponderous, but visually ground-breaking The Matrix trilogy, and Tykwer for Run Lola Run, a German kinetic art-house movie of three versions and three endings of the same tale, followed by Perfume, a trippy, absurd adaptation of a magical-realism novel, here are three film-makers with no shortage of ambition.

Tykwer directed the three contemporary stories; a 1930’s gay musician attached to a faded old composer, a 1973 conspiracy thriller and a senior comedy of a present-day, impoverished publisher incarcerated in a retirement home.

Ben Wishaw (Skyfall) is compelling as nascent musical genius Frobisher, the tragic outsider, composer of the Cloud Atlas Sextet, played throughout the movie. This section is a Merchant-Ivory set-piece done as melodrama. Halle Berry is at her best as Luisa Rey, 70’s reporter uncovering a plot to melt-down a nuclear reactor. It’s The China Syndrome with added CGI. Twyker provides the comic relief with Jim Broadbent’s amoral publisher involved in a senior citizen’s Great Escape from the Cuckoo’s Nest with a trio of elderly residents. Somehow Broadbent engages our sympathies for the repugnant publisher, with his loss, regret and bewilderment.

The Wachowskis made the slavery tale of an American lawyer converted to abolitionist, and the two grand sci-fi mini-epics; a distopian action-adventure and a Last of the Mohicans-meets-Mad Max space opera.

The Wachowski’s replay Amistad and pre-figure Twelve Years a Slave, with Jim Sturgess undergoing a change of heart in response to the brilliant David Gyasi’s escaped slave. It is largely played straight, aside from Tom Hanks murderous doctor and Hugo Weaving’s villainous slave trader.

While Hanks scores yet again with one of his trademark Everyman characters – this time the far-future Valleyman, Zachary in 2321, fighting off cannibal raiders, the Wachowski’s tour-de-force is the Big Brother nightmare of New Seoul, 2146; a bonkers sci-fi adventure that lifts I Robot, Minority Report, THX1138 and, most importantly, Blade Runner. Here, Korean actress Doona Bae is utterly mesmerising as the Fabricant (clone slave) Sonmi351, beginning the rebellion.

Each actor gets a lead role carrying one of the stories as everyone else supports them (with the exception of Hugh Grant who is terrible in all of his six minor roles).

As you can already tell, Cloud Atlas is hugely derivative, where almost every scene has its origins in other movies. Even the inter-cut spaghetti of six plots has precedence in DW Griffith’s great but politically unsound 1916 Intolerance – four historical narratives of persecution from ancient Babylon to the twentieth century US, intertwined; much like Crash or Disconnect have done lately.

Also, Cloud Atlas is a ridiculous stew-pot of ideas; freedom and revolution, establishment and subversion; love, loss, regret, sacrifice, personal quests, not to mention musings on heaven and the afterlife, karma and the transmigration of souls. It is a real stretch to inter-connect all this in any coherent narrative arc, so despite its many, many failings, you have to give it a prize for ambition. In fact, Cloud Atlas’ brand of philosophical twaddle succeeds much better than The Life of Pi and Terrence Malick’s Tree of Life, largely because in each tale there is a strong redeeming thread of romance or friendship.

The production of Cloud Atlas treads a dangerous path of borderline racism in attempting to ‘transform’ all the principal players; African American Halle Berry gets to play a white European Jew, Doona Bae a ginger WASP American, while everyone else gets to be (sometimes comically) Korean. Someone should have explained that not everyone is cut out to be Daniel Day Lewis. The actors are all at their best when unencumbered by prosthetics.

Side-note: Hugo Weaving makes a truly ludicrous latterday Nurse Ratchett, Tom Hanks does inexcusable Irish and Scottish accents; none of the non-Koreans look even remotely Korean, even after hours in the make-up chair.

At just under three hours of tightly intercut stories, it is also very long. Fortunately it rattles along and I’m going to thank Twyker for that since the Wachowskis have no track record for economy. While in many places it is clumsy, clunky, and just not very well directed; you spend too much time as in John Huston’s ‘thriller’ The List of Adrian Messenger, spotting the actors under the prosthetics; in others, the A-list talent just blows you away.

Ignoring the dubious philosophy-101 under-pinning (blame Mitchel’s source material for that), it’s intelligent, hugely ambitious, the action set-pieces are audacious, the comic relief touchingly funny, the sentiment rather too sentimental and each of the six plots could have made a decent standalone short movie. All of which are probably the reasons why Clous Atlas tanked at the box office; it’s both too little and too much and a mass audience used to overblown Michael Bay cliches probably scratched it’s empty head and went ‘meh.’ As if Cloud Atlas was ever going to break out and pull in a mass audience. It is several genres of movie guilty pleasure, which is the only way to view it.

Think of Cloud Atlas as a genre-crossing smorgasbord with a vast selection of dishes. Enjoy what you can and move on over the rest.

Robin Catling gained degrees in both arts and technology which led to a diverse portfolio of employment. A freelance systems analyst, project manager and business change manager for the likes of American Express, British Airways and IBM, he moved on to web design, journalism and technical authoring. He has also worked in film and television, both behind and in front of the camera, including productions by Steven Spielberg, Martin Scorcese, Ron Howard and Ridley Scott. A qualified three-weapon coach, he runs West Devon Swords teaching sports fencing to all age groups, and in recent years qualified with the British Federation of Historical Swordplay to teach medieval and renaissance combat in the Historical Western Martial Arts.
View all posts by Robin Catling »
« Opinion: Web Design Trends 2014
Review: Edge of Tomorrow (2014) »