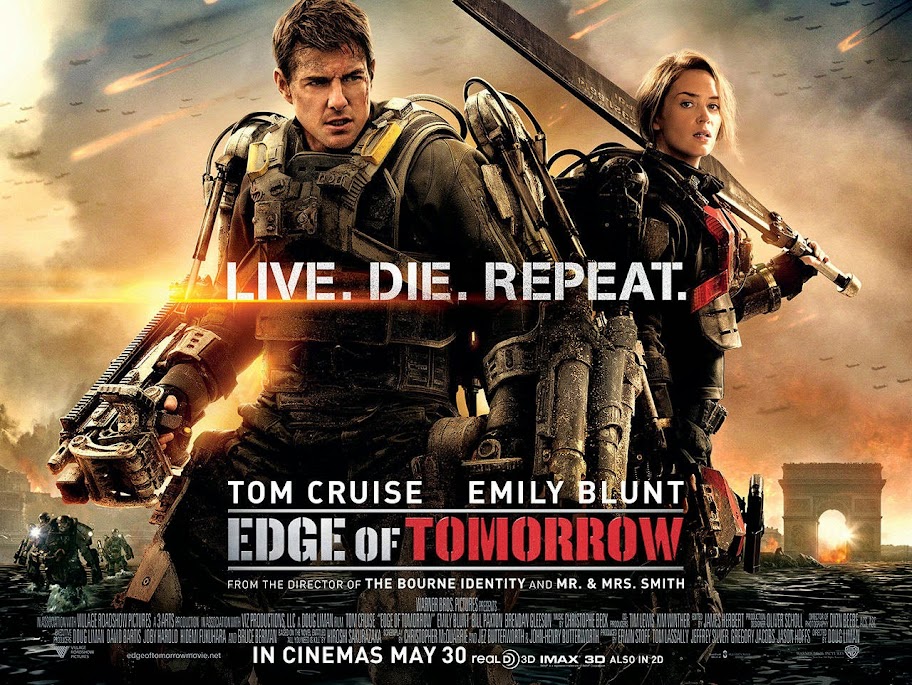 Always watchable Tom Cruise fights another War of the Worlds in this rollicking, timey-wimey, CGI-laden Groundhog Troopers. Or should that be Starship Groundhogs? Or possibly Independence Groundhogs?

Five years after meteorites crash land carrying an alien invasion force, cowardly PR slime-ball Will Cage (Cruise) is sent to the front-line as cannon-fodder and is killed almost immediately – only to wake up again at the start of the previous day. Somehow he’s been infected with the aliens’ ability to ‘reset’ time. Under the training of Rita Vrataski (Emily Blunt), Cage lives the same day over and over; but foreknowledge of the battlefield doesn’t prevent the failure of the human counter-attack. Instead, the pair have to find a way to kill the alien central ‘mind’ before the attack even happens.

This is of course, a high concept, big budget block-buster movie, Groundhog Day wrapped in Independence Day colours, wearing dirtied-down hardware from Aliens and a host of computer games; the success of which relies on you ignoring the utter implausibility of the concept. Yes, once again we’re going to travel to the past to save the future, but in this case, do it with style and a big dollop of knowing humour.

On it’s own terms, the relentless action set-pieces just about hold it together, with Cruise, Blunt, Gleeson, a hard working bunch of multi-national actors from J Company and an army of special effects wizards. The aliens are a bio-mechanical horde of distinctive, if not entirely unique foes – shades of HR Gieger’s Alien, Species, bits of Star Wars, and huge chunks of Starship Troopers.

Vast landscapes of CGI mayhem and destruction are wrapped around Cruise as he turns from Jerry McGuire into his own heroic characters from Mission Impossible and Oblivion. The budget is all up there on the screen, expertly marshalled by accomplished action director Doug Liman (Bourne Identity, Mr and Mrs Smith) from a tight script by Chris McQuarry (Usual Suspects, Jack the Giant Slayer), Alex Kurtzman and D.W. Harper from the 2004 novel All You Need is Kill by Japanese author Hiroshi Sakurazaka.

Among the supporting players, Brendan Gleeson (Troy, The Guard) is always welcome but gets little to do as the Allied commander in chief. Bill Paxton is Master Sergeant Farrell, saving a cliched, Full Metal Jacket, Deep South Kentuckian career NCO just by being Bill Paxton.

Emily Blunt (Adjustment Bureau) calms the fever-pitched script despite being cast as the typical adolescent fantasy female with a big sword and a variety of guns, but still has to play second fiddle to Cruise, with zero chemistry between them.There’s some satisfaction to be gained as she kills him day after day in training until he comes close to getting it right. There’s a little Groundhog Day grim humour in Cruise’s repeated maimings and deaths, but when we get to Turning Point 5 in Act Two (forulaic and derivative? Never!), it all gets rather po-faced and serious.

By the time we get to a CGI ruin of Paris, we’re firmly in computer game territory. And the time ‘reset’ conceit makes even less sense.

Cruise at least puts in the effort to transform from putz to super hero, and there’s hard physical labour in all the running, jumping, knockabout (at least until the CGI replacement takes over). It’s big, brash and by the end, fairly stupid; strip it back and there’s a decent pulp sci-fi yarn circa Heinlein or Harry Harrison, 1968, decently realised. Which is no bad thing. RC

Robin Catling gained degrees in both arts and technology which led to a diverse portfolio of employment. A freelance systems analyst, project manager and business change manager for the likes of American Express, British Airways and IBM, he moved on to web design, journalism and technical authoring. He has also worked in film and television, both behind and in front of the camera, including productions by Steven Spielberg, Martin Scorcese, Ron Howard and Ridley Scott. A qualified three-weapon coach, he runs West Devon Swords teaching sports fencing to all age groups, and in recent years qualified with the British Federation of Historical Swordplay to teach medieval and renaissance combat in the Historical Western Martial Arts.
View all posts by Robin Catling »
« Movie Catch-up: Cloud Atlas (2012)
How-to: View and clear SSL Certificate Exceptions on Firefox »