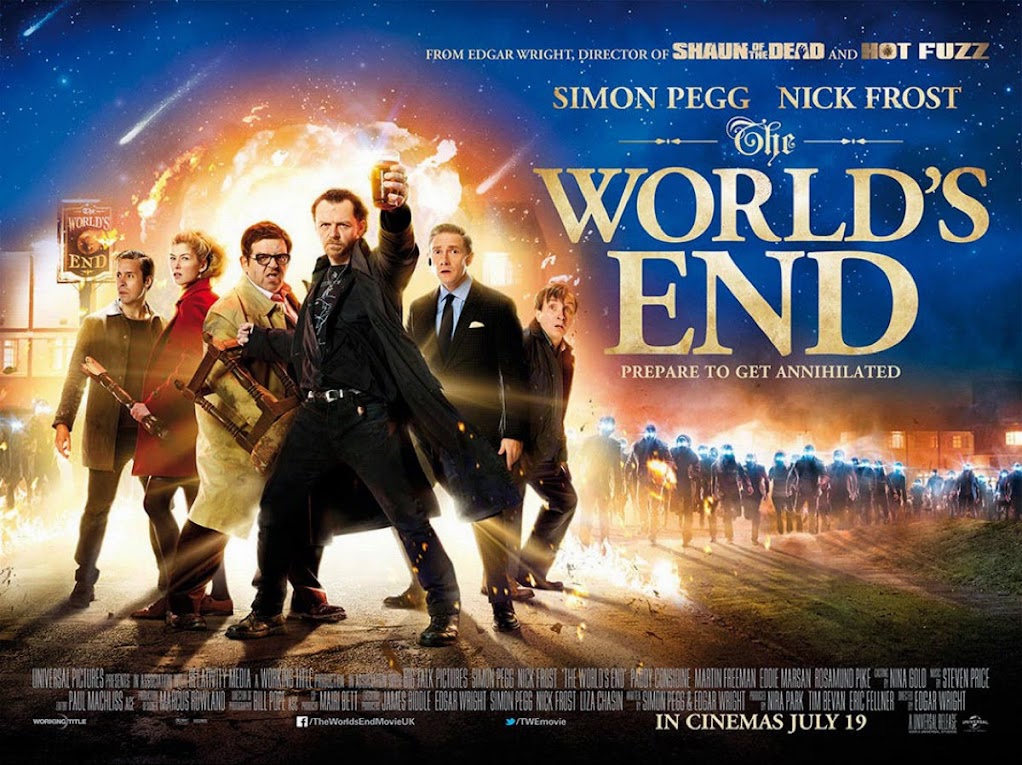 Edgar Wright and Simon Pegg’s third instalment of the pretentiously labelled Cornetto triology delivers yet another bizarre and slightly desperate genre mash-up. As top-notch British actors uncomfortably mix profanity, slick martial arts action, and big-effects sci-fi, one wonders what we could have had if the touching buddy-comedy-drama had been left to play it straight.

There are laughs and superb performances, but it’s all undercut by the desperate silliness of alien killer robots.

Leader of the pack Gary King (Pegg) was too-cool-for-school and yet comes out of rehab an empty middle-aged shell, a perpetual adolescent whose life never bettered his first attempt at the Mile, aged seventeen. In a vain attempt to recapture lost youth, by lies and blackmail Gary reassembles the Five Musketeers, all successful adults. Pegg’s performance is a triumph; a character so irritating, vain, ignorant and dislikeable we should hate him, yet so charismatic, vulnerable and complex that somehow he retains our sympathy (almost) all the way.

Sadly Wright and Pegg can’t write female characters, so Rosamund Pike as Freeman’s sister and the object of affection for Pegg and Considine, gets very little do do aside from a couple of acid put-downs.

In the second half we move into familiar Wright/Pegg/Frost territory. Newton Haven is that English Stepford, a suburban town so normal, so conventional, so creepy, so wrong; populated by robotic residents who turn out to be… robots (no spoilers, its in the trailers). World’s End becomes another Invasion of the Body Snatchers, with Shaun and Hot Fuzz chase sequences cranked up to eleven, some impressively choreographed action set-pieces, a wadge of CGI and a climax that comes stright off the wacky, almost-Douglas-Adams sci-fi hotch-potch of the BBC’s litle-lamented Hyperdrive. There’s also a slightly queasy school disco sequence straight out of Lesbian Vampire Killers (never a good idea), to a climax which is pure Mad Max.

While the chemistry between the principals is great, all the way through, you know the cast are having way too much fun making this comedy than we are watching it; that’s never good for a movie, either (e.g. anything by Seth Rogan, Will Ferrell, Jim Carrey).

Repertory players Mark Heap, Kevin Eldon and David Bradley turn up amongst cameos from the likes of Reece Shearsmith and their second Bond-villain, Pierce Brosnan. There are plenty of laughs from the dialogue and some of the visual gags, but overall, it’s the buddy-movie that works and the over-wrought, hackneyed sci-fi that fails. Pegg’s Run, Fatboy, Run was no masterpiece, but at least it was consistent.

There was so much promise in the first half, this could have been the next Full Monty and a worthy successor to Hot Fuzz, if only they’d had the courage to play the drama and not the genres. RC

Robin Catling gained degrees in both arts and technology which led to a diverse portfolio of employment. A freelance systems analyst, project manager and business change manager for the likes of American Express, British Airways and IBM, he moved on to web design, journalism and technical authoring. He has also worked in film and television, both behind and in front of the camera, including productions by Steven Spielberg, Martin Scorcese, Ron Howard and Ridley Scott. A qualified three-weapon coach, he runs West Devon Swords teaching sports fencing to all age groups, and in recent years qualified with the British Federation of Historical Swordplay to teach medieval and renaissance combat in the Historical Western Martial Arts.
View all posts by Robin Catling »
« How-to: Marketing the Brand ‘New You’ Part III
How-to: Add users to administer a Facebook business page »