Movies: Warlords at the Earths Core That Time Forgot 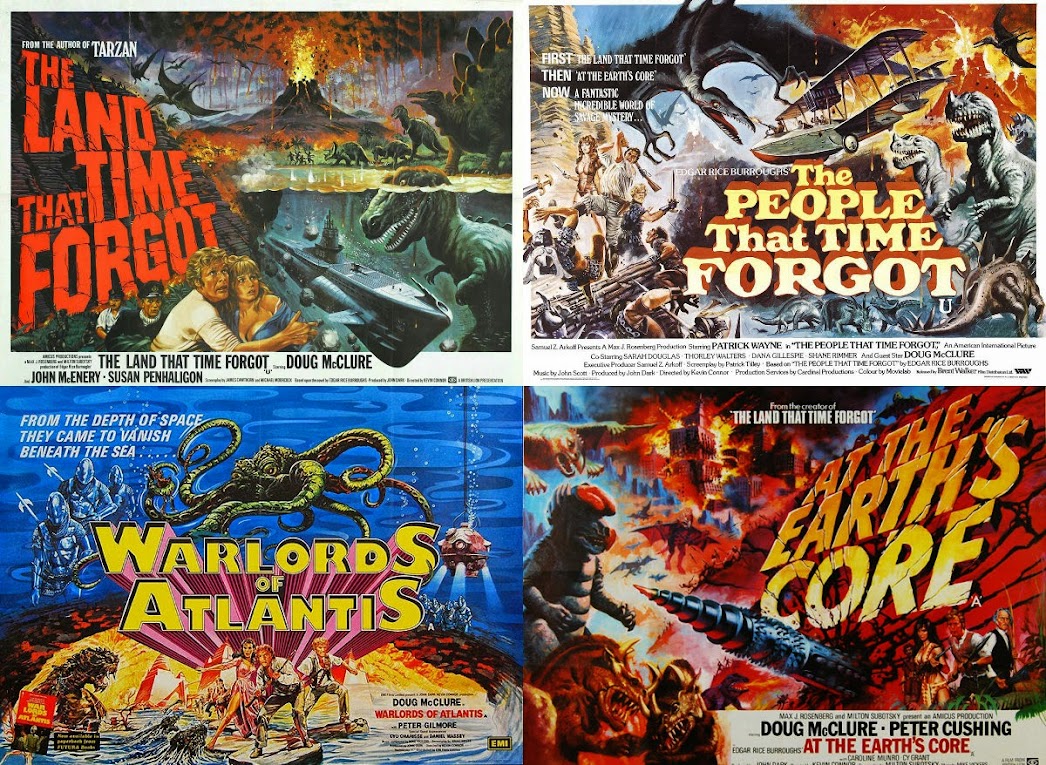 A quartet of British B-movies that rode the coat-tails of big budget Hollywood sci-fi and fantasy. A not-quite golden age of British retro-sci-fantasy cinema featuring a menagerie of rubber monsters, including Doug McClure…

Guilty pleasures don’t come much guiltier than these from defunct British studio Amicus, featuring McClure (TV’s The Virginian) as their International star ‘name’, alongside the best of British.

With a new wave of American sci-fi, Planet of the Apes, Westworld, making big bucks at the box office, these four ambitious, low-budget, strictly genre B-movies were part of independent British studio’s last hurrah, eclipsed by Close Encounters and Star Wars, even as their run came to an end. Cheesy, cliched and, in places, laughably tacky, they are prime examples of ripping adventure yarns beyond anything the technology could deliver until Jurassic Park.

Harkening back to Saturday morning serials and early colour advnetures such as Tarzan and the Lost City, Amicus mined heavily the works of Edgar Rice Burroughs to rival HG Wells and Jules Verne, to produce bold Edwardians in waistcoats, battling monsters in fantastical settings.

To be fair, this was the continuation of a long line of genre movies from the 60’s; The Lost World and Rod Taylor’s classic The Time Machine. Whilst lacking the stop-motion monster talents of Ray Harryhausen (Jason and the Argonauts, Mighty Joe Young), creative British effects wizards from the Gerry Anderson (Thunderbirds) stable and the Bond series made the most of models, puppets and back-projection.

Each of the four followed a tried and tested formula; a small band of modern-day adventurers discover a lost land of ancient and/or mythical beasts, overthrow a dictatorship and escape back to the modern world; usually after blowing up everything in sight. 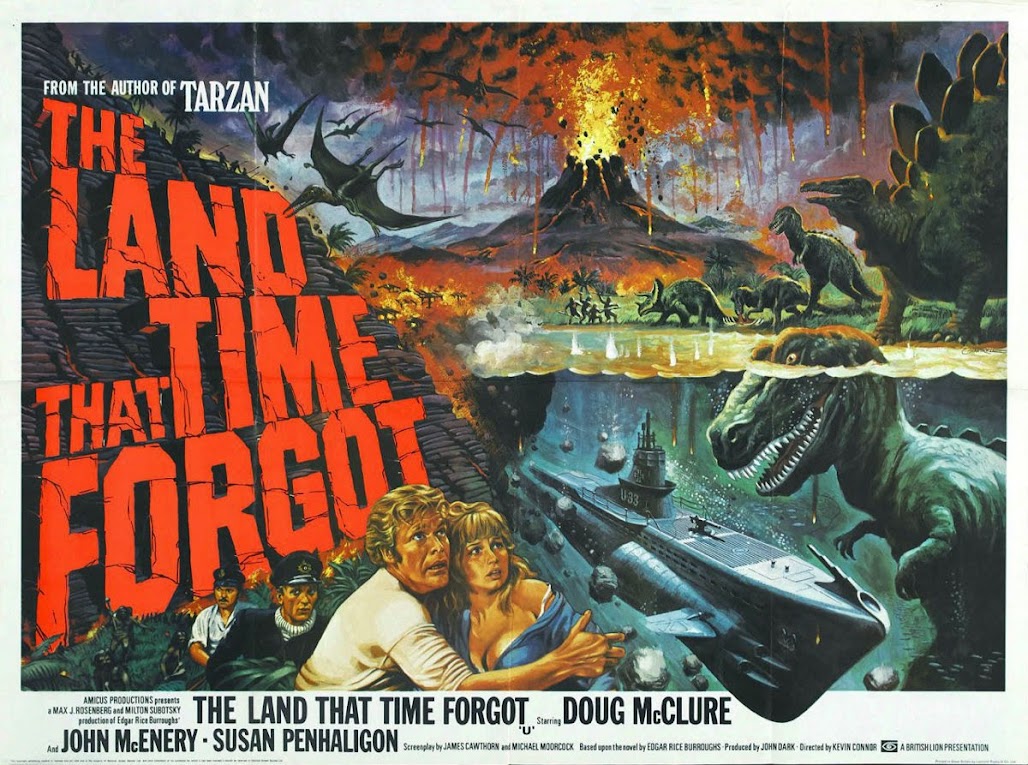 The Land That Time Forgot was a straight Burroughs adaptation, based on Burroughs’ 1918 science fiction novel; a WWI German submarine holding American prisoners of war runs aground on an uncharted island in the Antarctic; battling dinosaurs and cavemen, McClure, John McEnery and sit-com stalwart Keith Barron fail to escape, with McClure and leading lady Susan Penhaligon (Bouquet of Barbed Wire) marooned and throwing messages in a bottle into the ocean. 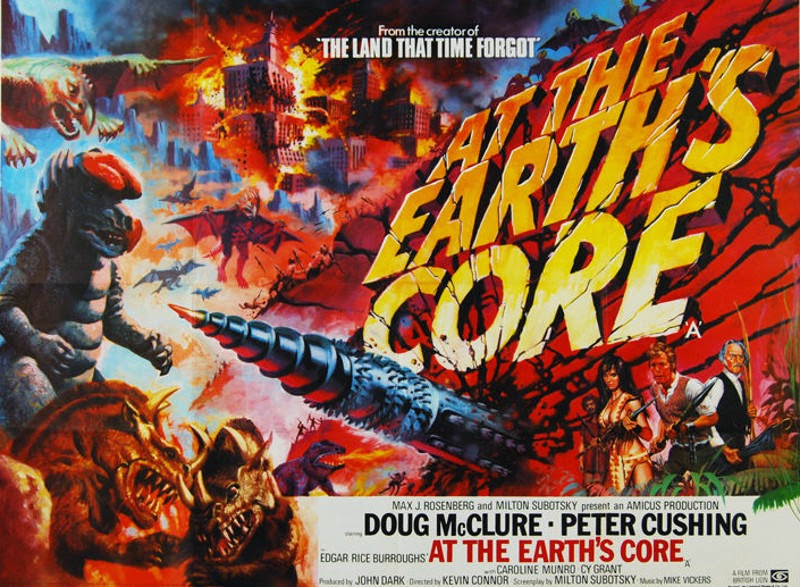 1976’s At the Earth’s Core was a lightning follow-up (read: cash-in). McClure returned, partnered with the legendary Peter Cushing (Star Wars), playing the dotty old scientist. Essentially a juvenile knock-off of The Time Machine, McClure and Cushing drill into the underground land of Pelucidar and have to overthrow psychic reptile overlords the Mayhars to escape. The Mayhars were well-concieved and quite scary – right up to the point where they flailed about suspended on piano wire, rubber feet flapping.

Without looking up the budget, Earth’s Core was the quickest made and looks the cheapest of the four. The derring-do and buckets of fire FX in At the Earth’s Core is fatally undermined by the stiff rubber fire-lizards and the worst man-eating tantacled plant seen since Ed Wood in the 50’s. Cushing clowns and cavorts, McClure does cowboy fist-fights and it’s left to Bond-girl and teen fantasy Caroline Munro (The Spy Who Loved Me), whose sultry charms decorated many a British bedroom wall (including mine) to add some glamour. 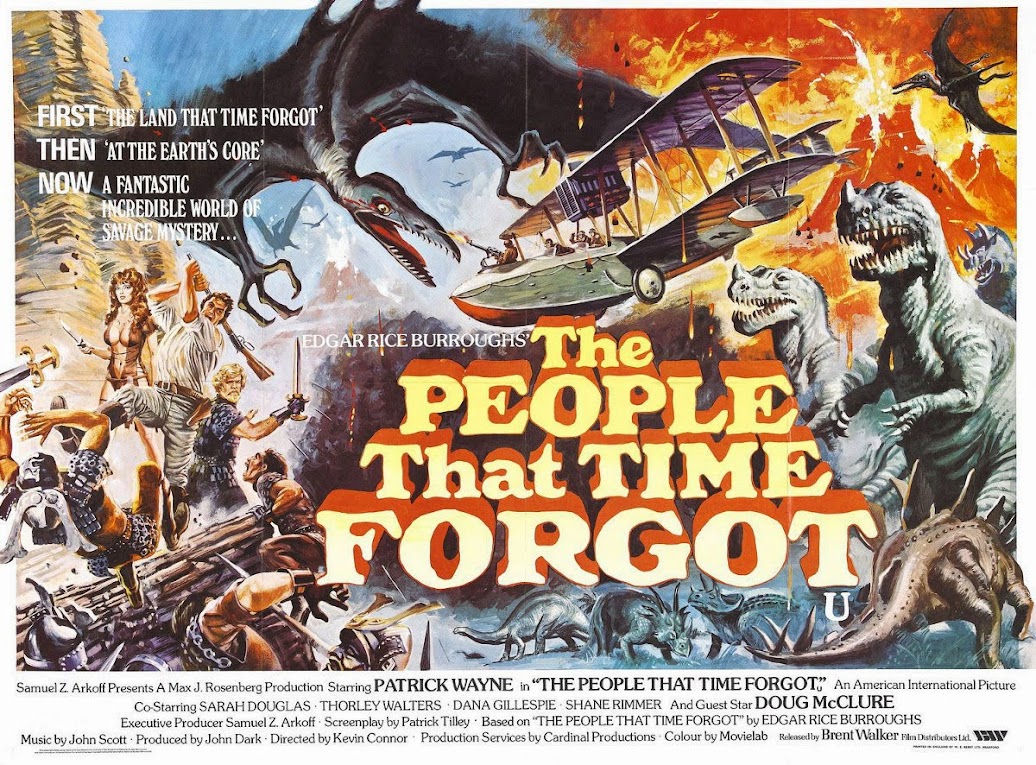 Cue 1978 sequel The People That Time Forgot with handsome but wooden Patrick Wayne (Seventh Voyage of Sinbad) in search of McClure for a repeat run, Sarah Douglas (Superman II, Stargate SG1) joined another cast of inexpensive Brits with a cameo from McClure in a re-run of Land. Star Wars‘ man in the Darth Vader suit, Dave Prowse, appears as a heavy. 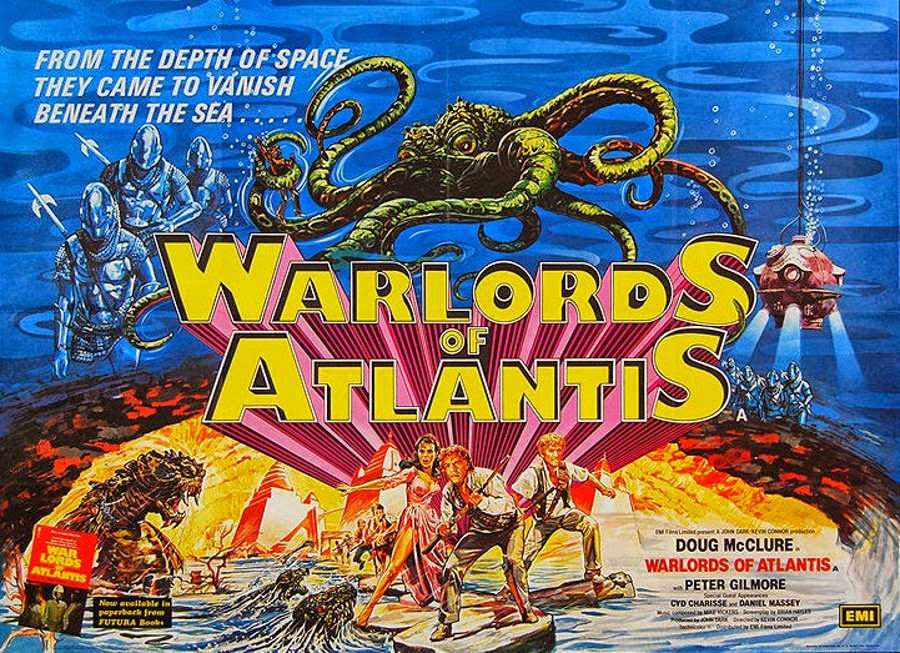 The ambition of Warlords is stunning, even if the glove-puppets and poor back-projection let it down. A long and complex script with a dash of Treasure Island treachery thrown in, with banter aplenty, it tried, with fire and noise to compete with the blockbusters of its day. Character actors and favourite Yanks Shane Rimmer (repeat Bond performer) and John Ratzenburger (pre-Cheers) added some class, while Lea Brodie failed to set the screen alight as the heroine.

These days, the Amicus adventures are guilty pleasures; genre B-pictures with laughably low budgets, poor scripts and poor effects. But somebody got them made, a lot of people went to the cinema to see them, and they are Sunday matinee regulars on TV to this day. They have a certain whimsical charm and, at their heart, rollicking good adventures. Yes, they were overtaken by bigger and better movies at the cutting edge of new film-making technologies, but take a look at the Oscar-winning, yet dated prosthetics of the original Planet of the Apes franchise. Think how poor is the script and much of the execution of Star Wars. And remember the sparing use of the rubber shark in that grand-daddy of creature-features, Jaws? I just know that some Sunday afternoon, I’ll be sat in front of these, yet again. RC

2 thoughts on “Movies: Warlords at the Earths Core That Time Forgot”